Vijender Singh is proud to hold up India in his U.S. pro Debut this Saturday in Newark 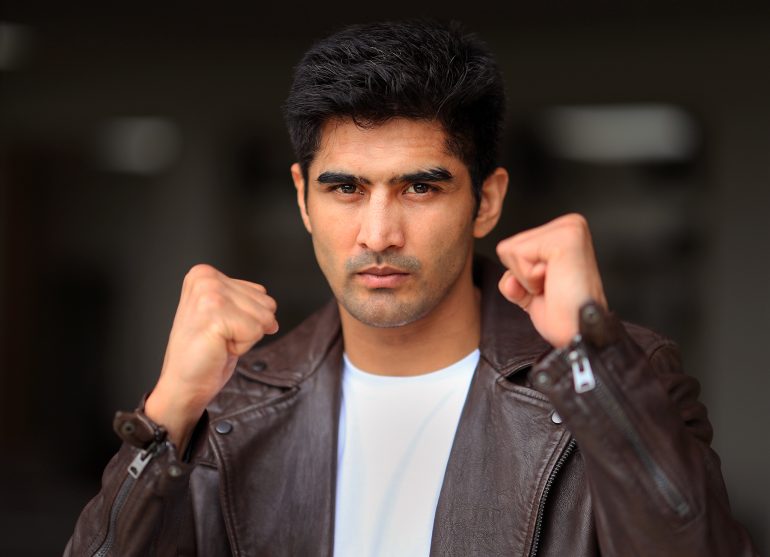 Vijender Singh is ready for is his U.S. pro debut. Photo courtesy of Top Rank.
11
Jul
by Joseph Santoliquito

Vijender Singh considers it a welcome burden. India’s first Olympic boxing medalist can still feel the flag of his country and the weight of 1.3 billion people on his shoulders. The 5-foot-10, 33-year-old can feel their presence each time he throws a punch; each time he ducks away; each time he wins. Singh, who grabbed a bronze medal as a middleweight at the 2008 Beijing summer Olympics, will be making his United States debut this Saturday on the Shakur Stevenson- Alberto Guevara undercard from the Prudential Center in Newark, N.J.

Singh, who was training in London, England, landed on Monday and he’s already been greeted by a number of fans from India during his brief stay in Newark, and still more should fill the Prudential Center for Singh’s fight against Mike Snider (13-5-3, 8 knockouts) in an eight-round super middleweight bout.

“It is very important to me to represent India,” Singh said. “There have been so many people that have come to see me fight, it is sort of a responsibility to do well for them. They are my people and they give me more power than pressure. India knows Floyd Mayweather, they know Canelo Alvarez and Manny Pacquiao.

“India respects those kinds of fighters. It means a lot to the people in my country that I did well in the Olympics, so when it’s my time to turn pro, they have followed me. It means so much to me for people to come and see my fights. You don’t want to let them down.”

Singh’s distinguished amateur career and Olympic success includes beating former two-division champion Badou Jack, 13-2, in the opening rounds of the 2008 Olympics. He reached the semifinals, where he lost to Cuban Emilio Correa, 8-5, though it was good enough to secure a bronze medal. In 2009, he won bronze at the 2009 World Championships, where he beat middleweight contender Sergiy Derevyanchenko, and a gold medal at the 2010 Asian Games.

Saturday marks the first time Singh has fought since Dec. 23, 2017, when he won a 10-round decision over Ghana’s Ernest Amuzu. Since then, Sigh has been hoping for a title shot. He made the move and signed with top Rank in November, 2018.

“People are excited,” Singh said. “I am. This is a great opportunity.”

Singh, whose extensive amateur background includes fighting in tournaments in Chicago and New York, is a major celebrity in India, including making appearances in Bollywood films and on the popular Indian dance reality show, “Nach Baliye.”

He says the time difference, coming from England, won’t affect him. He’s been able to balance the media demand with getting in some training. Three of Singh’s last four fights have gone 10 rounds.

Routine is important, though the travel has meddled too much with Singh’s preparation. His amateur background has acclimated him to adjusting to different environments and fight times.

Snider is 5-foot-9½ and is 38. Singh has a good understanding of what he can do, watching Snider fight on YouTube.

“My weight is good and I’m looking forward to it,” Singh said.

With a nation on his back watching his every move.