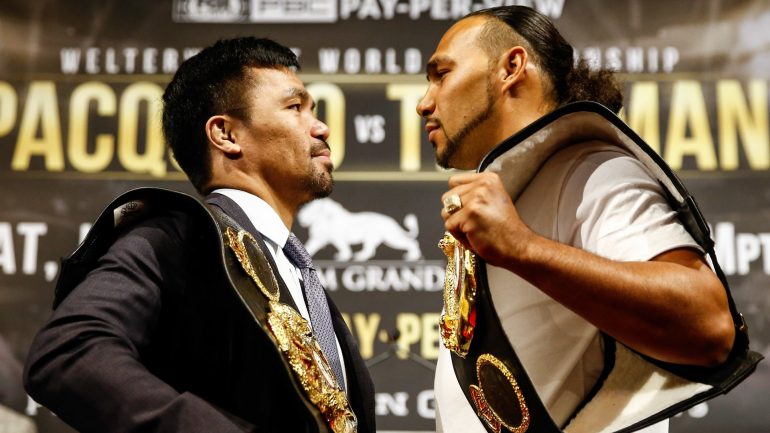 Manny Pacquiao and Keith Thurman stare each other down during the kick-off presser for their July 20 crossroads welterweight title bout.
09
Jul
by Joseph Santoliquito

Keith Thurman isn’t afraid to refer to himself in the third person. “One Time” wants to create his own mark and create his own legacy and the avenue towards those goals goes through a legend, when he meets Manny Pacquiao on Saturday, May 20, on PBC’s FOX Sports Pay-Per-View show from the MGM Grand Garden Arena, for the WBA welterweight title.

Thurman (29-0, 22 knockouts, 1 no-contest) spoke to the media on Tuesday during a conference call and addressed everything from the January 26th fight in Brooklyn against Josesito Lopez, to facing someone like Pacquiao (61-7-2, 39 KOs).

The most pressing concern seemed to be what Thurman learned from the fight versus Lopez, who had Thurman in the most trouble he’s faced as a pro in the seventh round.

Did Thurman’s performance against Lopez stir doubt as to whether Thurman may not be as good as he thinks he is? Are there cracks in his façade? Did those fissures open the door to this chance against Pacquiao?

One Time quickly chopped that theory down.

“That’s been the talk of the town ever since they talk about the fight, you know,” Thurman said. “At the end of the day, who cares, right? This still is the most exciting fight of the year. You had Errol Spence versus Mikey Garcia. That didn’t hold up to the hype. Thurman fights, it’s a great fight. I think Keith Thurman all great welterweight fights from here on out.

“I think I’m the most exciting fighter in the welterweight division today. Not only did the (Lopez fight) might show some weakness and might give them a little bit of confidence, but outside of that, like (Leonard) Ellerbe mentioned, Keith Thurman has the best resume at 147. Two years out of the game and I still have the best resume at 147.

Thurman is right about that. But his little tirade sounded as if he was trying to convince himself of something.

One Time admitted he wasn’t in great condition against Lopez. He said he trained himself at night at LA Fitness for Lopez on a spin bike. For Pacquiao, Thurman has hired two conditioning coaches. He says he’s applying himself in “a better fashion” and it should be displayed, Thurman stressed, against Pacquiao.

Thurman said the seventh round against Lopez was a gamble. If Thurman wants to look better than that, it means a greater investment. When Thurman was asked if too much was being made about the seventh round of the Lopez fight, One Time responded, “Hey man, you talk about what you see, right? I remember when Keith Thurman first hit HBO, I remember talking to Max Kellerman back stage and asked him what he thought about the performance.

“He said, ‘You did good, Keith, but happens the day you get hit?’ I thought to myself. ‘Max, you want to hit me and find out?’ Because you don’t know Keith Thurman, you don’t know what I did at the age of 15. You don’t know the road that I’ve been on. All that you know is there was this dude named Victor Ortiz at the time and he got beat up and almost cried on national TV.

“It was probably one of most vulnerable rounds of my career to date. A lot of fighters wouldn’t have been able to get out of the round the way that I did. To me, it’s just evidence as to how great I truly am.”