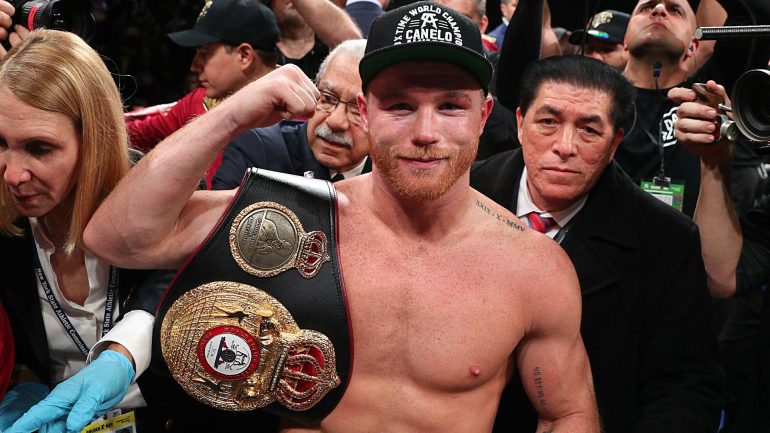 The IBF has ordered a purse bid for the defense of its middleweight title between titleholder and The Ring champion Canelo Alvarez and mandatory challenger Sergiy Derevyanchenko, the sanctioning body announced Tuesday afternoon.

The purse bid for Alvarez-Derevyanchenko is scheduled for July 23 at 12 p.m. ET.

According to the release, Alvarez was ordered by the IBF to negotiate with Derevyanchenko on May 15, 11 days after winning the IBF title from Daniel Jacobs by unanimous decision in Las Vegas.

The IBF recently received a written letter from Alex Dombrof, Esq., who represents Derevyanchenko, indicating they were no longer willing to participate in negotiations and requested an immediate purse bid, in accordance with IBF rule, 10A.

Both Golden Boy Promotions, which represents Alvarez, and Derevyanchenko’s team (which includes promoter Lou DiBella and manager Kevin Connolly) reportedly never reached out to one another. Alvarez has stated in recent interviews he would not fight Derevyanchenko.

Alvarez’s decision to not fight Derevyanchenko or enter into negotiations would force the IBF to likely strip Alvarez of the title, which could open the door for Derevyanchenko to possibly fight Gennadiy Golovkin in the fall. The irony of this is Golovkin was stripped of the IBF title in June of last year for failing to defend the title against Derevyanchenko after receiving an exemption from the sanctioning body when he faced Vanes Martirosyan one month earlier on the promise he would fight Derevyanchenko.

Golovkin is currently ranked No. 3 by the IBF, with the No. 2 slot open.

Derevyanchenko (13-1, 10 knockouts) and Daniel Jacobs did fight for the vacant title on Oct. 27 in New York City with Jacobs winning by split-decision. Derevyanchenko returned to the win column in his last bout on Apr. 13, defeating former world junior middleweight title challenger Jack Culcay by unanimous decision.

“The IBF is just following their guidelines and bylaws,” promoter Lou DiBella told RingTV Tuesday afternoon. “Sergiy won the eliminator (against Culcay) and we haven’t heard a word from Golden Boy (after the Jacobs fight). Canelo is going to do what he wants to do. He doesn’t have an interest in fighting Sergiy, who should be rewarded for following what the IBF has mandated. We (including Connolly and Al Haymon) are thrilled with this opportunity, if a fight gets made with ‘GGG.’”

There have been rumors of Alvarez moving up two weight classes to face WBO light heavyweight titleholder Sergey Kovalev or fighting a third bout with Gennadiy Golovkin on Sept. 14, which would be part of the Mexican Independence Day weekend. Kovalev and Golovkin have reportedly been approved by DAZN as the only opponents the streaming service wants Alvarez to fight next.

If no fight is made between Alvarez and Golovkin for Sept. 14, word is Golovkin could fight in mid-October.