Teofimo Lopez finds himself a better fighter, because he’s in a better place 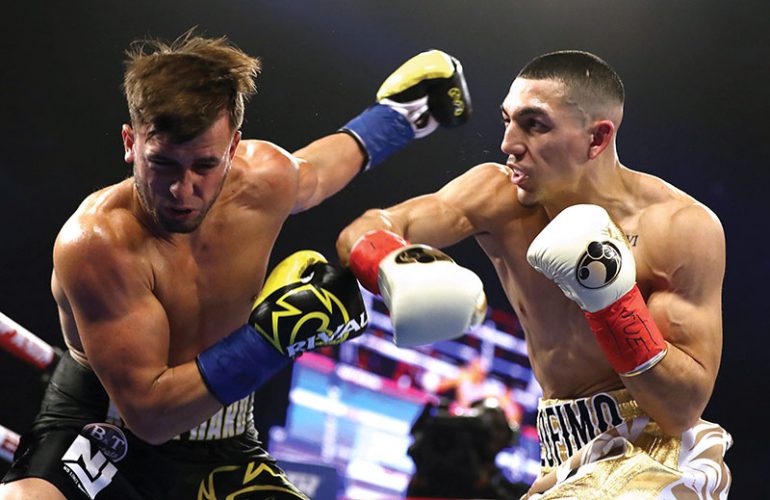 This isn’t like most love stories. This one starts with a fighter with his earplugs in and hoodie up, jamming a bursting gym bag into an overhead compartment in coach of a red-eye flight to Las Vegas. The bag had a pair of worn boxing gloves hanging from the side.

“Nice gloves,” said a passing stewardess. “What do you do?”

Lopez then sat and noticed something else about the inquisitive Delta flight attendant: The row of turning heads each time the striking stewardess passed a man on the plane back to Las Vegas.

This is a different Teofimo Lopez and Cynthia helped him arrive here.

He wears his hair out. He doesn’t buy needless, expensive things to find contentment. That comes more organically.

The vision of someone balanced, someone in control, was always there just beyond his fingertips. He always wanted to be someone different beyond the ring, not someone immersed in the party life. It was someone satisfied.

His sanctuary could be constantly found with his fists wrapped inside a pair of gloves.

“This is a whole different ballgame, and knowing that I’m not just an athlete, even though my family is amazing and they love me, but sometimes they forget that I’m more than an athlete,” Lopez said. “With Cynthia, she made me feel like I’m human, like I’m not a robot or anything.

“Before her, I used to buy expensive s— just to make me happy. You can call it dumb stuff. I would go to parties and VIPs with friends and buy bottles and have a good time. I wouldn’t drink.

“I mean I would spend $2,000 a week on stupid s—. It just changed the moment she came into my life. That’s when I knew. She’s more mature and she’s older than me, too. I always liked older women, because my mindset was always different. I’ve always thought of myself as older.”

Cynthia has been to Teofimo’s last four fights—all of which ended in knockouts.

“She’s nervous all of the time and gets anxious, it’s crazy,” Lopez said. “I know she loves me and cares about me. She closes her eyes. For this next fight, I’m surprising her by bringing her sister and brother-in-law up from Nicaragua.

“I already blew the surprise. I told her.”

Then, Teofimo stopped and addressed the pressing question at hand: How he is different? Did he feel there was a missing void in his life? How has marriage made him evolve into the person he always envisioned himself to be? 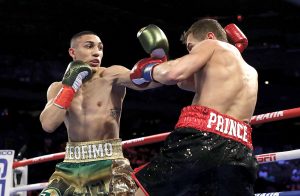 Powerhouse lightweight Teofimo Lopez (left) still has the same knockout hunger after meeting the girl of his dreams, proof coming in his fifth round knockout of Edis Tatli. Photo credit: Getty Images

“I’m happy,” Lopez said quite simply. “I feel better. I don’t feel like there is something missing, because before I met Cynthia, I always felt there was something missing in my life. All of the holes are filled. I have to say being with her made me realize a few things.

“When you know, you know. Cynthia never gave up on me, and I made it tough on her. My family can be tough on me sometimes and Cynthia was always there to bring me back up. There is a lot of pressure, and she keeps me grounded. That’s what I love about her.”

Lopez stresses his ring demeanor won’t change. That inner whirling dervish inside his head won’t dissipate. He won’t have to look for it, and Lopez brought up a salient point to this new stage of his life: “I’m still knocking motherf—— out!

“I’m still the hawk. I know who I’m going home to, and I know I have someone to calm me down. I’m still that vicious mother—–! I’ll still knock everyone out. But I’m just happy now. I have someone who really cares about me and is there for me.

“Money, the cars, the houses, that s— will be there. The thing you can’t buy is love and having your own family. Cynthia never wanted kids and now we want kids. I was flying coach and she didn’t know who I was.”

Fresh off of vanquishing Vitor Jones on May 12, 2018, in one round at Madison Square Garden, Lopez had his hoodie on, his earphones hugging his head and decompressing.

“I went back to talk her and asked her for some water,” said Lopez, laughing. “I told her I fought on Saturday. Every guy on the plane was looking at her.”

Lopez is getting ready to fight 5’11½” Masayoshi Nakatani (18-0, 12 KOs) at the MGM National Harbor, in Oxon Hill, Maryland, on ESPN+ next Friday, July 19, in his first main event. Nakatani will try to use his height and work off the jab to open up the left hook.

It will be a 12-round IBF title eliminator to fight IBF lightweight champ Richard Commey later this year.

“Money is a bitch, it changes everything around you, but none of it matters when you’re with someone you love,” said Lopez, who is thinking of moving to Seattle, Washington, next year. “Cynthia still works. I get to travel on Delta for free. It’s something else I liked about her—she’s independent.

“She knows what she wants. I tried to grab her so many times to be my girl, and we were both single. We both spoke every day. She denied me twice to be my girlfriend, but I didn’t quit. She’s changed my life.

“Cynthia is great with kids.”

Each June, Cynthia would make sure she took time off to volunteer in Seattle for Camp to Belong, a non-profit organization dedicated to reuniting brothers and sisters who have become separated in foster care through a week of camp in the summer and other events throughout the year.

“I told her that I’m going with her the next time she’s there,” Lopez said. “It’s sad. She cries every time she leaves the kids. She’s done it before she met me, and she wants me to go with her next year.”

Lopez just finished doing 10 rounds of sparring with Abraham Nova and says he’s ready for Nakatani. He’s training in Vegas, but is looking to hold his next camp in upstate New York, so he can be closer to Cynthia.

The other new component in his life is the barking dog in the background, Mr. Bruno, a silky terrier, mixed with Maltese. He’s Lopez’s emotional support dog, he says laughing.

He gets teased all of the time by his inner circle about being “whipped.” He’s not looking for that contrived anger engine to fuel him in the ring.

“I always hung out with a group of kids my age, and they always wanted to party, but I never felt I belonged there,” Teofimo said. “I knew what I wanted. I just needed someone who knew what they wanted. My wife has changed, too.

“I’m still explosive. A happy fighter is a dangerous fighter.”

From the red-eye to Vegas, to Oxon Hills, the love story is ongoing.