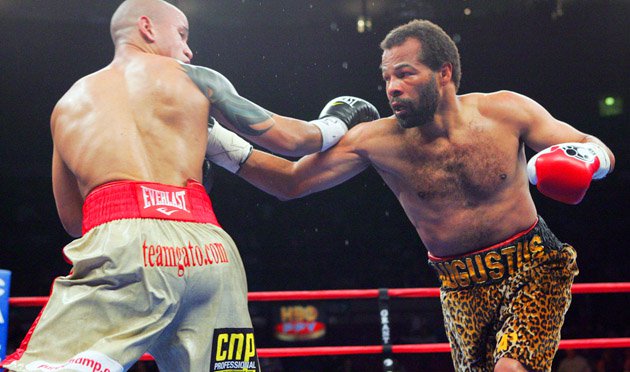 The Drunken Master in action. Photo by Ed Mulholland
03
Jul
by Anson Wainwright

Emanuel Augustus never won a world title but he would face anyone at short notice. His fighting heart and that unique and quirky style gained him something of a cult following in the late 1990s-2000s.

Augustus was born in Chicago, Illinois on January 2, 1975. His birth name was Emanuel Burton, but he changed to his father’s surname when his parents married in 2001.

When Augustus was just three years old, he was placed into foster care. He spent much of his formative years in that system, moving between families.

Brushes with the law were regular and he found boxing by chance. “I found out you can fight without going to jail,” Augustus said laughing. “I liked to fight.”

Augustus turned to amateur boxing at the age of 17. In his 25 bouts in the unpaid ranks he won some regional tournaments but lost during the qualifying stages for the 1992 Olympic trials.

Electing to turn professional in July 1994, Augustus won a six-round decision over Jerry Cooper in his debut.

But without a manager to steer his career, he often took fights at short notice and suffered losses to Jesus Chavez, Ivan Robinson and Diobelys Hurtado among others.

Always reliable in terms of putting on a good show, Augustus could also be dangerous, as he proved by defeating pre-fight favorites like Wilfredo Negron (MD 8), David Toledo (KO 10) and Freddie Ladd (TKO 8). After defeating Ladd, his modest record of 14-12-3 (6 KOs) was in no way a reflection of his ability in the ring.

But things didn’t get any easier. Augustus traveled to Denmark where he drew with Soren Sondergaard. He stopped hometown favorite Jon Thaxton in the U.K. but was stopped himself in the 12th and final round by Allan Vester, again in Denmark.

Upon his return he stopped the previously unbeaten Terrell Finger but dropped decisions to Antonio Diaz, John John Molina and Teddy Reid. As always, Augustus managed to get back in the win column and this time his return to form was rewarded when he was selected to face WBC junior lightweight titleholder Floyd Mayweather Jr. in October 2000.

The non-title bout was contested at lightweight, and although Augustus put forth a terrific effort, Mayweather’s greater class was decisive. The bout was stopped in the ninth, much to the loser’s chagrin.

The following summer Augustus took on the super-tough Micky Ward. The two went hammer and tongs for 10 rounds in The Ring Fight of the Year for 2001 and it was Ward who won via unanimous decision. 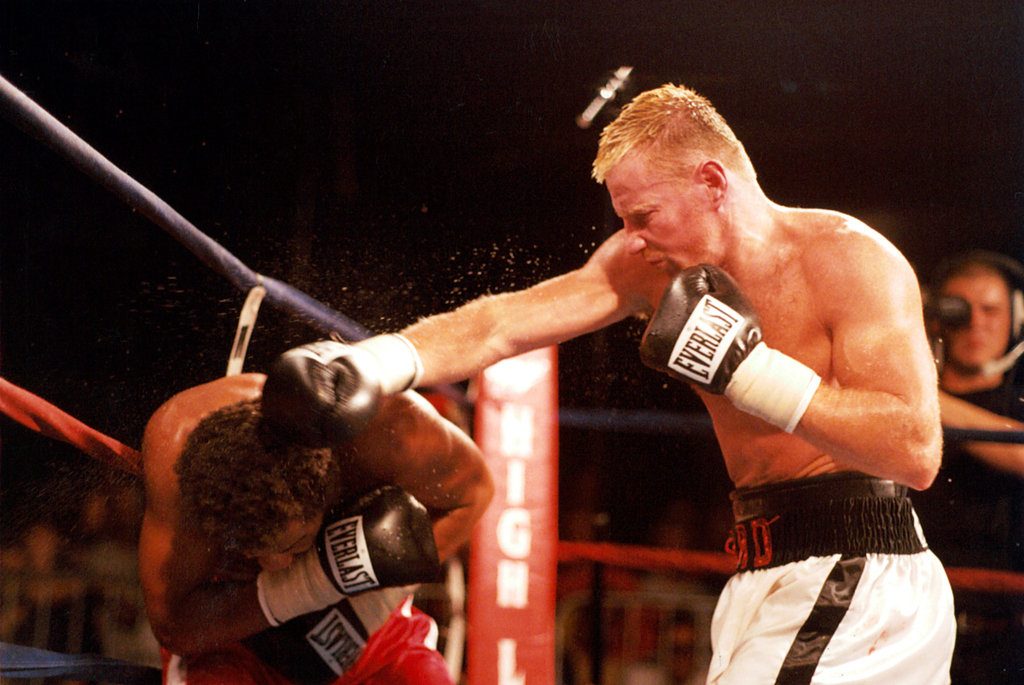 Under fire from Micky Ward in 2001. Photo from The Ring archive

Augustus was dubbed “Drunken Master” because of his unpredictable and extroverted style which – incredibly – was heavily influenced by characters in video games.

Close friend and confident L.J Morvant has known Augustus for nearly 25 years. “The man never turned down a fight, took ’em on short notice and could never tell you who he was fighting,” he said. “When he was fighting Mayweather and Micky Ward he didn’t know who they were. To me that’s hilarious because while most guys are studying boxing, he was playing video games. He actually picked up stylistic points from video games. To me that’s intriguing and separates him from every other boxer.

He continued his career, losing some, winning some and upsetting the likes of future lightweight titleholder Leavander Johnson (D 10) and Carlos Vilches (TKO 8). Later in the decade, he emigrated to Australia but the move didn’t work out and he returned home.

Augustus was one of the modern era’s best gate keepers, which is proven by the fact that his last four opponents were all unbeaten prospects looking to make their marks on the sport.

He competed for the last time when he lost a dubious decision to unbeaten prospect Vernon Paris in early 2011, exiting the sport with a record of 38-34-6, 20 knockouts.

The following year he gained further notoriety when pound-for-pound star Mayweather Jr. gave him enormous credit in an interview (see video below).

On October 13, 2014, in Baton Rouge, Louisiana, Augustus was shot in the back of the head and spent 10 days in a medically induced coma due to brain swelling.

He was in hospital for another six weeks and had a feeding and breathing tube before being transferred to a Touro rehab facility for another month to help with speech therapy among other things. Although he suffered a myriad of injuries, including being deaf in his right ear, double-vision and mild stroke he is doing very well.

“He misses the theater of competition more than anything and would compete again if given the chance,” said Morvant, who spends time with Augustus every day. “He shows more gratitude than anyone I know and always asks what more he can do to pay me back. In truth, I’m the one who feels like I owe him.

“It’s such an honor to be inspired daily by a man who refuses to make excuses or play victim. He often puts my own life into perspective and helps me to be more productive with his daily motto ‘Don’t talk about it, be about it.'”

Augustus, now 44, is engaged to Dorothy and has two children from a previous relationship. He lives in Baton Rouge and enjoys video games and going to the gym.

The former contender graciously took time to speak to The Ring about the best he faced in 10 key categories.

BEST JAB
Omar Weis: He was popping that thing from every direction. He changed his jab up in speed and power. Really good at jabbing going backwards. I couldn’t time his jab.

BEST DEFENSE
Floyd Mayweather Jr.: His jab and movement made it difficult to catch him clean. His shoulder roll made it hard to land clean head shots, so I punched his elbow, shoulder and forearms.

FASTEST HANDS
Mayweather: What he lacked in power he made up for in speed. After him everybody looked like they were in slow motion.

SMARTEST
Wale Omatoso: He set up that right hand over multiple rounds and changed it up. He’s the kinda’ guy that hits you so many times with the left that you’ll beg for the right. But he was outside of my weight class.

STRONGEST
Ruslan Provodnikov: Everything he touched me with had me saying, ‘Oh my God’. That dude was strong. I couldn’t back him up and was so strong that even the shots I landed were draining me.

BEST CHIN
Micky Ward: I kept catching him clean and he just kept coming. That fight was so fun. I’m not known as a big puncher but I just couldn’t hurt him with hard clean shots. We were in there slinging leather like two men possessed.

BEST PUNCHER
Provodnikov: Everything he hit me with hurt. Some guys you can block and some you better just make miss. It’s like he had bad intentions on everything. Even his jab hurt.

BEST BOXING SKILLS
Mayweather: I wasn’t a fan of his style but he did his thing. He had fast hands, good footwork and a defense that forced combos because his reflexes made it hard to catch him with one shot.

BEST OVERALL
Mayweather: As much as I hate to say it [laughs]. I didn’t see him as special then. I would have loved to fight him again at my weight of 140 pounds. He was good at what he did, though. Not being a big puncher forced him to excel in the things he became known for; good jab, speed, footwork, defense, counter-punching and distance control.