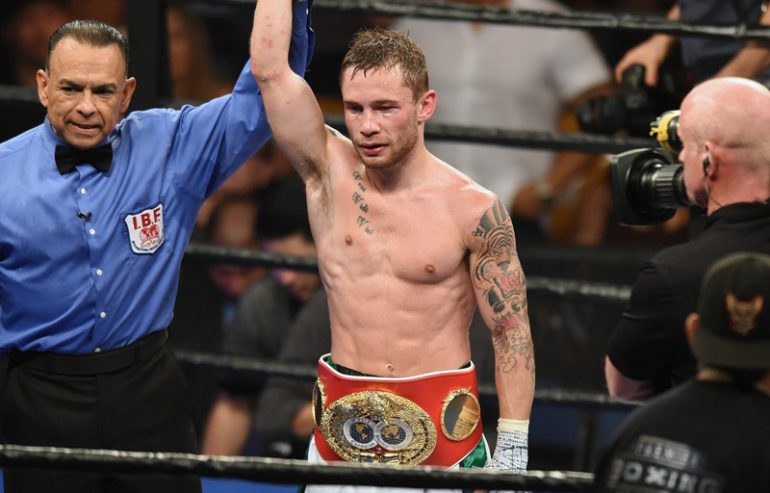 After a much-needed rest to recharge the batteries, former two-weight world titleholder Carl Frampton will return to the ring in what will be his debut bout under the Top Rank promotions banner.

Frampton, who is rated No. 5 by The Ring at featherweight, will face Emmanuel Dominguez of Mexico on Aug. 10, it was announced Tuesday. The 10-round bout will take place at the Liacouras Center in Philadelphia.

Frampton, who hails from Belfast, Northern Ireland, has not fought since losing a 12-round unanimous decision to IBF titleholder Josh Warrington on Dec. 22 in Manchester, England.

Top Rank’s plan is for Frampton (26-2, 15 KOs) to take on WBO featherweight titleholder Oscar Valdez, who has stated that he is open to facing the popular Irish fighter.

But for a fight with Valdez to take place, Frampton must first get past Dominguez.

“Dominguez is a tall, young, hungry featherweight, so I’ll need to be on my game,” said Frampton. “An Oscar Valdez fight is dangling in front of me, so I want to go out and show the world that I’ve still got what it takes to be a world champion. Winning is always the most important thing, but I want to do it in style. It’s great to be boxing stateside again. And Philly, in particular, has so much boxing history.”

Dominguez (26-8-2, 18 KOs), who resides in Aguascalientes, Mexico will be fighting for the fourth time in 2019 when he squares off against Frampton. In his last bout on June 8, Dominguez knocked out veteran Jose Roberto Gonzalez in the third round.

The 25-year-old has won four of his last five bouts, with his only blemish coming against the then-unbeaten Jordan Gill by knockout on Mar. 2.

“Carl Frampton is already looking ahead to an Oscar Valdez fight, which gives me added motivation,” said Dominguez. “I am not a steppingstone. I am coming to Philadelphia prepared to ruin Carl’s plans.”