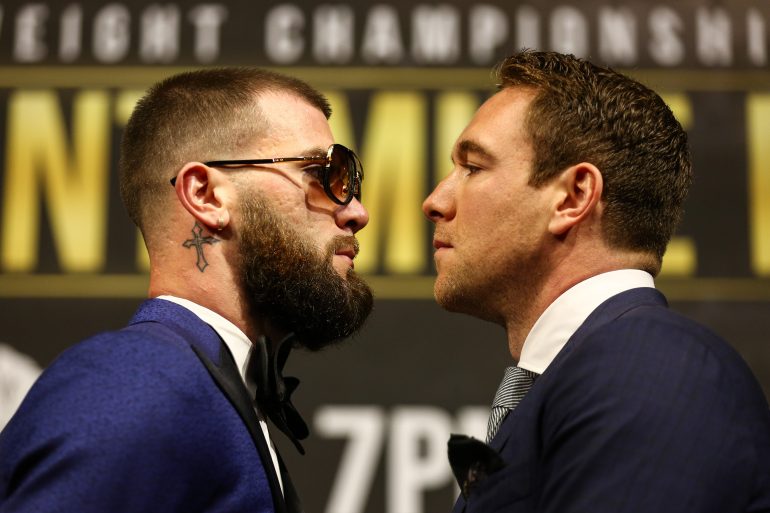 Caleb Plant and Mike Lee face off prior to their July 20 showdown in Las Vegas. Photo by Stephanie Trapp/Trappfotos.
01
Jul
by Joseph Santoliquito

The answer was a quick, succinct “No.”

You can almost see IBF super middleweight champion Caleb “Sweet Hands” Plant seething through the conference call on Monday, after he was asked if Mike Lee really knows what he’s getting into when they meet Saturday, July 20, on the Fox network portion of the Keith Thurman-Manny Pacquiao welterweight championship on Fox pay-per-view from the MGM Grand Arena in Las Vegas.

There was a feeling that Plant (18-0, 10 knockouts) genuinely doesn’t like—nor respect—the 32-year-old challenger from Chicago, Illinois, in his first title defense.

Lee (21-0, 11 KOs) will be fighting for the first time in 13 months. He’ll be dropping down in weight, from light heavyweight to 168 pounds. Added to that, he’ll be facing a world champ who’s fresh off the biggest victory of his career.

So, the question stood out there like a hanging speed bag for Plant to whack, when he was asked, “Does Mike Lee really know what he’s getting into?”

“No,” Plant said, then paused.

“It’s not my job to tell him otherwise, I’m going to let these hands do the talking,” Plant said. “He’s delusional. He’s never faced anybody like me. He’s never even come close. He just told you guys that he’s not even sparring anyone who even looks like me.

“But, no, he has no idea, but that’s okay. He’s going to earn a lesson on July 20. One that can only be taught by me. I don’t know. I don’t like the guy much. I don’t like anybody who’s in the ring with me. I don’t want to be friends. I don’t care what they have going on.

Lee, a University of Notre Dame Mendoza College of Business‎ graduate, feels confident. He stresses that the 13-month layoff won’t affect him.

“I’ve been training and I’ve been busy, I’ve just been waiting for that phone call,” Lee said. “We knew about this fight a long time. It’s not one of those things where I got a call four weeks before, six weeks before.

“I’ve been training. I’ve been busy. We were just waiting for that phone call. We’ve had a long time to prepare for this. There were no managerial issues. If anything, we were waiting, we didn’t get the right fights.”

Though Plant, 26, will be listed as the smaller fighter, he’s actually an inch taller than the 6-foot Lee and both fighters have 74-inch reaches.

Lee, however, has not faced the caliber of opponents Plant has.

“Fans will see fireworks,” Plant guaranteed. “He won’t make it to the final bell. My camp has been sensational. Literally the best camp that I’ve ever had. I’m sure you guys get on the phone with a lot of fighters and they tell you that.

“But this camp I’ve become a new monster. That’s exactly what you guys will see July 20. I’m a little more excited to show the world what I’m capable of. My mentality has not changed. I’m not the hunted, I’m the hunter.

“I’m not a grown man, I’m a growing man. I’m going to continue becoming better in the ring. I think Mike Lee is someone who doesn’t tell the whole truth. I have the inside scoop over a couple of things he’s done. I have the same respect for him as I do everyone else I face in the ring—none. I don’t care about his village. I don’t care who lives there. I’m going to burn it down.