Mike Lee is finally getting his title chance, after another great sales pitch 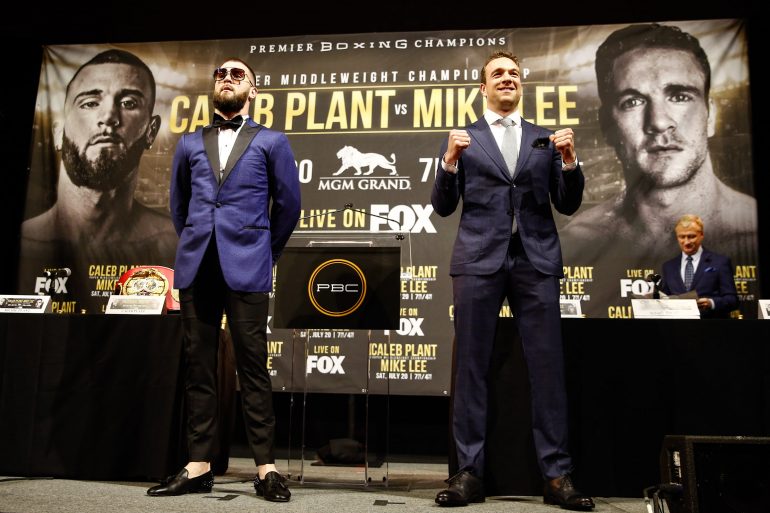 Caleb Plant and Mike Lee pose after their announced fight on July 20. Photo by Stephanie Trapp/Trappfotos.
01
Jul
by Joseph Santoliquito

Mike Lee is polished. There’s no doubt about that. The University of Notre Dame Mendoza College of Business‎ graduate was once a pitchman for Subway sandwiches without ever really accomplishing anything in the ring to get the commercial spot.

In addressing the media on Monday, Lee (21-0, 11 KOs) was in full “pitch mode” again trying to convince the media on a conference call that he has a chance against a world champion, after a 13-month layoff and dropping down from his usual light heavyweight 175 to 168.

Lee is getting a title opportunity—again, without really doing anything to deserve it.

“My team and I have been talking about super middleweight and that if there was an opportunity for a big fight for a while, so for me, it didn’t come from left field,” Lee said. “When I got the phone call for this specific opportunity, I was all about it. I knew 168 wouldn’t be a problem and I knew I could bring my power down to this weight class if I rehydrate the right way.

“When a world title comes you say yes, so especially one I know I can win. I knew 168 was a comfortable weight for me. Here we are.”

Lee mentioned that it only takes one punch to end a fight, and that he likes the position that he’s in. But “The White Bear” dismissed the resume Plant has accrued, like beating Jose Uzcategui to win the vacant IBF title and dominating veteran Rogelio Medina to get there.

“I’m an entirely different fighter (than they are),” Lee said. “That’s the beauty of the sport. It doesn’t matter. I don’t really care what his other opponents have done in or out of the ring. When the bell rings, it’s just me and him.

“What comes out of his mouth doesn’t concern me whatsoever.”

Lee admitted he watches film and has seen Plant fight.

“But you don’t take it to heart, because those guys aren’t me,” Lee said.

When asked if he’s faced anyone similar to Plant in the ring or during sparring, Lee said, “No one specific comes to mind in terms of (Plant) since I’ve been a pro. I’ve been fighting since I was eight years old and been a pro for 21 fights, and in and out of pro camps sparring.

“I’ve sparred and been in the ring with so many different guys, so you see a little bit of everything.”

Lee last fought on June 8, 2018, in Rosemont, Ill., winning a 10-round light heavyweight decision over Jose Hernandez, whose one foray with a credible opponent ended in a one-round knockout to undefeated Ulises Sierra.

Since then, Lee has been inactive, though he says that’s been because he was waiting for the right chance to get back into the ring.

“I’ve been training and I’ve been busy, I’ve just been waiting for that phone call,” Lee said. “We knew about this fight a long time. It’s not one of those things where I got a call four weeks before, six weeks before.

“I’ve been training. I’ve been busy. We were just waiting for that phone call. We’ve had a long time to prepare for this. There were no managerial issues. If anything, we were waiting, we didn’t get the right fights.

“It was a frustrating few months just kind of waiting for that phone call. We got it, so we’re here.”