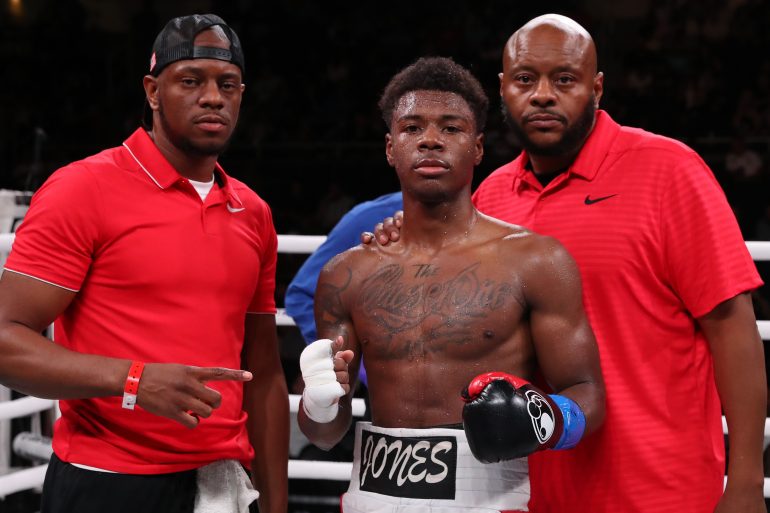 It’s a template that’s been tried, because it is true. Sugar Ray Robinson once fought Jake LaMotta twice within a month in 1943, with their second fight coming one week after Robinson won a 10-round majority decision over California Jackie Wilson. Sugar Ray Leonard used to fight once a month when he was coming up.

Today, rising prospects just aren’t in the ring that often.

The undefeated Jones III (3-0, 1 knockout) laughed at the premise that he sparred on the plane between fights.

That boxing itinerary doesn’t exist in this day and age. 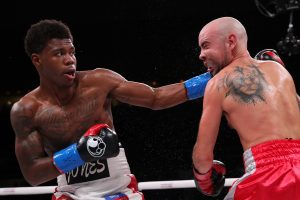 “After my fight in London, I had an interview, and Eddie (Hearn) told me I looked so wonderful and great, he wanted to fight the next weekend, so I said, ‘Of course,’” said Otha III, who’s 19 years old and trained by his father, Otha Jones II and his older brother, Roshawn Jones. “I felt very good from London, then I went to support my teammate in Madison, before I left for Providence.

“It wasn’t as much rest as I wanted, but I felt pretty good. I trained for two days to train and tighten the little screws.”

The teammate Otha III was referring to was amateur star Chris Jones, who was competing and won gold in the junior Olympics.

“I consider myself old school in a lot of ways, because fighters in this time and age want stay in this era right now,” Otha III said. “I want to go back to old school, because it’s making me look greater on my part.”

It’s also honing Otha III to be more not only more physically tough, but mentally tough, too. Back in the day, fighters didn’t have time to recuperate. They plunged forward and made their bodies—and their minds—sharper through repetition against live opponents.

Otha II admitted the travel did take a toll. Otha III wasn’t as precise against Arriagada due to a lack of rest. Otha III’s amateur and extensive wrestling background prepared him for the previous two weeks.

Otha II worked on patterning his son’s development on Sugar Ray Leonard’s early progression. Their goal is simple: To won every round. It’s Otha III will sneak a peek up at the round clock to check the time.

Robinson fought almost every weekend in portions of his career. The Joneses took a page from Ray Leonard in coming on strong in the final 45 seconds of each round to finish convincingly.

“I think these kinds of experiences will make Otha III more ring savvy,” Otha II said. “We believe we gain more from guys with experience than beating bums, because it gets us nowhere.”

Otha III was a three-time Ohio state wrestling champion between the ages of 8 to 12, sometimes wrestling eight times in a day. And Roshawn was an accomplished wrestler before he injured his neck during the senior year of high school.

“A lot of Otha III’s mental toughness comes from wrestling, which I think in a lot of ways is like training for boxing,” Otha II said. “We still train like a wrestler sometimes. Conditioning will never be a problem for Otha III.

“That comes from his wrestling. People think wrestling is so far away from boxing that it has no correlation, but it really does. The concepts are the same, working off of angles and surprise moves. It’s the same thing.”

Hearn told Team Jones to give Otha III a good rest, before preparing for another fight in September, on a Devin Haney undercard in Las Vegas.

“Just another day at the office,” Roshawn said. “We’ve traveled all over the world ever since Otha III was four years old. He won three-straight state champions, and when you’re able to do that, you’re a special breed.

“I hurt my neck my senior year. I fractured my neck and couldn’t wrestle again. That was a wake-up call, and stopped my career to plunge everything into my brother and what he’s been doing the last 11 years.”