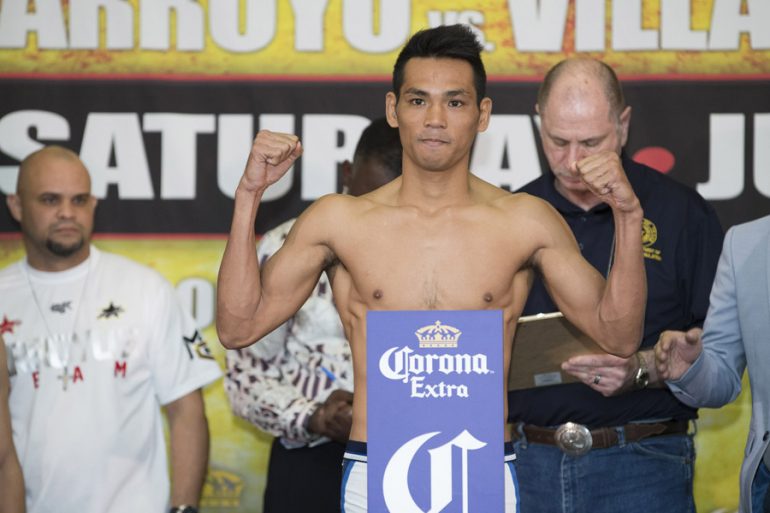 It’s another long trip for Arthur Villanueva. From the Philippines he flew to Hong Kong, then to Dubai, then after another layover, he’ll fly to Moscow before another leg to Astana, Kazakhstan. He’s a little sleepless, tired, but it’s nothing he can’t handle.

In the end, it’ll be worth it, no matter how many connecting flights he has to take back to Cebu City, if he can return with the WBC bantamweight title. Villanueva admits he wasn’t expecting the news when he was informed that he’d face Nordine Oubaali on Saturday, July 6 at the Barys Arena in Kazakhstan.

“He’s good fighter, he has a lot of experience in the amateurs. He’s a world champion and I expect he is a very good fighter,” said Villanueva (32-3-1, 18 knockouts).

He’s had two previous attempts at a world title against McJoe Arroyo and Zolani Tete, but fell short. The last time he faced a championship level fighter, in 2017 against Luis Nery, he was stopped in six rounds. All three are southpaws, but Villanueva has worked hard to learn how to be effective against lefties. He has sparred with three different southpaws at the ALA Gym in Cebu to prepare for this fight.

“I have confidence now, and even [though] I’ve lost to southpaws, I learned a lot in those fights and that’s my advantage,” said Villanueva, who adds that he believes Tete is a better fighter than Oubaali.

Oubaali (15-0, 11 KOs) of Bagnolet, France won the title in January with a unanimous decision over Rau’Shee Warren on the Pacquiao-Broner card in Las Vegas. At 32 he’s two years older than Villanueva, and competed at both the 2008 and 2012 Olympics.

Villanueva grew up in Bago City in the Philippine province of Negros Occidental. Despite hailing from a town known for boxing, he grew up wanting to be a chess master and idolized Garry Kasparov. He placed as high as second in an inter-city tournament but the financial strains of coming from a family of 12 children hit home when his father died. To pay for school expenses, he took up a side job driving a tricycle (a motorcycle with a passenger sidecar) at age 12, earning about $2 a day. He picked up boxing at age 16 and turned pro in 2008 at age 19.

Villanueva had run his record to 27-0 and risen as high as no. 7 in The Ring ratings at 115 pounds before suffering his first loss. His career has been a mixed bag since then, and in his most recent fight, he drew with compatriot Carlo Demecillo, who entered the fight at 11-5, last November.

One of the factors that makes Villanueva’s trainer Edito Villamor confident in his fighter’s chances is that he’s facing a shorter fighter than someone like Tete, who used his height and reach to befuddle Villanueva all night. Villanueva is listed at 5’5”, an inch taller than Oubaali.

“We need to win convincingly on this fight,” said Villamor. “Hope Arthur can deliver.”