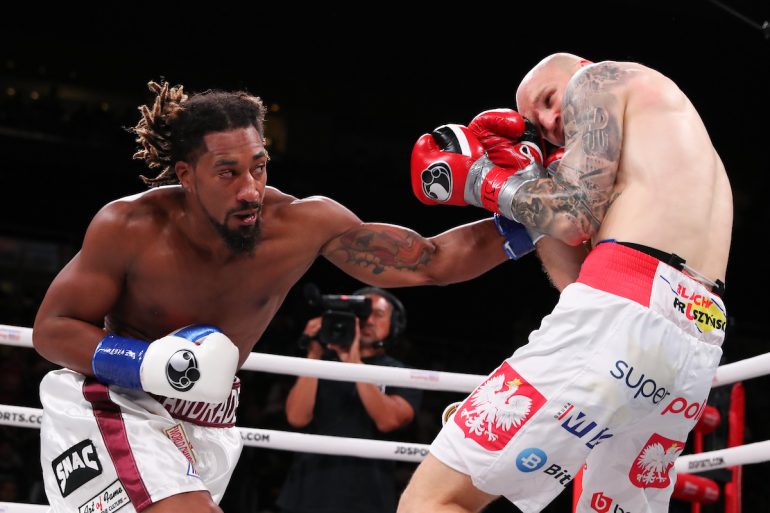 We the people often are not good at accepting life on life’s terms and that very much includes how we look at the sports entertainers who do their thing in that squared circle.

This belief has been solidified in the last 10 years, with the emergence of the double-edged sword that is social media, which helps in building up facades of personas but also gives that platform and amplifier to those who wish for more…for better…for different.

Demetrius Andrade hears it copiously, if he chooses to, from folks on social media, who wish the Rhode Island boxer would fight in a different fashion. And let’s be clear; this isn’t all negativity for negativity’s sake. People are mightily impressed with the skill set of the 31-year-old Andrade, who gloved up Saturday evening in his hometown of Providence, but they wish he’d step on that gas more often.

Skills pay bills and, in this age of platforms building their over-the-top subscription empire, really well. However people crave knockouts and the viral video element of a splashy and flashy KO gets rewarded with an extra couple days of buzz.

At the Dunkin Donuts Center in Rhode Island, in round one, the patrons dug what they saw. Andrade, the super-skilled lefty who holds the WBO middleweight crown, scored a knockdown of his Polish challenger, Maciej Sulecki, who entered a 5-to-1 underdog.

A long and sharp left dropped the Pole and, once again, Andrade was putting a foe on his seat. This was the sixth knockdown he’d scored in his fourth bout at 160. The patrons rose and anticipation (bloodlust) heightened. They’d be quite pleased with a quick rub-out, at seeing their guy put a stamp on the forehead of the challenger, who entered 28-1 (with 11 knockouts). Analyst Sergio Mora noted that we’d been here before, though; early knockdowns then decisions. It would be a “big statement” if that finishing instinct was fully applied.

Alas, it was not to be. “Boo Boo” didn’t back off but he fought smart.

That’s who he is, what he does. He’s a pugilist-specialist and not a mad bomber, not a shark in short pants.

“Don’t make this a war; make it a boxing match,” offered father/trainer Paul Andrade, as the 60 seconds ticked down to start round two. “Instead of going headhunting, I want you to hit this elbow,” Pop stated.

And this is crucial. Do fathers always know best? No but was Dad’s advice sage as hell, if he’s looking at the long-range best for his boy, neurologically speaking? Damn right.

Fight smarter, not harder. Don’t seek to impress the punters; get that W and don’t take excessive risks.

Ah but there you have it, the big issue. It’s hard to have it both ways. With larger risks come bigger rewards. Bigger purses, when you whet those appetites and leave ’em wanting more, have them chattering the day after – the week after. Boo Boo doesn’t so much do that; marvelous skills, but not a viral video dude.

And guess what? Andrade has not and maybe will not have as easy a time as he’d like to score that signature scrap, against the Canelo Alvarezes and Gennadiy Golovkins, as he would if he were more the banger than the pugilist-specialist. There is not typically any huge groundswell from rooters who get amped after seeing the Rhodie score a splashy KO to place him into that super-fight. He leaves ’em wanting more…more instances when he’s explosive and aggressive. Again, I saw it on social media, the critics saying that they weren’t as enthralled as they’d hoped to be.

We saw the stats; Boo Boo is not a volume guy. He didn’t throw 500 punches in the 12 rounds. People like action – they can appreciate the Sweet Science but they groove on constant activity and Boo Boo is a smart watcher, who uses the jab to maintain the distance of his liking. People think he could do MORE and thus his fan base isn’t as large as maybe it could – or should – be. “Trying to stay in the mix with the superstars in the division,” said Brian Kenny, in round 11, as the domination session neared its end.

Three judges scored the bout 120-107 in favor of Andrade, a former two-time junior middleweight titleholder, who successfully defended his WBO title for the second time. Andrade threw 496 total punches, landing 133. Sulecki landed 51 of 331 total punches and the relative silence at the end of the bout spoke loudly. Boo Boo had stayed smart down the line and stayed defensively aware. Don’t be hit and hit back; that was his focus. The fans didn’t boo but they didn’t roar. It is what it is; he is who he is and I think, by now, our best play is this – acceptance.

Post-fight, Andrade spoke to Sports Illustrated’s Chris Mannix, giving Sulecki props and said he was happy to give the fans a 12-round session. “He ain’t no Steve Rolls; he ain’t no Rocky Fielding…Canelo, where are your cajones at? Let’s get it! (The message I wanted to send in round one was that) I’m the best out there,” he said, noting that he wanted to that prove he looked “pretty, tall, black and handsome,” and he delivered. The 28-0 (with 17 KOs) ring tech told Mannix his legs were bothering him some, so that impacted his aggressiveness. “Listen, forget that WBC shit, whatever that ‘franchise belt’ is. Canelo, let’s go, man. If I step up to the plate, I’ll step up to the plate. Unify this division. Let’s have one champion! Let’s do it! That’s it. There’s no more running; there’s no more games. Let’s put it all on the line, see who’s the best, mano a mano, cajones for cajones. Viva Mexico!”

The winner said if he’d have stopped Sulecki, that wouldn’t help him snag the super-fight…Andrade said he wants to fight the upper crust. “Where’s Canelo? Where’s Triple G? Where’s the hold-up?”

Boo Boo is what he is…and yes, eventually he will get that signature fight. There are only a certain number of top-tier talents and so, by process of elimination, a Canelo and/or a “GGG” will face off with Andrade. But the New Englander’s style makes him one of whom to steer clear and that’s a fact; that’s sports capitalism and it is what it is. If I’m Team GGG, I try to figure out nine other options before I send my guy in with that pugilist-specialist. If you are Boo Boo, you keep doing what you’re doing and maybe we all accept that his style won’t change. It isn’t the way of the world right now but it is what it is. He is a pugilist-specialist, a severely skilled one and, at 31, he isn’t changing his ways to be what he’s not.