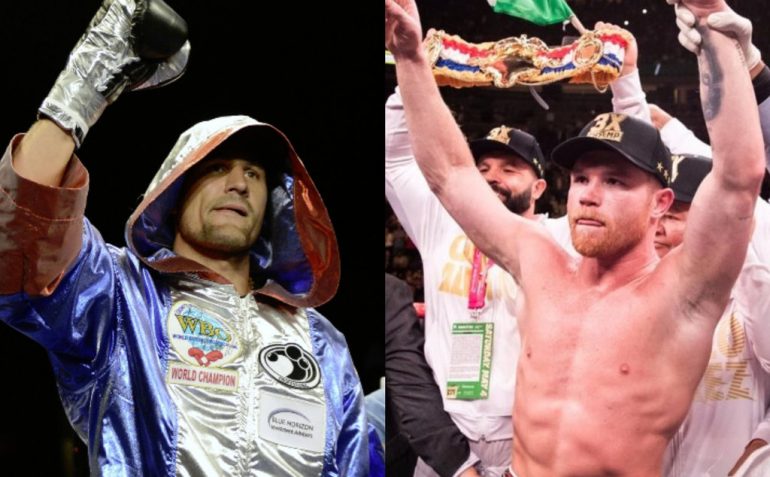 That’s what I wrote to Eric Gomez of Golden Boy Promotions when word dropped that Team Canelo is thinking they’d like to have a go with WBO light heavyweight titleholder Sergey Kovalev.

Gomez didn’t want to get into it, he said he didn’t want to comment now. “When all negotiations are done, more than happy to talk,” he told The Ring.

Kovalev’s trainer Buddy McGirt, who just entered the Hall of Fame, also told us that he didn’t want to speculate and engage in theorizing, not until this thing becomes more grounded in full-on reality.

Now, Chris Mannix of SI and DAZN reported that Canelo is “zeroed in on” a Sept. 14 fight versus the Russian.

So we speculate, while this plays out… or doesn’t.

First things first, that weight gap. To me, it’s significant, and I am surprised at the number of people who don’t see it as a big deal. Kovalev is being dissed and dismissed; pundits and fans opining that he is easy work for Canelo. Now, yes, the calculus in assessing that match could change if a catch weight were sought.

But of course, Team Gennadiy Golovkin would be mightily impacted should Canelo steer into the Kovalev lane, and not enter into that third tango. Tom Leoffler promotes GGG. “Unfortunately I can’t comment yet on the status of the negotiations,” said Loeffler, when I asked about a potential Option B for GGG. I asked him about the addition of Kovalev into the mix, and he demurred, noting that commenting can be counter-productive to getting a fight made.

Kovalev is promoted by Kathy Duva of Main Events. The New Jersey based dealmaker has been working on hashing out what’s next for the 33-3-1 boxer, and Anthony Yarde (ranked No. 1 by the WBO; age 27; 18-0 record with 17 KOs), a Brit, was option A.

Yeah, lots of moving parts. Where does a Kovalev vs. Yarde scrap stand, now? “Queensberry (aka promoter Frank Warren) and the Russian promoter RCC both tell me they have come to terms. I’m waiting to hear that their contract is signed. Hopefully, by next week,” Duva shared.

I asked her about a Kovalev vs. Canelo match; has GBP reached out officially to talk about making that clash?

“They have only asked if Sergey would be interested,” Duva said. “Nothing further than that. No negotiations. No offer. I have heard that Canelo, himself, has asked for the fight. It’s about his legacy. I have been told that he wants the challenge of reaching for the title in an historic fourth weight class. In which case, he truly is a magnificent badass. You’ve got to love the guy for that! And, of course, Sergey finds the fight very appealing too!”