Maciej Sulecki: ‘Demetrius Andrade is good but not excellent’ 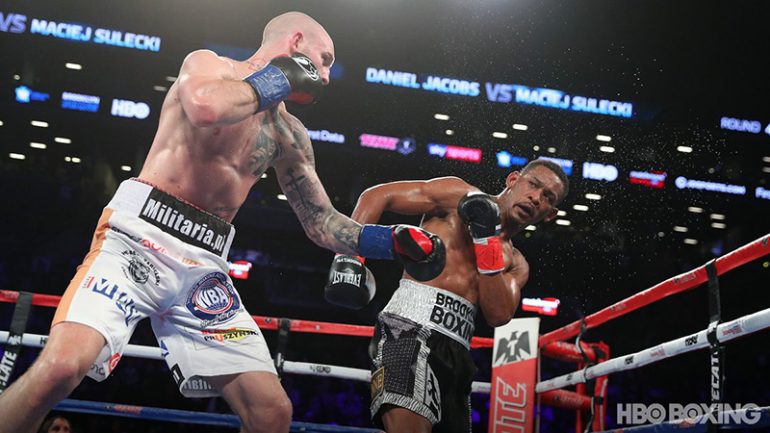 Poland’s Maciej Sulecki will challenge Demetrius Andrade for the WBO middleweight title at the Dunkin Donuts Center in Providence, Rhode Island on Saturday.

Sulecki, who is ranked No. 8 by The Ring at 160 pounds, believes he has earned his world title opportunity.

“I am here where I wanted to be and should be,” Sulecki (28-1, 11 knockouts) told The Ring through through Jacek Szelagowski of Knockout Promotions. “It is fully deserved.

“(Andrade) is a good boxer; very unconventional, a southpaw with long arms and good speed. He is good but not excellent. It was my dream, it was my goal and I am not going to waste it.”

Andrade was a top amateur; winning gold at the 2007 World Championships and competing at the 2008 Olympics. He turned professional shortly thereafter and captured the WBO junior middleweight title in 2013 and made one successful defense. In October, Andrade (27-0, 17 KOs) won the vacant middleweight belt with a 12-round unanimous decision over Walter Kautondokwa.

Back in March, Sulecki edged Gabe Rosado in what was a defacto title eliminator. The once-beaten 30-year-old survived some rocky moments late in the fight to prevail.

“The fight was easy for me until Round 8,” Sulecki said. “Everything went according to the plan, but suddenly I felt a big pain in my hand and I thought it was broken. I lost my concentration and got knocked down the first time, but it was not hard for me. The second knockdown was hard, but it was after the punch to the back of my head.”

Prior to this bout, the gutsy Pole had given former IBF middleweight titleholder Daniel Jacobs a stern examination in April 2018. Despite a points loss, there was plenty of positives to take from the experience.

“It was a great lesson,” Sulecki explained. “I realized that I am a top-class boxer. That fight gave a lot of confidence. I know I can fight with everyone from the top.”

To ready himself for Andrade, Sulecki spent five weeks in New Jersey. He also commuted to Brooklyn to spar with his coach Piotr Wilzcewski, who once held the European super middleweight title.

Sulecki’s manager and promoter, Andrew Wasilewski, is upbeat about the challenge ahead.

“Great fight, great athletes with great skills,” said Wasilewski. “[The] world title is at stake, this is what we love the most about boxing.”

This bout and undercard will be broadcast live on DAZN in the U.S. and Sky Sports in the U.K.