Demetrius Andrade on the verge of making Canelo, GGG fights unavoidable — and he loves it 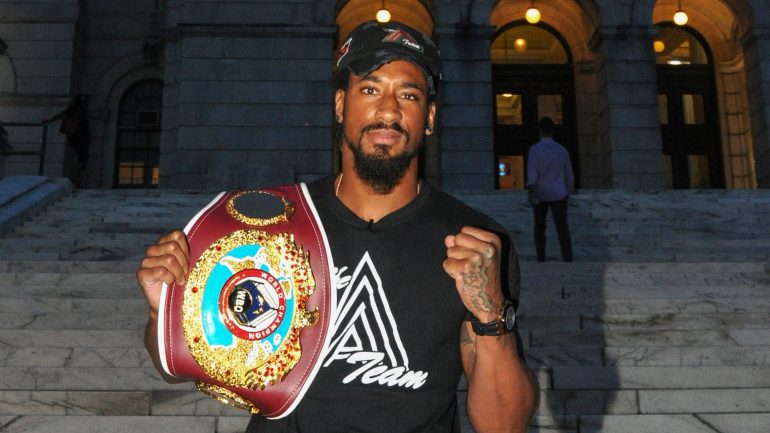 PROVIDENCE, R.I. — Demetrius Andrade delivered a flurry of punches right on cue, with James Brown’s triumphant bellowing of “woooo-oooo-oooo” toward the tail end of “The Payback.” He then tacked on a few more shots in concert with the “Godfather of Soul,” exclaiming each word, “Lord! Those hits! Carry on! Carry on!”

That moment during his public outdoor workout Wednesday at The Providence Rink in his hometown offered a sliver of what makes the reigning WBO middleweight champion such a likable guy. His crisp, precise boxing skills — which he timed on this scorching summer afternoon to coincide with Brown’s lyrics — and charisma simply can’t be taught or manufactured.

MORE: The timeline that led to Andy Ruiz’s upset of Anthony Joshua

Andrade, 31, has always had the pure sweet science skills, colorful personality and lip service. “Boo Boo” will remind anyone on any occasion that he is “tall, black and handsome,” even flipping his catchphrase in Spanish.

But Andrade possesses commodities now that he didn’t have a few years back, when issues with his then-promoters triggered painful periods of inactivity — having only fought three times from 2014-16 — thus suffocating his star potential.

For starters, he is active again, with his fight against Maciej Sulecki at the Dunkin Donuts Center in Providence on Saturday night marking his third bout in eight months since signing with Matchroom Boxing and promoter Eddie Hearn last summer.

There’s something else, too.

That maroon, gold and teal hardware draped over his shoulder represents the missing link coveted by unified world middleweight champion Saul “Canelo” Alvarez, who wants to further cement his fighting legacy. It’s also what Oscar De La Hoya is demanding Gennadiy Golovkin grabs first in order to secure a trilogy fight with Alvarez — whether it be contentious posturing from Golden Boy Promotions or not.

For the first time, Andrade has something that definitely Canelo and perhaps GGG needs. If he keeps the WBO strap and does it with a statement win Saturday night, Andrade could make a clash with either fighter unavoidable.

That’s why this is Andrade’s own composition of “The Payback,” Boo Boo’s unique take on Brown’s 1973 album and title track of the same name.

“‘Ohh, it’s Demetrius Andrade,'” he told Sporting News, ducking and dodging out of the camera’s frame and offering his impression of what Alvarez and Golovkin have been doing to him. “I’m just going to keep doing what I’m doing, because at the end of the day, your job (pointing to SN’s Mark Lelinwalla and referring to the media at large) is to make sure that you say to them and everybody else, ‘Why hasn’t nobody mentioned Demetrius Andrade?’

“And if we keep going and keep doing that, the fans, the public, people are going to know that Demetrius Andrade is out there, he’s real and he wants to fight. And that’s what the fight game is all about — the best fighting the best, not who’s more popular and putting them all together and you get GGG-Canelo 3. Nobody wants to see that. Who wants to see that s—? That’s wack!”

“Nobody wants to see that s—!”@BooBooAndrade‘s thoughts on Canelo and GGG being dismissive about a fight against him and the Canelo-GGG trilogy. pic.twitter.com/gNyLmqJk1h

Join DAZN to watch Andrade vs. Sulecki on June 29

Many boxing fans and pundits will disagree with that last statement. But by evoking the feeling that Golovkin should have won their first meeting and possibly the rematch — and thus would love to see the trilogy this September — the essence of what Andrade is saying is that he is undefeated, highly skilled and has middleweight gold. So he deserves a prize fight with either boxing star in what would be the biggest payday of his career.​

Andrade understands the business of boxing and the magnitude of Canelo-GGG 3, but he is also steadily injecting his name into the fray to the point where something must give.

“It’s that time when the elite fights the elite,” he said. “That window is closing down. Now, we have to kind of fight each other.

“Golden Boy did a great job moving Canelo; Tom Loeffler did a great job moving GGG. I didn’t have the best promotional machine back then. Now I do, and with DAZN, Eddie Hearn, they got fights every week, they’re promoting the hell out of people and myself, and so now the people and the public, they’re actually seeing what else is out there and they want to see these things happen now.”

Things happening “now” in boxing is a predicament that often leaves fans chewing the wood off their tables in frustration. But “soon” seems to be doable.

“We knew if we wait long enough, sooner or later, it’s going to have to happen,” said Paul Andrade, Demetrius’ father and trainer.

“Wait long enough” while winning, that is.​

In October, Andrade took the then-vacant WBO strap with a unanimous decision over Walter Kautondokwa before defending the title via a 12th-round TKO of Artur Akavov in January. Along the way, his confidence has been snowballing, his fight game growing sharper.

Andrade is rather unabashed speaking about his hit-and-not-get-hit style and philosophy that he feels is the only way to go about the sport.

“I want to stay like this,” he said, using his hand to circle his handsome features. “I don’t want to look like the other guys mumbling and s—. At the end of the day, you have your family, you have real die-hard fans and you got people who just want to see two people kill each other and don’t give a f— about you, if you end up in the hospital or not.

“So, why am I going to sit there, entertain them people? My job is to make sure I get out there as safe as possible and good luck to the other guy because I’m coming to hurt you.”

While Andrade (27-0, 17 KOs) is tasked with doing away with a top 10 middleweight fixture in the rugged Polish fighter Sulecki (28-1, 11 KOs), the Providence boxer is quick to shake his head in disgust over Golovkin’s fourth-round KO of relatively unknown Canadian boxer Steve Rolls on June 8.

Andrade has a similar problem with Alvarez’s destruction of super middleweight Rocky Fielding in December, although the face of boxing did score a unanimous decision over his friend Daniel Jacobs in May. Still, “Boo Boo” has an issue with that fight, as well.

Join DAZN to watch 100-plus fight nights a year

Andrade is so hell-bent on landing a shot with Canelo that he says he’d take it on eight weeks notice if successful against Sulecki — and if Golden Boy does indeed spurn GGG out of the September trilogy.

“I’m not turning down the opportunity to walk out the ring with four belts,” Andrade said bluntly about getting the chance to take Canelo’s IBF, WBA and WBC middleweight titles for an undisputed reign.

It’s math he loves, but the equation must be built with a Sulecki win and confirmed opportunity from boxing’s cash cow.

“I’m gonna keep doing me, and that’s winning and putting on what I need to do to get in the ring with the likes of Canelo and GGG, hopefully next,” Andrade said. “We don’t control Canelo or Golden Boy. Hopefully we get that next if Canelo is really man enough to step into the ring with Demetrius Andrade.”

And if that happens, Andrade will have a chance to play “The Payback” for the boxing world to hear loud and clear — “Boo Boo” style.