Jermell Charlo gets back to winning after stopping Jorge Cota 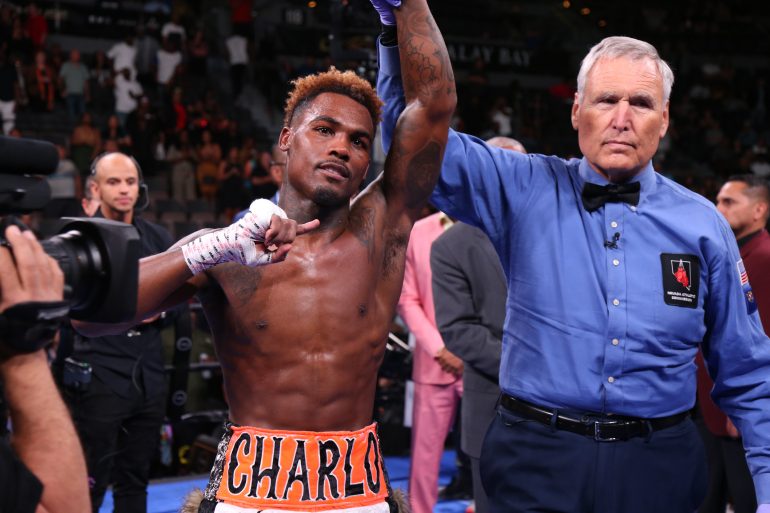 It didn’t matter who replaced Tony Harrison, Jermell Charlo would only see Harrison in front of him. It was Harrison who six months ago handed Charlo his only pro loss and took away the WBC super welterweight belt.

It was Harrison that Charlo was hoping to see again Sunday night in the rematch at the Mandalay Bay Events Center in Las Vegas.

When Harrison tore ligaments in his ankle three weeks ago, which forced him to pull out of the rematch, Charlo was stuck with replacement Jorge Cota.

Cota never had a chance even before the opening bell.

Charlo (32-1, 16 knockouts) destroyed the Mexican veteran at 2:14 of the third round in the scheduled 12-round super welterweight main event on the PBC on FOX.

Cota came out southpaw in the first round, and that seemed to cause Charlo to think a little. It didn’t take long for Charlo to adjust.

With 2:31 left in the third, Charlo nailed Cota (28-4, 25 KOs) with a right in the chest, sending him down on his butt. As soon as Cota got up, Charlo crushed him with a right to the chin. Cota went crumbling down to the canvas, his eyes rolled back into his head. Referee Jay Nady didn’t even bother counting.

“I want to thank all of you who came out and for supporting Lions Only,” Charlo said. “If it wasn’t for you fans we wouldn’t be there. I’d like to thank you Cota, he stepped in the ring. The guy (Harrison) who proclaims he has the title didn’t show up.

“I got that knock out right in front of my family. He was just getting started and I landed the clean shot.

“I’m trying to be great. I plan on getting the rematch next and then getting all of the belts by the end of the year. Tony Harrison is in the building, He’s lucky he didn’t accept this fight with me. I’m a much better fighter.”

In one of the co-features, sharp-looking prospect Joey Spencer (8-0, 6 KOs) remained unbeaten by winning a six-round unanimous decision over Akeem Black (5-3, 2 KOs). Black had a good fourth round and backed up Spencer. Black had bloodied Spencer’s nose, but a Spencer right in the last 10 seconds seemed to get Spencer back in sync.

Spencer began pouring on the pressure in the fifth, landing body shots that stunned Black. In the sixth, Spencer went back to the body attack and closed strong.

“It was a war. I think it will make me a better fighter,” said Spencer, who went six rounds for the second-straight time. “I learned from this. I learned to not load up my punches so much. Use some more feints and work behind the jabs a little more.

Rigondeaux stopped Julio Ceja (32-4, 28 KOs) with a short left to the jaw at 2:59 of the eighth round in a scheduled 12-round super bantamweight bout.

Rigondeaux cleaved Ceja’s defense with uppercuts, and left uppercut caught Ceja on the nose in the fifth, causing his nose to bleed. Just moments before the stoppage, referee Russell Mora had taken away a point from both fighters for low blows with :56 left in the eighth. 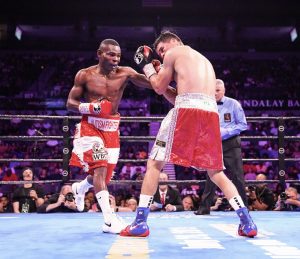 When the fight resumed, Rigondeaux nailed Ceja with a looping left that the Mexican did not see with :41 left in the round. A left uppercut, which Rigondeaux had been landing all night, set up the short left to Ceja’s jaw, sending Ceja down.

Mora waved it over when he saw Ceja’s reaction after he got to his feet.

“People were saying that I get on the bicycle and run a lot,” Rigondeaux said. “Well that’s not true so I wanted to show them I could fight in short distance and I wanted to get a couple of rounds in. Then that left hand came and ended the fight.

“I gave this 100 percent. I want to thank my opponent and especially want to thank my trainer Ronnie Shields. We worked extremely hard for this and we got the victory. I knew I was going to catch him with the left, but it wasn’t there in the beginning. I knew in the later rounds that I could use it and actually catch him. We practiced that every day and it paid off.”

On the undercard, welterweight Jesús Alejandro Ramos went the distance for the first time, winning a four-round unanimous decision over Kevin Shacks (3-4-3, 3 KOs). Ramos, who just turned 18 in March, won by identical scores of 40-36 on the scorecards. Ramos (10-0, 9 KOs) never went more than two rounds in his previous nine fights.

“It was a tough fight,” Ramos said. “I think if I had fought six rounds I could have gotten to work more. I am happy with the decision. It felt good. I have a big future ahead of me. I have a lot to live up to, but I am ready for whatever comes my way. I am happy about tonight and I can’t wait for the next time I get into the ring.”

“This is a dream come true,” Colbert said. “This is a lifestyle for me. I am shooting for the stars at this point. I am the Deion Sanders of the boxing game. That is why my new ring name is ‘Prime Time.’ He was never scared to throw his way. These young fighters are scared to fight me. I am not the biggest puncher, but I am the baddest man in this weight class.