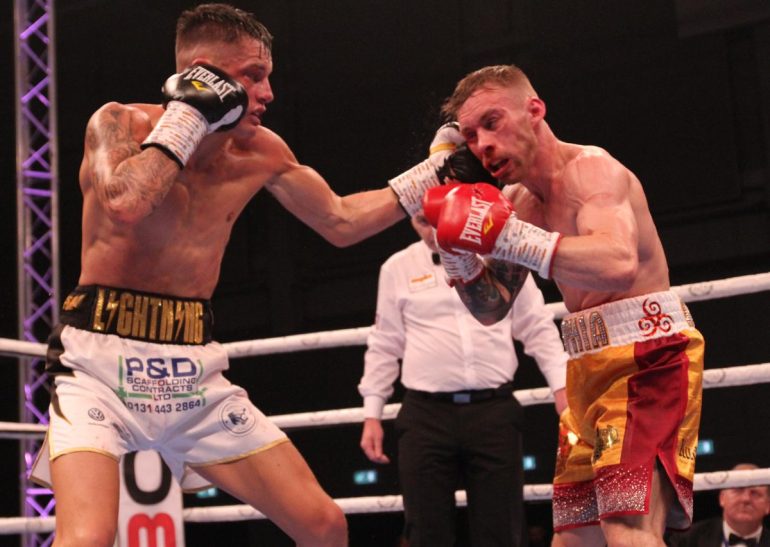 Lee McGregor successfully retained his Commonwealth title for the first time stopping Scott Allan in the eighth round at the Emirates Arena, Glasgow Saturday.

Both men had exchanged barbs in the lead build up and went at each other from the opening bell. At the end of the round McGregor was marked up around both eyes. As the fight progressed, McGregor’s skills allowed him to edge ahead.

Allan was cut in the fourth round, the gutsy challenger had to withstand a big round from McGregor in the fifth but to his credit bounced back to enjoy a good sixth. It proved to be a final hurrah as McGregor got through with a flurry in the eighth round which culminated with a bodyshot that dropped Allan.

Smith boxed well and took an early lead. The two fighters clashed heads leaving both cut in the fourth round. Smith was deducted a point in round five for another clash of heads. Smith pressed the action looking for a knockout victory but was unable to stop his gutsy opponent.

Junior welterweight Lewis Benson won an eight round decision over Renald Garrido. Benson banked early rounds but gassed in the last two and had to fight through a cut left eye in the seventh. Benson (12-2, 2KOs) ran out a 77-75 winner. Garrido is now (24-24-3, 6 KOs).

Junior welterweight Craig McIntyre scored an impressive third round stoppage over usually durable Chris Adaway. McIntyre (11-0-1, 4 KOs) dropped Adaway (9-54-4, 1 KO) in the third round and swarmed over his opponent to get the stoppage at 2:58.

Featherweight Craig Morgan (5-0, 0 KOs) dropped grizzled veteran Elvis Guillen in the opening round and looked like he may get the early victory but had to go the four round course. Perennial loser Guillen (9-54-4, 6 KOs) old-manned his way through proceedings dropping a 40-35 decision.

McFadden, 24, was cut on the hairline from a clash of heads in the opening minute of the fight. The young Scot was also cut this time above the left eye, that bleed intermittently through out the fight thought his corner were able to prevent it getting worse. McFadden was made to work but was to skilled and won a 60-54 decision on the referee’s sole scorecard.