Andrew Cancio repeats with another KO of Alberto Machado, this time in round 3 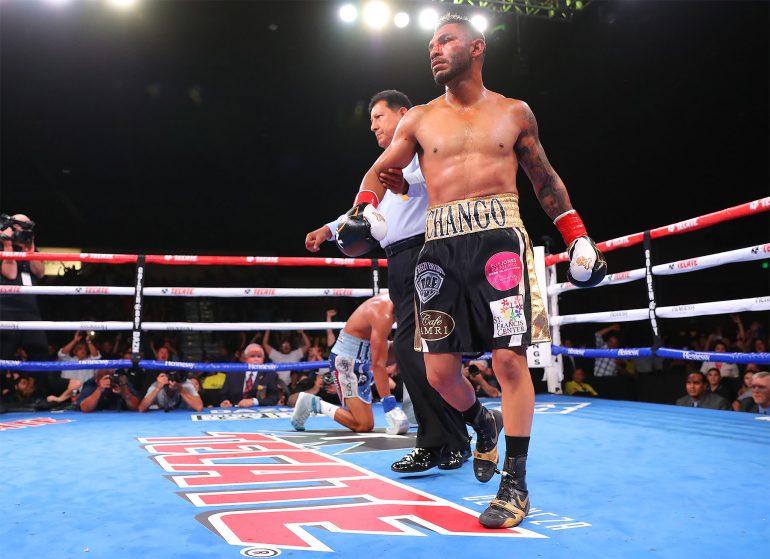 INDIO, California – Andrew Cancio proved his knockout win over Alberto Machado in February was no fluke on Friday night.

Cancio weathered an early barrage and dealt with a cut from an accidental clash of heads to knock out Machado out in round three. With the win, Cancio defended his secondary world title belt and improves to 21-4-2, 16 knockouts.

The win came four months after Cancio’s shocking upset win, a fight which saw him get off the canvas in the opening round to drop Machado three times en route to the knockout victory in round four.

There were naysayers who believed Cancio’s win was a fluke due to Machado having difficulty making weight and personal problems leading into the first fight. Cancio, whose popularity skyrocketed after his win, coupled with working full-time for the Southern California Gas Company, was motivated to prove he could beat Machado more decisively.

“I wanted to knock him out more clearly this time around,” said Cancio after the fight.

Cancio, who grew up in nearby Blythe and now trains in Ventura, California, had to withstand the early barrage from the taller Machado. Both fighters had their moments during the opening round, as Cancio was committed to the body and Machado attempted to land straight rights and lefts.

“(Machado) came out a lot stronger this time around,” said Cancio. “He was a lot faster and stronger than in the first fight. I was very timid in the first fight, trying to fight his fight. He caught me with a few straight left hands, but I wasn’t scared. I was ready. I was too anxious, but I knew I was hurting him with those body shots.”

Both fighters stood in the pocket in the second round, exchanging combinations that brought cheers from the sold-out crowd of almost 3,000 inside the Events Center at the Fantasy Springs Resort Casino.

Cancio had to deal with a cut on his forehead above his left eye, but remained composed as he remained in the pocket with Machado.

It was that composure and remaining compact that kept Cancio within punching range going into the third round. A lead left hook to the body dropped Machado to one knee where referee Raul Caiz, Sr. counted him out at 1:01.

In the first fight, Raul Caiz, Jr. stopped the fight in round four.

“I wanted to knock him out to the head, but he has a good chin,” said Cancio after the fight. “I knew he was going to stay down if I landed that one punch to the body.”

Cancio admitted he had nerves, but was able to get over that during the first fight. He was more relaxed going into the rematch, despite the fame and new-found celebrity Cancio has attracted in recent weeks.

“I remained composed. I showed again that I’m a hard-hitter. His elbow was up and I landed that shot. I thought he was going to get up, but he’s a true champion. He came to get his belt back.”

“(Cancio) showed he’s a great champion,” said Machado, who has indicated he may move up in weight. “I had an excellent training camp. I have to sit down with my team and see if a move up to 135 pounds is what is best for me.”

As for Cancio, there were preliminary plans for Cancio to return to the ring on the undercard of Canelo Alvarez’s next fight on Sept. 14. That will depend if he is able to heal from the cut on his forehead.

Cancio’s next opponent will likely be the WBA mandatory challenger Rene Alvarez of Nicaragua.

“Rene Alvarado has been waiting for a long time,” said Cancio. “I have no problem fighting him.”

Cancio and Alvarado squared off in a back-and-forth affair in December of 2015, with Cancio winning by knockout in round eight.

Asked if he would return to work Monday for the Southern California Gas Company, Cancio quickly nodded yes.