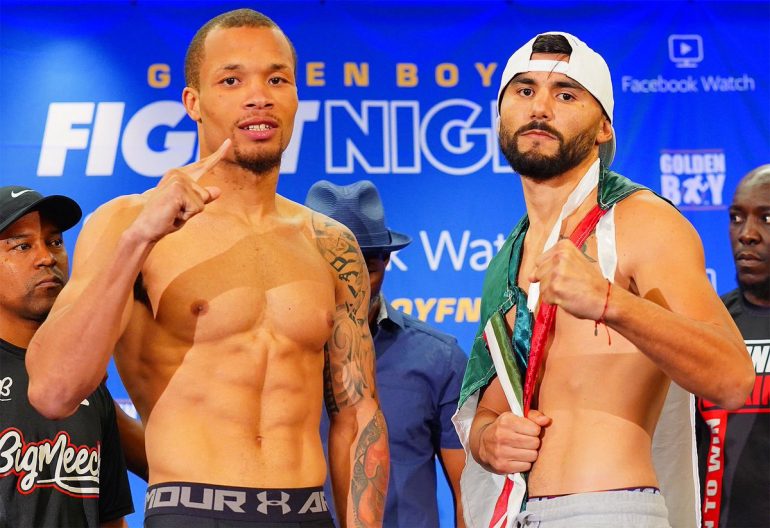 ATLANTIC CITY – D’Mitrius Ballard was looking to keep his run of victories going, while Elias Espadas was hoping to continue building off the victory of his last fight.

Both middleweights had a little something to gain in the 10-round main event of Golden Boy’s Fight Night from the Ocean Casino Resort in Atlantic City, which will be honoring Bernard Hopkins this weekend as a member of their third Atlantic City Boxing Hall of Fame class.

Neither Ballard nor Espadas gained anything.

The fight was stopped in the third round, deemed a no-decision when referee Benjy Esteves Jr. summoned the ringside doctor to look at Espadas’ severely bloody left eye. It was determined Espadas could not continue.

The cut, which was on the corner of Espadas’ left eye, was caused by an accident headbutt in the first round.

“My opponent, I thought he could have kept going,” Ballard said. “It’s the referee’s decision, so it is what it is. But most definitely, let’s do this again.”

Espadas said he thought he could have continued.

“I’ll take the challenge in fighting again. Of course, we can do it again.”

The first round was measured, neither fighter willing to risk anything. Near the end of the round was when Ballard (20-0, 13 knockouts) and Espadas clashed heads, causing a pretty serious cut to open on the corner of Espadas’ left eyebrow.

Esteves immediately called time to have the ringside doctor take a look.

In the second, both fighters opened up. Ballard was patient and Espadas (18-4, 13 KOs) tried to shoot right-hand power shots. Ballard displayed a nice jab in the second, but Espadas came on strong late in the round, trapping Ballard against the ropes and landing a straight right to the face to make it interesting.

By the third, Espadas’ cut was causing problems again. Sensing the fight could be stopped, Espadas put on amazing display earlier in the round, even rocking Ballard a few times. As the middle of the round approached, Espadas may have punched himself out.

He had little left and Ballard began tagging him, causing the cut to open even more. Espadas’ white trunks wore an earie red hue.

In the last minute of the third, Esteves saw enough and called the ringside doctor again.

This time, it was waved over.

But it’s a fight worth seeing again.

The co-feature had a pair of welterweights looking to extend their win streaks to three-straight. It was Eddie Gomez (23-3, 13 KOs) that stretched his streak, and Saul Corral (30-14, 20 KOs) that saw his painfully end.

Corral (30-14, 20 KOs) was knocked down four times in the second round and didn’t really have a chance. Gomez was strong, accurate and moving on thanks to a second-round TKO at 1:55 in a scheduled 10-rounder.

Afterward, Gomez was very emotional, paying tribute to his father, who passed away six days before his last fight, an eight-round decision over Shoki Sakai in October, 2018.

“Great fight, great team,” Gomez said. “I worked hard and it showed tonight. My opponent was a tough fighter, and we knew he was tough coming in. I just knew I had to do my job.”

“I boxed well,” Pham said. “He was a tough guy and kept coming forward; I just had to use the angles and move around, just like my trainer told me to do. I followed the game plan and came out victorious, so I’m happy.”

“It was a good fight,” Murray said. “I was thinking too much in there, that’s why I hesitated a lot, but all around I had him a couple of times. It’s a learning experience, this is why we are here. I’m glad for my win, my team, my advisor, my manager. Thank you, Golden Boy, for this opportunity.”

“I started strong and I thought I got him on the first round,” Rincon said. “I was a little anxious to finish, but it was a great fight. I learn with each fight and I’m ready for the next one.”

Super middleweight Franchon Crews-Dezurn (5-1, 2 KOs) remained undefeated by stopping the tough Kayla Williams (0-3-1) at 1:40 of the fifth round in a scheduled eight-rounder.

“Thank you so much Golden Boy for letting me fight on this show,” Crews-Dezurn said. “I hope the fans enjoyed it. Every time I come, I’m going to bring action, and I’m just going to fight because I’m fighting for my dreams. My opponent definitely brought it to the ring and she is a tough cookie; I appreciate her for taking the fight.”