Andrew Cancio on Alberto Machado rematch: ‘I still have a lot to prove’ 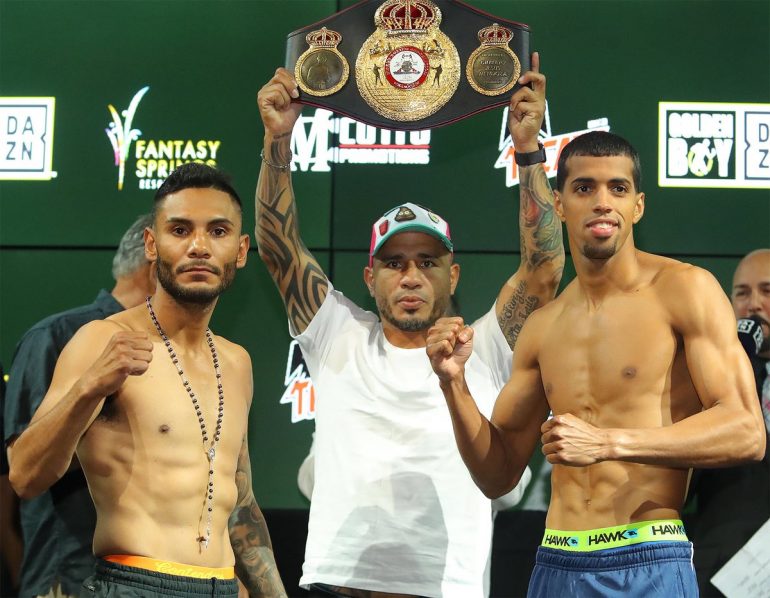 Andrew Cancio’s path from semi-retirement two years ago to becoming one of the best junior lightweights in boxing today was long and arduous.

As bumpy as that path may have been, Cancio would not trade it for anything. In fact, he relishes being the underdog, including having the mindset of proving naysayers wrong.

Cancio will have that opportunity again as he defends his secondary world title belt Friday night against Alberto Machado at the Fantasy Springs Resort Casino in Indio, California. The 12-round bout will stream live on DAZN (9 p.m. ET/ 6 p.m. PT).

In their first fight on Feb. 9, which also took place in Indio, the 30-year-old Cancio overcame a knockdown in the opening round to drop the heavily-favored Machado three times en route to a fourth round knockout victory.

The victory culminated a path that began when Cancio stepping away from boxing after getting knocked out by Joseph ‘JoJo’ Diaz in September of 2016. Cancio decided to give boxing one more opportunity, but had to make changes, including moving away from his hometown of Blythe, California to the boxing hotbed of Oxnard/ Ventura.

The 30-year-old Cancio now resides in Oxnard and is trained by Joseph ‘Hoss’ Janik at Knuckleheadz Gym in neighboring Ventura.

Cancio (20-4-2, 15 knockouts) believes the 19 months away from the ring best served him to get the hunger back.

“I really needed that break,” Cancio told RingTV earlier this week. “That made me who I am today. The time off made me move forward. It made me stronger, especially  in dealing with the struggles where I was at in my life.”

Despite the support he has received from family and friends, along with the new fans he has made in producing one of the top upsets of 2019, Cancio has also heard detractors and naysayers regarding his win over Machado. There are those who believe Cancio’s victory was a fluke due to Machado having to deal with weight and personal issues before the fight.

While he is the slight favorite going into the rematch against Machado, Cancio’s mindset is being the underdog. In his opinion, if is not broke, why fix it?

“I know there’s still people who doubt me or think what I did in the first fight was luck,” said Cancio, who is promoted by Golden Boy Promotions. “I’ve heard the excuses that he had personal things in his life before the fight and that he had weight issues. I’m very hungry and I got the taste of what it is like to have a world title. I’m very motivated because I know there are bigger fights for me if I beat Machado.”

Machado will have a significant height and reach advantage, but Cancio does not believe that will play a factor. Instead, Cancio believes the first fight gave him a blueprint as to how to defeat Machado more convincingly.

“I had added more pressure to myself leading up to the (first) fight. That didn’t work to my favor until when I got dropped in the first round. I wasn’t implementing the game-plan, but by round three, I went straight at him and followed through on what we planned on. With the second fight, I feel more relaxed. There aren’t any nerves. I feel quicker going in to (the rematch) than in the first fight.”

Cancio has given boxing a feel-good story thus far, but he does not want his title reign to be one and done. He also hopes to challenge the other world titleholders at 130 pounds.

Cancio may have more confidence in his ability, but he also is not going to tinker or change the things that got him to the point where he is today.

“I still have a lot to prove. It’s great to have fame and recognition, but I don’t want to brag or be cocky. I want to remain the same person as before winning the world title. I have my two kids that motivate me and to not be arrogant. I just want to remain humble.”