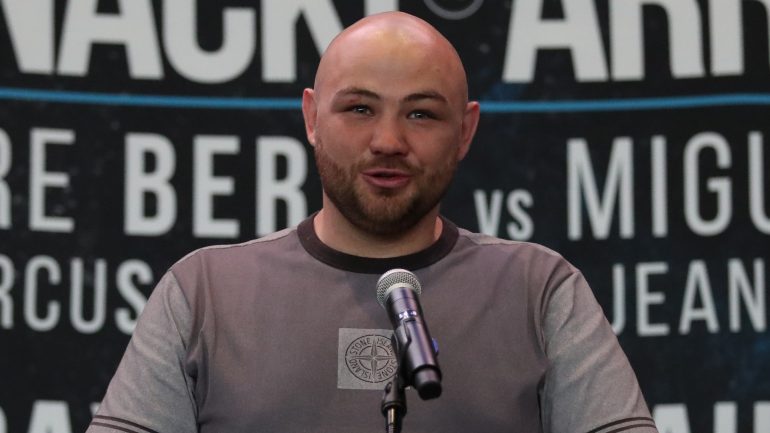 BROOKLYN — Adam Kownacki’s immediate reaction to Andy Ruiz Jr.’s stunning upset of Anthony Joshua was a lot different than the reaction most boxers had.

“‘Yes, the daddy body is going to be the look for the 2019 summer,'” the heavyweight contender said, laughing at the podium of the Barclays Center on Tuesday when asked about it during a press conference to announce his own fight with Chris Arreola at the same venue Aug. 3.

Join DAZN and watch Andrade vs. Sulecki on June 29

“Us chubby guys can fight too,” Kownacki told Sporting News following the press conference. “It’s boxing. It’s not a bodybuilding contest. You don’t have to have a perfect body or look like a bodybuilder to be a great fighter.”

Taking a look at the respective ring resumes of Ruiz and Kownacki will tell you part of that. Watching Ruiz’s quick hands and Kownacki’s heavy hands tell you the rest.

With “The Destroyer” having conquered Joshua to become the first Mexican world heavyweight champion in boxing history, “Babyface” would like nothing more than a shot at WBC titleholder Deontay Wilder. And he’s going about securing the first world title shot of his career in a rather interesting, shrewd manner.

“This is the third fighter I’ve had in common with Deontay Wilder,” Kownacki pointed out during the press conference, referring to Arreola, who Wilder defeated by eighth-round TKO back in July 2016. “I knocked out Artur Szpilka and Gerald Washington faster than he did, and I’m looking to do the same August 3.”

To that, “The Bronze Bomber” could always claim that he softened up those opponents to pave the way for the hard-hitting Kownacki to finish them off earlier than he did. Yet Kownacki did indeed defeat Washington by second-round TKO in January, compared to Wilder’s fifth-round TKO of the same opponent in February 2017. Kownacki’s fourth-round TKO of Szpilka in July 2017 was also five rounds less than it took Wilder to stop the same opponent in January 2016.

Putting stock into common opponent comparisons could be telling or pointless, depending on how you look at it, but Kownacki believes there’s something there.

A convincing win Aug. 3 against Arreola, and the Polish-born, Brooklyn-bred slugger feels confident that he’ll inch up the pecking order of heavyweights throwing rocks at Wilder’s WBC throne.

“Hopefully, it will be sooner than later. He’s going to fight Luis Ortiz next, then maybe Tyson Fury in the rematch. I just have to wait my turn. I just have to make sure I’m ready for Deontay … or Andy Ruiz. Hopefully he beats Joshua in the rematch and then, we could do it. I think it would be an exciting fight.”

To even get to that point, the 30-year-old Kownacki will have to make sure he gets past Arreola (38-5-1-2 No Contests, 33 KOs). The 38-year-old is a former three-time world title challenger, having come up empty in each attempt against Wilder (July 2016), Bermane Stiverne (May 2014) and Vitali Klitschko (September 2009).

As a method of hyping himself up for the fight, Arreola is putting his own career on the line Aug. 3, vowing to retire if unsuccessful against Kownacki.

“I’m saying it now — if I lose, I’m retiring,” Arreola said from the dais. “But I’m not going to lose. I’m coming guns blazing to get this win.”

To that, Kownacki told SN with a smile, “He’s game. He always comes to fight. I’m definitely going to work hard to make sure he retires.”

Just the fact that Kownacki is headlining his first event at Barclays Center on “FOX PBC Fight Night” shows how far “Babyface” has come.

“When I first fought at Barclays Center, I fought after the main event,” he mentioned during the conference, “so this is just an amazing feeling to be headlining.”

While Kownacki hones in on his first world title shot, there’s another life-changing first that’s even sooner. He’s set to become a dad for the first time, with his son due late August.

Big things coming in the near future. But NONE measure up to us becoming parents. ❤️❤️❤️

“I’m excited. I can’t wait,” Kownacki told SN of becoming a first-time father. “It gives me extra motivation to train because now I’m not fighting for myself.”

It’s Kownacki’s hope that his son arrives weeks removed from his latest win. That’d give extra meaning to the dad bod being the look of summer 2019.