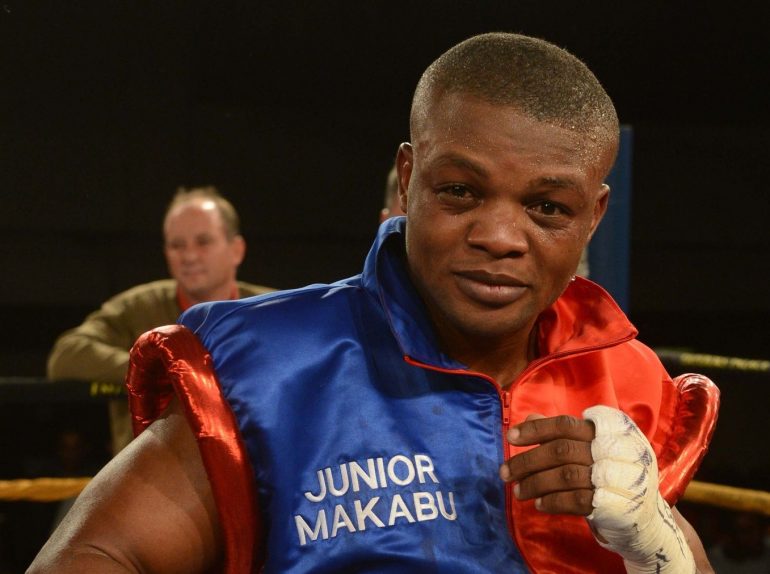 Makabu, who is rated No. 8 at 200 pounds, went to the body early in a tentative first round but elected to trade punches with Kudryashov in the second. Makabu landed a hard left hook, depositing Kudryashov on the canvas but took a shot himself and stumbled away on unsteady legs. The Russian rose and gamely fought back before being hurt at the bell.

Makabu pressured his man in the third, while Kudryashov fought mainly with his back to the ropes and attempted to counter. In the fourth Kudryashov’s nose was pouring crimson and referee Hector Afu intervened in order to let the doctor inspect the wounded fighter. He was allowed to continue.

Kudryashov knew the writing was on the wall and came out throwing heavy leather in the fifth. Makabu continued to pick him off, however, and Afu stepped between the two with Kudryashov looking like a spent force at 2:36 of the round.

It’s a long way back for Kudryashov (23-3, 23 knockouts), but Makabu (25-2, 23 KOs) is close to a second WBC title shot having come up short against Tony Bellew three years ago. Since then the South Africa-based Congo fighter has won six fights on the road in six different countries.

Alexsei Egorov celebrated his 28th birthday with a third-round stoppage over Roman Golovashchenko. The heavy-handed Russian dominated before dropping his opponent late in the second. He closed the show at 0:53 of Round 3.

This was an impressive win for Egorov (9-0, 7 KOs) who had been due to face the vastly more experienced Mike Perez before the Ireland-based Cuban pulled out on fight week. Golovashchenko drops to 20-4 (18 KOs).

Heavyweight hopeful Evgeny Romanov won a 10-round unanimous decision over Ariel Bracamonte. The official scores were 99-90 on all three cards.

Romanov dropped his man in the opening round when he caught the Argentinean coming in with a short right hand. While a quick finish looked to be on the cards, Bracamonte showed heart and, although outboxed, he landed a few shots of his own and hurt the fatigued Russian in the fifth.

Romanov responded in the sixth and left Bracamonte cut and bleeding under the left eye. The pace soon slowed and while Romanov used his greater boxing skills, he didn’t look like securing the stoppage.

Romanov moves to 13-0 (9 KOs) while Bracamonte dips to 9-3 (5 KOs). Romanov is famed for knocking out reigning WBC heavyweight titleholder Deontay Wilder in the amateurs. The 33-year-old is ready for a step up, but at 6-foot tall and 220 pounds he may be undersized and require more stamina.

Up and coming cruiserweight Alexsei Papin made short work of Alexandru Jur, halting the Romanian veteran in three rounds. Papin (11-0, 10 KOs) landed a combination along the ropes, punctuated by a right hook that turned Jur (18-4, 7 KOs) sideways and dropped him on a delayed reaction. Jur was counted out. If the 31-year-old Papin was more active, he could become a factor in the 200-pound division.

Olympic gold medalist Evgeny Tischenko continued his progression at cruiserweight, impressively stopping Abraham Tabul in the opening round with a devastating left hand. Tischenko moved to 5-0 (3 KOs), while Tabul drops to 16-2-1 (13 KOs).