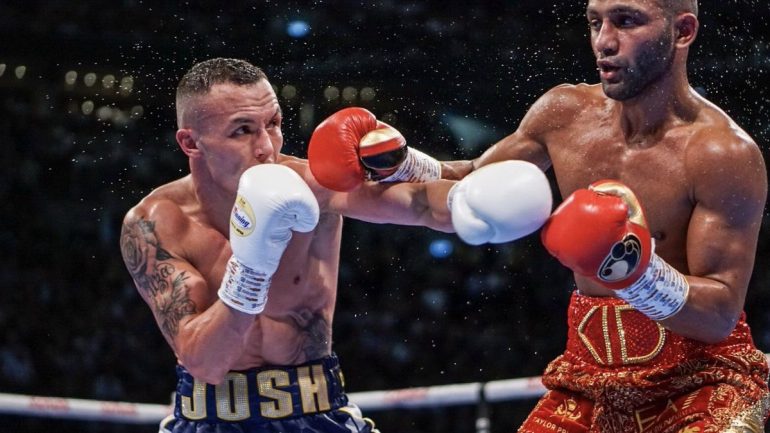 Josh Warrington fires a left at the elusive and frustrating Kid Galahad.
15
Jun
by Tom Gray

LEEDS, England – Local hero Josh Warrington retained his IBF featherweight title for the second time by scoring a 12-round split decision over a very negative Kid Galahad at the First Direct Arena on Saturday. Official scores were 115-113 for Galahad, which was overruled by 116-113 and 116-112 verdicts for Warrington. The Ring scored 117-112 in favor of the defending titleholder

Warrington, who is rated No. 2 by The Ring at 126 pounds, did well to keep his composure through 12 rounds as Galahad was guilty of persistent holding. But with his mandatory challenger now behind him, the Leeds star can look forward to potential unification showdowns against Leo Santa Cruz (WBA), Gary Russell Jr. (WBC) and Oscar Valdez (WBO).

“It was messy at times,” said Warrington (29-0, 6 knockouts) at the post-fight press conference. “They’re not all gonna be fights of the year. There was bad blood and people expect a war, but I knew it was gonna be like that. I did say that he had to take the title away from the champion and you can’t do that if you pot-shot with singles and hold as quick as you can.”

There was plenty of switch hitting from Galahad in the opening session, but the sporadic bursts of aggression from Warrington were enough to edge the session. The action was messy with plenty of clinching and the bout had the instant feel of being an untidy 12-rounder. And so it proved.

There was drama in the second when Warrington visibly shook the challenger with a sharp counter right. Galahad had been having a decent round to that point, as the blood streaming from his opponent’s nose indicated, but Warrington’s shots were far more authoritative.

Galahad, however, has skills and he’s solid at the weight. The Sheffield man succeeded in slowing the pace by clinching and feinting which reduced the frequency of Warrington’s assaults. And during those quieter spells the challenger scored with the cleaner shots and located the escape routes. Those tactics won Galahad some rounds.

Both men had mixed success during the middle rounds, but referee Phil Edwards had decided, quite rightly, that it was Galahad initiating the clinches and he issued two warnings. The pro-Warrington crowd were also in on the holding and voiced their displeasure as the action progressed. 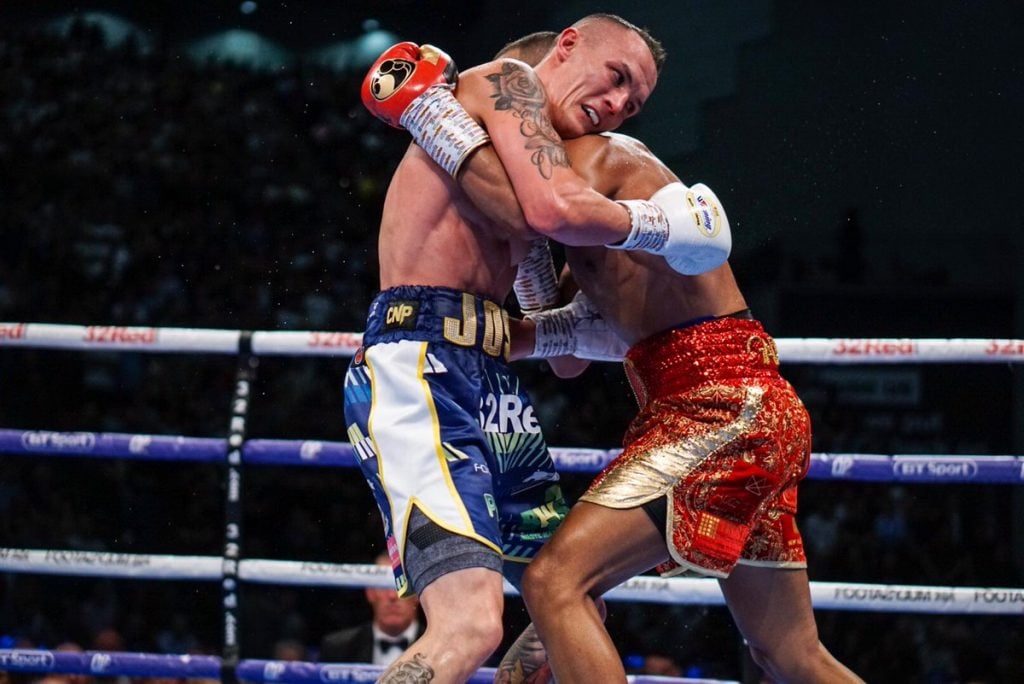 One of the many clinches (all initiated by Kid Galahad) during the fight.

With Galahad unable to hold, more openings presented themselves for the defending titleholder in the final quarter. Warrington capitalized, and although the shots weren’t clean, they were scoring and trumping anything Galahad attempted by way of counter-attack. What the challenger was still countering with was clinches and at least one point deduction would have been merited.

Warrington, who was coming off back-to-back victories over Lee Selby (to win the title) and Carl Frampton, is now in pole position to secure a unification fight with one of his rival titleholders. And fans can rest assured that a concerted effort will be made to do just that. If the last year or so has taught us anything it’s that “The Leeds Warrior” fears absolutely no one at 126 pounds. In a recent interview with The Ring, Warrington stated that his preferred opponent would be Leo Santa Cruz, the WBA titleholder, because, as things stand, that bout would be contested for the vacant Ring Magazine championship at 126 pounds.

“There’s nothing else for me to do now,” Warrington told The Ring. “When I beat Selby I went straight into a big fight with Frampton and now I’ve beat my mandatory. It’s got to be unification fights.”

Galahad’s first world title bout experience certainly won’t be filed under the heading of ‘pleasant’. However, the Sheffield man is talented and at just 29 years of age, he has time to regroup and make another run. His tricky switch-hitting style will give many of the top players at featherweight a run for their money, but it wasn’t enough to hold off Warrington. He needs to be more positive going forward.