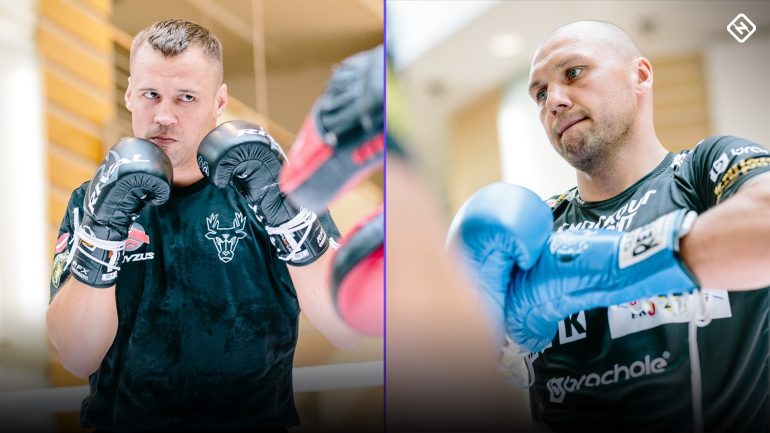 A clash of hardnosed former cruiserweight titleholders turned Saturday’s headlining World Boxing Super Series semifinal in Riga, Latvia into wild three-round shootout. The hometown favorite and star of the main event, Mairis Briedis, prevailed in a slugfest that featured knockdowns, rough stuff, fouls, a point deduction, shoddy officiating (by referee Robert Byrd) and a long round (Round 2). The fight was broadcast live on DAZN in the U.S.

During a tit-for-tat opening round and through most of an intense Round 2, Briedis’ vaunted right hand was pitted against Glowacki’s fearless overhand left. The veterans fell into a clinch with 40 remaining in Round 2, Glowacki landed a punch to the back of Briedis’ head as Byrd was breaking them up, and the Latvian star answered the foul with an equally egregious one, a quick right elbow to the Polish fighter’s jaw.

“He punched me in the back of the head, the referee did nothing, so I did a little bit of a dirty punch,” Briedis said after the fight.

Glowacki made a grimace and then fell face first to the canvas where Bryd ordered him to “Get up!”

Glowacki (31-2, 19 KOs) obeyed, and Byrd penalized Briedis one point for the infraction that could have gotten him DQ’d in another country. The fight resumed and Briedis (26-1, 19 KOs) caught Glowacki with a flush right hand that dropped the southpaw with 15 seconds remaining in the round. Glowacki got up and took an 8-count from Byrd, who asked him if he was OK to continue as seconds ticked away. The fight resumed just as the bell sounded to end the round — only it didn’t end. Byrd didn’t hear what everyone inside Arena Riga could hear.

Briedis heard the bell but kept punching and, once again, landed his right which rocked and dropped Glowacki (CLEARLY after the round should have ended). Byrd gave Glowacki a count as everyone ringside lost their minds while trying to notify him that the round had ended. It looked as though he waved the contest off for a few chaotic seconds (as Glowacki’s cornermen entered the ring to ask what the hell was going on).

But order was restored, the bell for Round 3 sounded (Byrd heard it this time), and Glowacki, storming out of his corner to earn some get-back, bombed and may have stunned Briedis with repeated left hands but the crowd hero gathered himself and once again landed a right hand that deposited the gutsy Pole to the canvas. Glowacki got up again but Byrd wisely waved it off 27 seconds into the round.

? @BriedisMairis with one of the CRAZIEST endings to a fight, and is on to the @WBSuperSeries Cruiserweight Final #BriedisGlowacki pic.twitter.com/XIcxanrMpV

Briedis, who was eliminated from last year’s WBSS tournament by eventual winner Aleksandr Usyk (his only pro loss), advances to this year’s final where he will face Yunier Dorticos, who defeated Andrew Tabiti in the other semifinal and co-featured bout of the card.