Demetrius Andrade accuses GGG of ducking him, says Canelo and De La Hoya know about it 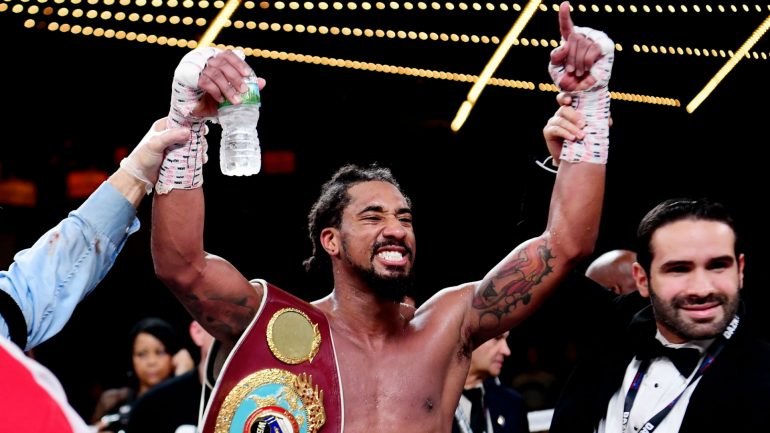 Demetrius Andrade has a significant title defense scheduled just more than two weeks away in his hometown of Providence, R.I., against Maciej Sulecki on June 29.

But he watched Gennadiy Golovkin score a knockout victory over Steve Rolls and call out his rival Saul “Canelo” Alvarez for a trilogy fight in September. Andrade also watched Oscar De La Hoya jab at “GGG” by telling him he needs to grab a middleweight belt before fighting Canelo once again. And, well, the WBO middleweight champion simply could not resist letting his Twitter fingers talk for him.

Join DAZN and watch Andrade vs. Sulecki on June 29

In a couple tweets late Sunday afternoon, “Boo Boo” accused Golovkin and his promoter Tom Loeffler of ducking a fight with him and choosing Rolls as an opponent, instead. He claimed that De La Hoya and Canelo know this alleged bit of information about their rival, which is exactly why De La Hoya told GGG to get a belt before cementing a trilogy fight.

#TRUTH @DAZN_USA tried to make the fight between @GGGBoxing and I as soon as he signed. @TomLoeffler1 and GGG said absolutely not! We aren’t fighting Andrade in our first DAZN fight! @OscarDeLaHoya @canelo know that which is Y they telling GGG to get a belt!

Andrade claims the only reason he is fighting Sulecki is because of GGG dodging him.

I wouldnt be fighting @SuleckiMaciej and @GGGBoxing wouldn’t have fought Steve Rolls if GGG would have accepted a fight with me! GGG is #1 in the @WorldBoxingOrg he was given the opportunity to fight me and said NO WAY! #TRUTH #TallBlackandHandsome #ATeam

Andrade has been on a campaign of landing a fight with GGG and Canelo for quite some time now. The latter bout would be for the undisputed world middleweight crown since Canelo holds the IBF, WBA and WBC titles and Andrade has the WBO strap.

Promoting his upcoming bout with Sulecki hasn’t stopped the 31-year-old Andrade from keeping that campaign going.

After watching Golovkin’s devastating KO of Rolls, Andrade told DAZN’s Chris Mannix that, “If Canelo and GGG don’t fight me, they need to stop boxing!”

Before any thoughts of landing either fight come to fruition, Andrade will look for a convincing victory over Sulecki at the Dunkin Donuts Center in Providence, live on DAZN on June 29.

Danny Garcia promises he will not take Ivan Redkach lightly

Promoter Eddie Hearn says Al Haymon is a genius, but…

Mairis Briedis and Yuniel Dorticos face-to-face in Riga: ‘We are going to see a war’