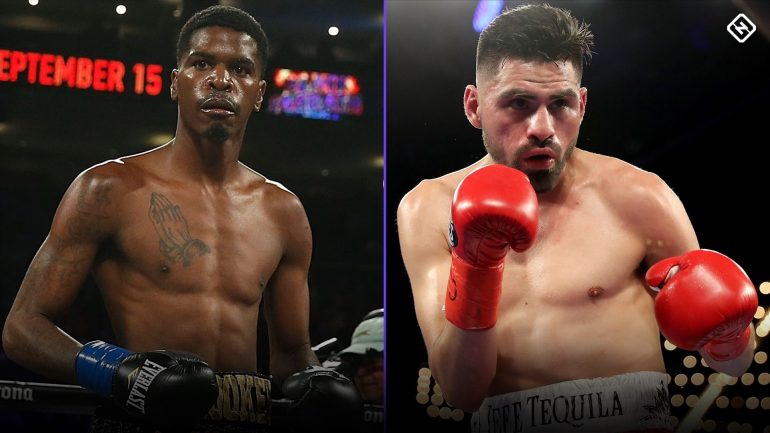 NEW YORK — Maurice Hooker walked across the seventh floor of The Renaissance Hotel in New York City on Saturday and gave a warm welcome to Jose Ramirez and his trainer Robert Garcia on sight. All three men flashed healthy grins.

In a boxing world where negotiations between fighters under two different promotions often get contentious, this world super lightweight title unification bout, scheduled for July 27, came together rather smoothly for Hooker and Ramirez. And for that, the two champions are grateful.

Join DAZN and watch Hooker vs. Ramirez on July 27

“I was thankful of my promoters — Bob Arum, Top Rank, ESPN — because they know how important of a fighter I am to them,” Ramirez, the WBC titleholder, told Sporting News about his promoters allowing him to fight the Matchroom Boxing/Roc Nation Sports co-promoted Hooker at the College Park Center in Arlington, Texas, and live on DAZN. “For them to allow me to come to a different network and different promotional company to perform, at the end of the day, they made a big step to allow me to do that.

Hooker took Ramirez’s feelings about the unification fight a step further, saying the highly anticipated bout was “easy to make.”

Adding to their thrill is the fact that both Hooker and Ramirez fully realize what’s bubbling on the other side of the division, with WBA champion Regis Prograis and IBF titleholder Josh Taylor set to unify their titles in the World Boxing Super Series super lightweight final in September. That means the path to declaring an undisputed champion at 140 pounds in 2020 is looking clear as the New York City skyline was on this sunny day.

That’s four undefeated champions of 30 and younger on the road to declaring one face, one name as the undisputed ruler. And for that, the present time for the super lightweight division sort of resembles the name of the hotel in which Hooker and Ramirez stood on this spring day — The Renaissance.

“It’s very exciting,” Hooker said. “Now we’re going to see who’s the best at 140. The division is hot. We’re young, we’re in our prime, so it’s the best time to fight each other.”

“I’m glad people are going to see who the best is at 140 at this time soon enough,” he said.

When asked who they’d like to face if victorious next month, Hooker and Ramirez each cited Prograis, but for slightly different reasons.

Hooker, a Dallas native, and Prograis, a Houston transplant from New Orleans, have exchanged trash talk in the past and know a mega fight would settle their budding interstate rivalry and for ultra-high stakes.

“If Josh wins, it might be harder to make the fight, but I’m going for Regis just because he’s from the USA,” Hooker said. “I want to fight (Prograis), I want to knock his head off. I’m just going for him.”

Ramirez added that he’d also like the opportunity to silence Prograis, whose confidence has been growing.

“I’d say Regis Prograis, too, just because he’s really feeling himself with the publicity he’s getting from the tournament,” Ramirez said. “Which is good for him (because) I believe he never had it before in his career.”

Of course, that’s looking way ahead of their own fight, which is just more than a month away.

Both Hooker and Ramirez are coming off a big 2018, having had a chance to add a quality win to their respective ledgers early this year, as well.

The 29-year-old Hooker (26-0, 17 KOs) scored a split-decision over British boxer Terry Flanagan in Manchester, England, to win the WBO strap last June. He then defended the title via a seventh-round TKO of Alex Saucedo in November and scored a unanimous decision victory over Mikkel LesPierre in March.

That sets the scene for this impending title-unification bout, with both champions curious to see how this fight plays out July 27.

“I’m excited to see how a fighter like Maurice Hooker is going to react to a fighter like myself, who’s an Olympian, who not just has the power and comes forward, but is very defensive as he’s coming forward and uses angles,” said Ramirez, who calls Avenal, Calif., home. “And all that comes from amateur experience.”

That amateur experience includes a 2011 bout against the arguable pound-for-pound best Vasyl Lomachenko in a bout that Ramirez nearly won.

“Fighters like that allowed me to better myself and learn a lot from,” Ramirez said.

To that, Hooker feels like he has had invaluable experience sparring with the likes of welterweight world champions Terence Crawford and Errol Spence Jr., who are also considered by many to be the pound-for-pound best.

“I held my own,” Hooker said of those experiences. “They didn’t push me around; I didn’t push them around. It was good sparring. It was better than some of the fights they had.”

Hooker vows to be equipped for Ramirez’s best ring work next month.

“It’s going to be an action fight,” Hooker said. “May the best man win. I’m preparing, me and my team. We’ll be ready for anything he brings.”

Getting one step closer to being crowned undisputed king at 140 should be all the motivation either fighter needs.