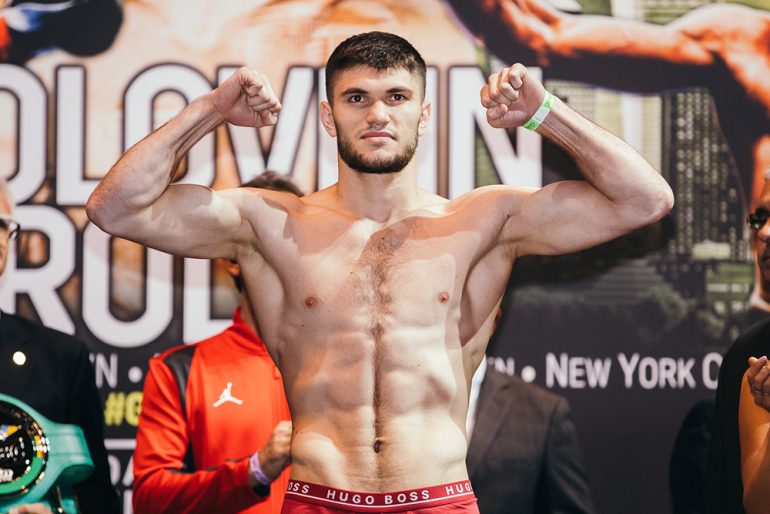 Ali Akhmedov (15-0, 11 KOs) scored a third-round TKO victory over previously unbeaten Marcus McDaniel (15-1, 2 KOs) on the Gennadiy Golovkin-Steve Rolls undercard at New York City’s Madison Square Garden on Saturday night. The official time of the stoppage was 1:41 of the third round.

The 23-year-old Kazakhstan native broke down McDaniel with a barrage of power right hands, almost knocking McDaniel out of the ring in the third round and finally finishing the Louisiana native with a succession of four punches. Although the tough-as-nails McDaniel beat the count, referee Benji Esteves stopped the bout to prevent McDaniel from succumbing to further damage.

The 6-foot-1 Akhmedov made his first appearance as a super middleweight after campaigning as a light heavyweight to begin his professional career. Akhmedov is signed to GGG promotions and Golovkin’s brother, Max, is one of his trainers.

The 35-year-old McDaniel was a victim of a drive-by shooting last August near his home in New Orleans and came back to defeat Brian Vera this past February. Prior to that, McDaniel hasn’t fought in almost three years.

While Eyubov was trying to knock Ceballo’s head off with one punch, Ceballo was comfortable enough to fight from a distance and work behind his jab to open Eyubov up for sharp combinations to cause a great deal of swelling on Eyubov’s face. At times, Ceballo, with an outstanding amatuer pedrigree, was a willing participant for a slug-fest and still was able to get the better of Eyubov, who came into the bout with a reputation for being a brawler.

Eyubov was willing to eat five punches to land one giant left hook of his own, only his left hook was not nearly enough this time, and when he did land, it was mostly behind Ceballo’s head. Ceballo diligently kept his guard up and picked off a great deal of those hooks and made Eyubov pay by landing counter right hands all night.

By the sixth round, Eyubov, while not giving up the fight entirely, started to gas amid the body shots Ceballo managed to rake across his stomach. Although Ceballo knew he was ahead in the bout, there were moments in the seventh and eighth when he seemed to think about closing the show if he could catch the Kazakhstan fighter with something meaningful. While Eyubov’s face continued to look worse for the wear, the 32-year-old fighter still pressed forward and was convinced he would land that one big blow that eluded him all night. According to CompuBox, Ceballo landed 98 more punches than Eyubov and connected on 48 percent of his punches while Eyubov only managed to connect on 24 percent.

The 25-year-old Ceballo said immediately after the bout he agreed to face Eyubov because his promoter Tom Loeffler said it was the only way to get on this card and fight in front of his hometown fans in the big room at Madison Square Garden. Ceballo appeared once in The Theater at MSG last year on a Vasiliy Lomachenko undercard. Ceballo is one of the most decorated fighters in U.S. amatuer history, winning 17 national titles and five New York City Golden Gloves championships.

The 21-year-old Conwell had Pennington in trouble several times in the bout and opened up cuts over both eyes with a succession of left and right hooks. Pennington was hurt badly in the eighth round from a body shot and then a big left hook upstairs. Conwell decided to let up on his combinations and allowed Pennington to hold on to survive the round.

Pennington was holding throughout the bout and was docked a point in the fifth by referee Arthur Mercante Jr. Conwell was the aggressor, landing his jab with precision and going to the body early and often to stun Pennington and keep him off balance.

Pennington had a few opportunities to connect with a right hand of his own but seemed tentative and resorted to throwing one punch at a time and then holding. Conwell moved well enough to control the tempo and catch Pennington walking in several times, which caused the fighter from Brooklyn to back off.

This was the first time Conwell went 10 rounds in what was the toughest opponent of his young pro career, as Pennington came into the bout having won four consecutive bouts, including victories over the likes of New York City fighters Boyd Melson and Steven Martinez before earning a draw with Jose de Jesus Macias last March. Conwell was coming off a stoppage victory over Manny Woods last December in Ohio.

Fighting at Madison Square Garden for the first time as a professional, the 20-year-old Ababiy landed a perfectly placed left-handed uppercut to the body, dropping Barajas in an instant. Following the count, the Mexican fighter stayed down for almost five minutes while ringside physicians tended to him.

The Brooklyn native is coming off a second-round stoppage victory over Dimitri Faltin this past April in London’s 02 Arena in his UK debut.

The opening bout of the evening between Jonathan Arroyo (3-0-1, 1 KO) and Jordan Morales (3-7, 2 KOs) was scratched right before showtime due to a medical issue with Morales.