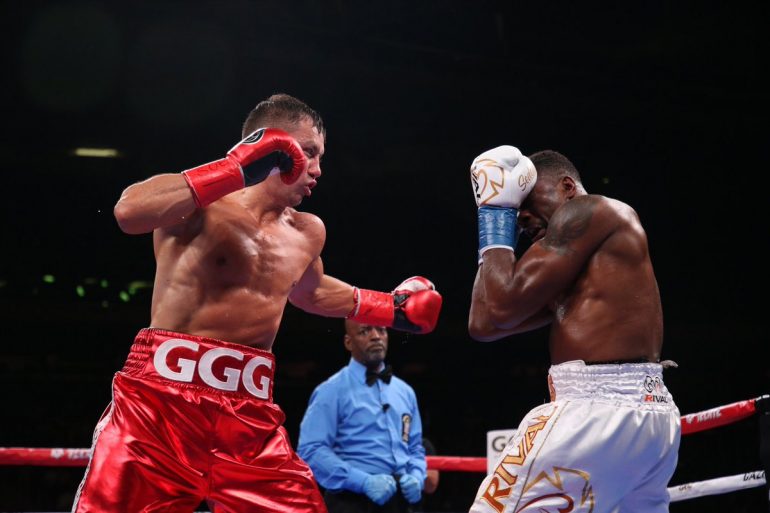 Gennadiy Golovkin was on the attack from start to fourth-round finish against Steve Rolls. Photo by Jared Silber-MSG Photos
08
Jun
by Ryan Songalia

Following the only two blemishes on his professional career, Gennady Golovkin brought the “big drama show” back to Madison Square Garden on Saturday. What he needed was less drama than his two close, debatable fights against Canelo Alvarez was an old school GGG-style thumping.

That’s just what Golovkin delivered, knocking the inspired Steve Rolls out in round 4. The conclusion came as Golovkin (39-1-1, 35 knockouts) followed up on a wobbling Rolls with an overhand left from the southpaw position that put Rolls down face-first for the count at the 2:09 mark.

There was more drama than many had expected, however, with Rolls, listed as a 25-1 underdog by DAZN’s in-house handicapper. The 35-year-old Rolls (19-1, 10 KOs) of Toronto, Canada gave Golovkin all he could handle in rounds two and three, knocking Golovkin’s head back with a straight left and using his shoulder roll to land counter right hands on the aggressive Kazakh.

Golovkin, who was working with trainer Johnathan Banks for the first time after years under the tutelage of Abel Sanchez, brought back some old wrinkles to his game that were missing in his draw and majority decision loss to Alvarez, notably his head movement and body punching.

Golovkin, 37, began to chop Rolls down with left hooks to the midsection that were set up by his head movement and left uppercut. His left hooks, thrown high on the head, began the quick descent towards the end of the fight.

The fight was a massive step-up in competition for Rolls, 35, an eight-year pro who had just one previous fight scheduled for more than eight rounds.

“I love knockouts and I love New York. It was a great night all around. I’m ready to come back in September,” said Golovkin, who last fought in November.

Looking out towards the reported crowd of 12,357, with the flags of Kazakhstan waving at full force, Golovkin alluded to the Mexican fighter with whom he still has unfinished business with.

“We know who the fans want me to fight next,” said Golovkin.

Banks, who had previously taken over for the late-Emanuel Steward as head trainer for Wladimir Klitschko, was pleased with the outcome, but still sees room for improvement.

“It’s always good to get a knockout. I like what I saw in the ring for the short amount of time we had in camp, but we can do better when we have a full camp,” said Banks.

“But we’re going in the right direction.”