Adam Kownacki vs. Chris Arreola set for August 3 in Brooklyn 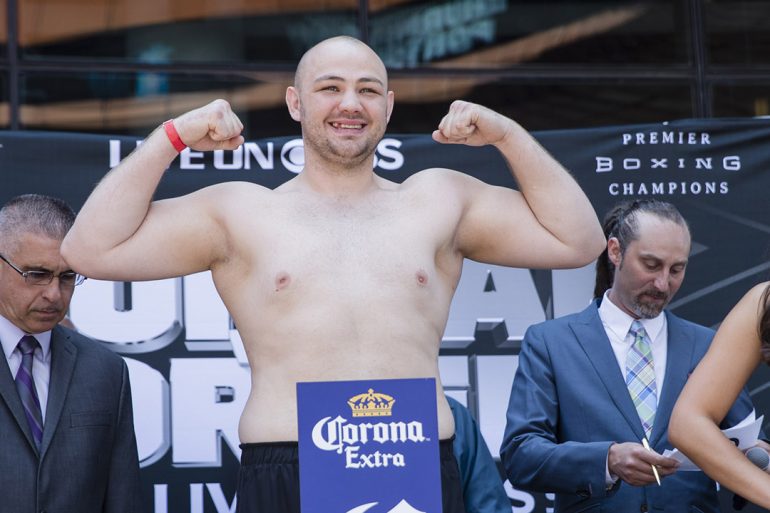 Adam Kownacki and Chris Arreola are known for their punching power and aggressive styles.

The two heavyweight contenders will square off in what should be an entertaining clash on Aug. 3 at the Barclays Center in Brooklyn, New York.

Kownacki (19-0, 15 knockouts), who is originally from Lomza, Poland, and now resides in Brooklyn, scored an impressive second round knockout win over Gerald Washington in his last bout on Jan. 26. In his previous fight on Sept. 8, which also took place in Brooklyn, Kownacki defeated contender Charles Martin by unanimous decision.

Having fought in Brooklyn before thousands of Polish-American boxing fans, Kownacki anticipates another partisan crowd in attendance.

“Fighting Chris Arreola will be another step on my journey to become a world champion,” said Kownacki. “It will be a Polish-Mexican war that will bring fireworks to Brooklyn.”

Arreola (38-5-1, 33 KOs) last fought on Mar. 16 on the undercard of the Errol Spence-Mikey Garcia welterweight title fight in Arlington, Texas, stopping previously-unbeaten, but untested Jean Pierre Augustin in round three.

The 38-year-old Arreola, who resides in the Los Angeles area, has won his last two bouts since his loss to WBC heavyweight titleholder Deontay Wilder in July of 2016.

“I can’t wait to step into the ring on August 3 and show everyone I’m still one of the best heavyweights in the world,” said Arreola, who is now trained by Joe Goossen. “I feel rejuvenated and ready to upset Adam Kownacki in front of his fans. He better be ready, because I’m going to bring it to him like he’s never seen before. This is going to be a war and I will leave with my hand raised.”

Cruz (18-1, 12 KOs) stopped Luis Eduardo Flores in round two of his last bout on Jan. 26. The Lake Mary, Florida resident had not fought in nine months, when he lost by unanimous decision to contender Josesito Lopez.

Browne (23-0, 16 KOs) became the mandatory challenger for the WBA title in his last bout on Jan. 19, defeating Badou Jack by unanimous decision over 12 rounds. The 28-year-old Browne, who resides in the New York City area, also has knockout wins over Sean Monaghan and Thomas Williams.

Pascal (33-6-1, 20 KOs), who is originally from Haiti and now resides in the Montreal suburb of Laval, lost by unanimous decision to WBA light heavyweight titleholder Dmitry Bivol. Pascal has split his last six losses, with the other two losses to Sergey Kovalev and Eleider Alvarez.