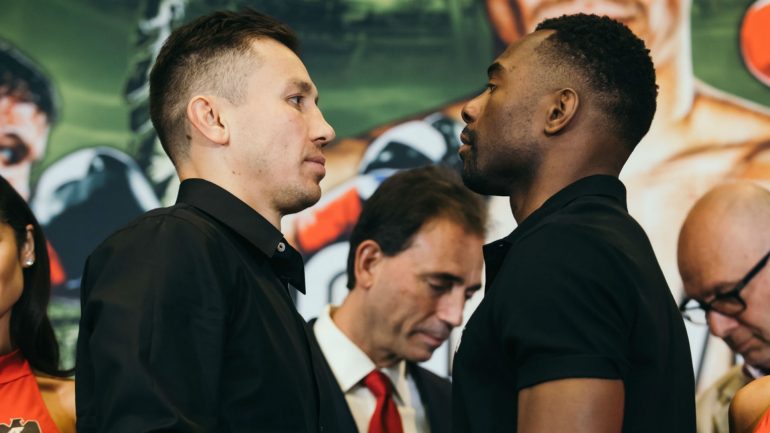 In the days since becoming the new unified world heavyweight champion, Ruiz has experienced an explosion of his social media followers, tweeted his favorite treat, Snickers, to publicly shoot his shot at a sponsorship deal and made an appearance on “Jimmy Kimmel Live” from which he should win over even more fans for his affable personality.

So, when Steve Rolls walks into the Legends Room of “The World’s Most Famous Arena” for pre-press conference access with selected members of the media, he, too, is thinking, why not him?

Why can’t the relatively unknown Canadian boxer do to Gennadiy Golovkin this weekend what Ruiz did to Joshua exactly a week before and produce the second consecutive major boxing upset at MSG?

Like the first Mexican heavyweight champion in boxing history, everybody is counting Rolls out as a massive underdog, so why can’t the 35-year-old have his Andy Ruiz Jr. moment at The Garden this Saturday night?

Easier said than done, but that’s the mindset that Rolls planned to carry into the ring with him for his 164-pound catchweight fight against the former unified middleweight champion well before Ruiz’s heroics. Now, after watching Ruiz’s rousing win, that feeling has increased tenfold.

“Even before I watched that fight, I had every plan of coming here to pull an upset,” Rolls says. “After watching that fight, I understood that when you get two guys in the ring, anything could happen.

“People count somebody out and everything … I just don’t really get that,” he continues. “I think it was more shocking for the fans and for the critics, but for my understanding, anything is possible when you get in the ring with another man.”

Ruiz reinforced that notion against Joshua, transforming his life’s work into a lead-pipe lock of a page in boxing history. Now, Rolls will be looking to do the same.

As Rolls sits with media huddled around him in the conference room setting of the Legends Room, he fully understands that his life’s work has led to this life-changing opportunity. In fact, Rolls, who juggles his personal training job in Toronto with his boxing career, walked SN through how he got the news about the GGG fight.

“I had to run to the store one night and my manager, Todd Christie, called me and told me he had some life-changing news,” says Rolls, a new dad to 6-month-old daughter Sedeah, whose name will be etched in his gloves Saturday night. “He presented me with this opportunity, man, and I was excited. I jumped right on it.

“Honestly, it’s been hard, man,” he continues, reflecting. “I’ve been through a lot of obstacles. I was trying to get these guys in the top 20, 5 through 10, I wanted all these fights. I wanted name guys and for some reason, I couldn’t get that. So, for me to finally get this opportunity presented to me, it means everything. This is what I’ve worked hard for my whole life.”

A decorated amateur on the 2009 and 2010 Canadian National Boxing Team, Rolls turned pro in April 2011. Through the years, he has sparred against the likes of Billy Joe Saunders, David Lemieux and Adonis Stevenson — with trainer Tommy Howat telling SN that he “held his own” — but struggled to get a boxer of that caliber to actually fight him.

Nevertheless, Rolls (19-0, 10 KOs) has defeated whoever has been put in front of him, including Demond Nicholson on Showtime’s “ShoBox: The New Generation” in June 2017 and KeAndrae Leatherwood during his last fight in December. That said, he has never faced a fighter the caliber of Golovkin (38-1-1, 34 KOs), whose pressure style helped him rampage to a record-tying 20 consecutive middleweight title defenses from December 2010 to May 2018 — a streak snapped by rival Saul “Canelo” Alvarez in their September rematch.

Boxing pundits said much of the same about Ruiz — that his competition aside from Joseph Parker was never comparable to that of Joshua’s.

And we all know how that turned out.

The double-edged sword of Rolls being inspired by Ruiz, is GGG being extra cautious about taking the Canadian lightly. After all, Golovkin was in attendance to see what he called a “terrible” performance from Joshua and doesn’t want to generate a similarly disappointing performance against Rolls.

“I could see the guy is motivated, he is ready to fight and go for his victory,” Golovkin told the media through an interpreter before Wednesday’s press conference, “particularly after this last weekend’s fight, which we all saw.”

MORE: Get the latest news at SN’s GGG-Rolls HQ

Furthermore, Golovkin’s new trainer, Johnathon Banks, who replaced Abel Sanchez, has crossed paths with Rolls before and won’t allow his new charge to be caught off guard.

“Steve Rolls is a tough fighter, he’s durable, but most importantly is what I’ve been saying for years and years and years,” Banks added. “When you have a guy with nothing to lose and the world to gain, he’s the most dangerous opponent you’re ever going to face.”

Even after Ruiz upset Joshua, veteran promoter Lou DiBella wasn’t willing to predict the same for Rolls and Golovkin on Wednesday, but he vows that Rolls will give the 37-year-old GGG a legit fight.

And that’s all Rolls could ask for. After all, as we again learned this past weekend from Ruiz, a lifetime of work could lead to a life-changing night.

Rolls following in Ruiz’s footsteps and delivering a grand upset of his own would give a whole new meaning to GGG’s catchphrase: “Big Drama Show.”