Can Gennadiy Golovkin get even scarier? Trainer Johnathon Banks is counting on it 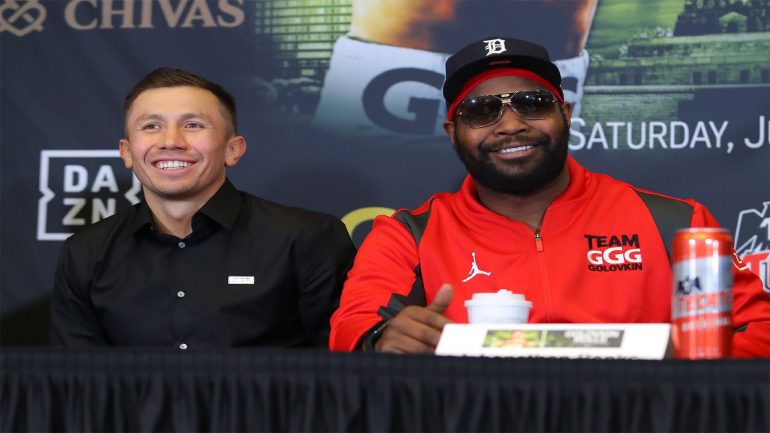 NEW YORK — Johnathon Banks can’t explain it, sitting in the Legends Room of Madison Square Garden with Gennadiy Golovkin to his right. He’s only been training “GGG” for over a month, yet their chemistry is there.

“I think we jelled together right away,” the veteran trainer tells a group of selected media members before Wednesday’s final news conference for Golovkin’s fight against Steve Rolls on Saturday night at MSG.

When Sporting News asks Banks to expound on why he thinks they have struck an early chord, the Detroit native can’t quite seem to put a finger on it. He just knows the chemistry is there.

Join DAZN and watch GGG-Rolls: Sign up in the U.S.  | Canada

“For me and GGG? It was easy,” Banks says. “It was like ice cream and cake — it just went good together. I don’t know.”

Just then, Golovkin reaches over, grabs Banks’ right forearm and interjects, “I know why.”

“Because I like the same music,” answers Golovkin, drawing hearty laughter from his new trainer.

If you didn’t know anything about boxing and saw their interaction, you’d swear the two were longtime friends. GGG and Banks seem to be a natural fit.

Coming off a majority decision defeat — GGG’s first pro loss — in his rematch to rival Saul “Canelo” Alvarez in September, the Kazakhstani warrior sought change, relieved longtime trainer Abel Sanchez of his duties and tabbed Banks as the new man for the job. Banks, a former boxer who was trained by the late Emanuel Steward, took over guiding Wladimir Klitschko’s career when the legendary trainer fell ill and passed away in 2012.

Banks trained Klitschko, helping the unified world heavyweight champion push his unbeaten streak to just over 11 years before he lost to Tyson Fury by unanimous decision in November 2015.

Just as when he began training Klitschko during a pivotal time in the heavyweight’s career, Banks is now being tasked to step in and do the same with Golovkin, who’s looking to defeat Rolls and cement a trilogy fight with Canelo for the third straight September.

Banks made it clear Wednesday he’s not looking to overhaul GGG’s style — just refine it and add some new wrinkles. After all, why would he completely change Golovkin’s game, when that forward-fighting, pressure style has garnered the former unified world middleweight champion a 38-1-1 record, with 34 KOs?

“Only difference is, now we got different ways of going about it,” he said. “We’re not just looking for the one-punch knockout. We’re doing multiple things in hopes to still get it, but if we don’t, we’re confident that we could go 12 rounds and still get a decision.”

MORE: How to watch GGG vs. Rolls

Their first test together is making sure there are no hiccups against Rolls, a relative unknown, but still undefeated Canadian boxer.

Rolls (19-0, 10 KOs) was inspired by Andy Ruiz Jr.’s shocking seventh-round TKO upset of Anthony Joshua to be crowned the first Mexican heavyweight champion of the world last weekend at The Garden.

“Even before I watched that fight, I had every plan of coming here to pull an upset,” Rolls said during his media roundtable access. “After watching that fight, I understood that when you get two guys in the ring, anything could happen.”

Golovkin witnessed the staggering upset as well: the last position he wants to find himself in, at the same venue exactly a week later. That’s precisely why Golovkin is not taking Rolls lightly.

“What I could see, the guy is motivated, he is ready to fight and go for his victory, particularly after this last weekend fight, which we all saw,” Golovkin said through an interpreter.

Banks takes that a step further.

“Steve Rolls is a tough fighter, he’s durable, but most importantly is what I’ve been saying for years and years and years,” Banks said, “when you have a guy with nothing to lose and the world to gain, he’s the most dangerous opponent you’re ever going to face.”

MORE: Get the latest news in SN’s GGG HQ

For this fight, the new watchful eye in Golovkin’s corner will be looking for his new charge to show some early flashes of the added skills the two have worked on together.

“I’m looking for little things in this fight,” Banks says, “not big things, because we’ve had such a short time.”

Already, Banks was pleased with what he saw from Golovkin during his public workout outside of MSG earlier in the week.

There, the 37-year-old GGG showed some spring in his step and looked quicker and more fluid with his head movement from what we’ve seen in years past.

The cherub-face Golovkin has always been known for his ruthless knockout power. Banks adding swift head movement and speed to GGG’s fight game could make him even scarier, if that’s possible. In fact, Banks is counting on it.

“I think in the public workout, you seen the little differences that you may have not seen before,” Banks points out during the media roundtable. “That’s what I’m hoping that you see on fight night.”

When Banks analyzes Golovkin’s fights with Canelo, he — like many others — doesn’t agree with the results. A majority of boxing pundits felt Golovkin was robbed of a victory in their first clash back in September 2017 in a fight that was controversially ruled a split draw. While the rematch last September was a lot closer, Banks didn’t see it as a majority decision in favor of Canelo. So, those two results don’t sit well with Banks.

“I had mixed feelings about it,” offers Banks, who turns 37 later this month. “I thought they were both competitive fights. You can’t take that away from either fighter.

“Me personally, I didn’t judge the fight the way the judges judged the fight,” Banks continues, honing in on the rematch. “I just didn’t think that he, meaning Canelo, was that decisive when they called it a victory. They were scoring some of the rounds kind of close, but really, they gave him a decisive victory.

And that’s what Golovkin is doing, with Banks by his side.

The boxing community, like Banks, will see the new skills Golovkin puts on display against Rolls on Saturday night. If Golovkin wins convincingly as expected and secures the trilogy fight with Canelo, then we’ll really see how much Banks’ training pays dividends.