Kemahl Russell: ‘This will be my breakout year’ 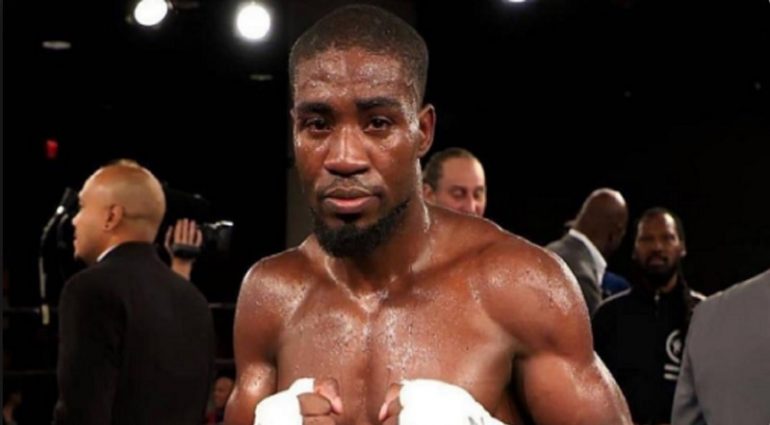 The middleweight division is, yes, a glamour division in the current fight game scene and because there are a couple hotshots atop the 160-pound class, there is no shortage of hitters who are clamoring to scratch, claw and elevate themselves to that top tier.

Jamaican hitter Kemahl Russell is “only” 13-1 (with 11 knockouts) but he has decent pro experience, has been in with enough solid types to know where he stands in this sphere and is now aligned with an A-grade trainer. We might want to keep an eye on his ascent because, in the near future, he could be climbing.

I checked in with Russell, an affable sort, via phone, and he clued me in that he will be New York soon because he’s training with Andre Rozier.

Russell is sifting promotional offers and Rozier co-manages him now, alongside Leiza-Mae Keane . They’ve worked together since the middle of 2018 and he said everything is getting better; he’s tightening up the offense. “I’m learning new things,” Russell told me. “I will be back to Brooklyn very soon.”

One reason I decided to do this story on Russell is because I’ve seen him live, back in 2017, and I was quite impressed by him. And you know what? I became more impressed by him when we discussed the fight I watched. It was Russell versus Ian Green, September 9, 2017, at Resorts World in Queens, on a Real Deal Boxing show. I worked the color chair, next to Barry Tompkins, and saw the Jamaican score a seventh round stoppage victory in a scheduled eight-round showdown.

“I remember everything; it was my first official WBC (regional) belt. I remember each round,” the fighter told me. He shares that Team Green had been calling him out for a fight for about three years beforehand.

“They expected one type of fight; they expected a one-dimensional fighter, that they were gonna beat me up. Unfortunately for them it ended up something different.” Russell then proceeded to describe what happened in each round and I don’t recall a fighter having such recall of one of their fights, such specificity, so long after it occurred. “In the first, I hit him with a right hand. His eyes opened up wide, real wide, like, ‘What is this?’ The second round, I started backing up, started getting momentum. First, I wanted to set my dominance, show him that I’m the better man; that’s what I did. Round three, I was pulling away, throwing combinations. Most were connecting; I wasn’t worried about getting Ian out of there, just doing my work, scoring points, keeping the pressure up. In the end of the third, I was trying to go under a punch. He caught me in the ear, busted my eardrum. I couldn’t hear anything for three days,” he said, chuckling.

“Boxing is funny. You can win but lose something, lose but win something! So basically I dominated round three. In round four, I thought they’d stop the fight; they didn’t. I kept doing what I was doing, they maybe thought I would gas out, get tired, winded, stop throwing but I kept doing what I was doing. I think they should have stopped it round three or four. I was breaking him down systematically. I was throwing combinations, using my jab, keeping my distance, inside, at any distance I was dominating, mid-distance, far range. I was beating him,” Russell said. ” In round six, I was picking up the pace; my team told me to relax. I was trying to get him out of there. I calmed down; I just kept working, working the body. The commentators were making statements, saying Russell is a bit tired. That wasn’t so. I realized I wasn’t going to knock this kid out with just one punch. I was breaking him down, breaking him down. One of my strengths, I like going to the body – a lot. One of my favorite punches, a left hook to the body. I hurt Ian several times during the fight and I could have loaded him up and got him out of there. I think I came in with a mindset and I stuck with what came to do, just let my hands go, don’t load up, short, crisp shots and box smart.

“Mike, in round three, when I got hit in the ear, I was sitting on the stool, two (cornermen) talking to me, one coach outside, one in front of me, one on the outside, my strength-and-conditioning coach, who died a few months ago…I couldn’t hear the one outside, my eardrum busted, so I had to turn my head like an owl. It was crazy,” he said, chuckling again. “The doctor checked me, said I was good. In round seven, I was just downloading all the things from the first three rounds and my speed, timing, I got comfortable. I was counterpunching, controlling, pushing him back, controlling him, then I decided enough is enough. They should have stopped it earlier, round after round. They made him suffer, more beating, more hits to the head.” 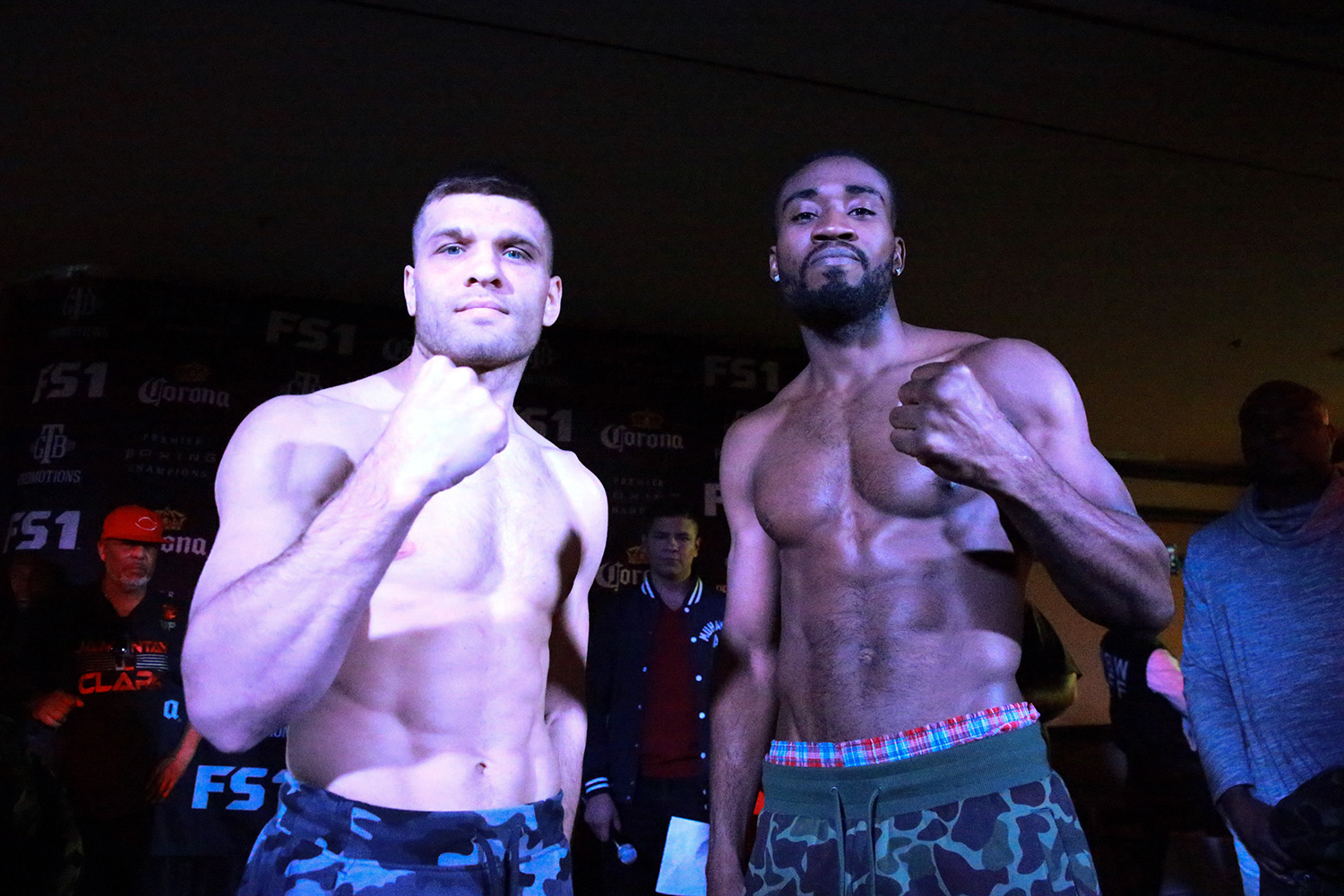 Sergiy Derevyanchenko (left) and Kemahl-Russell at the weigh-in for their Fox Sports 1-televised match on March 14, 2017. Photo by Leo Wilson / PBC

We also touched on that lone loss on his ledger. It came versus Sergey Derevyanchenko, also a Rozier client. “I coulda done much better in that fight,” Russell said of the fifth round stoppage loss to the Ukrainian, in March of 2017. “It might have been a more competitive fight and my name woulda been called more but it happened. I had only two weeks notice. The ending? I think I got a little bit too comfortable. I remember in round three or four…I threw and I was getting off the angle, turning, he caught me under the elbow on the liver, moving to my left, unexpected and my legs were gone. My first thought was take a knee; I guess I was playing the tough guy, ‘You’re gonna have to stop me!’ He was throwing a lot of punches, using angles, changing angles. He’d hit you again; he’s a very good fighter. I was cut for the first time in career. Now something told me to bring my own cutman but I didn’t. I paid someone to come in my corner; they did a shabby job. I was talking to my coach; I came back out and the cut started bleeding immediately. I couldn’t see from my left eye. It was the wrong game plan. You know I went to camp with Sergey for his Danny Jacobs fight? He saw, I think, I was actually better than what he thought he was, I started moving and he had a lotta problems.”

Russell, holding the NABF 154-pound strap, said he went 17-1 as an amateur, with a bunch of KOs but from that you get that he still has room to learn. “Am I in my athletic prime? I feel good, about to reach my prime. I think I have a lotta good fights left in me. This will be my breakout year, I’m about to show who I am!”