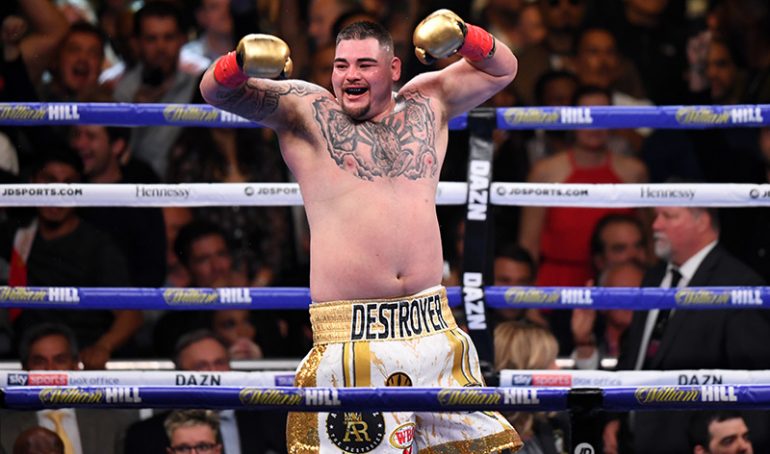 Andy Ruiz celebrates in the ring after his stunning upset. He said it still felt like a dream during the pot-fight presser. Photo by Matthew Heasley
06
Jun
by Doug Fischer

In a year of upsets, there’s no debating that the biggest of them all occurred on June 1 in the glamor division of the sport when Andy Ruiz Jr. shocked Anthony Joshua and the boxing world by getting up from a third-round knockdown to drop the British star four times en route to a almost surreal seventh-round stoppage.

Ruiz (33-1, 22 KOs), unrated by The Ring going into the fight and as high as a 15-1 underdog, made history as the first pro boxer of Mexican descent to win major world heavyweight titles – and the 29-year-old Californian collected three of them (the IBF, WBA and WBO belts).

Since the monumental upset, there’s no debating that Ruiz, who took the fight on late notice, is the hottest story in global sports with his modern-day “Rocky” narrative. The only thing that could be debated was where the chubby “Destroyer” landed in the rankings, and you better believe the Ring’s Ratings Panel and Editorial Board went back-and-forth over where to place the affable spoiler.

On one hand, he unseated the previous No. 1-rated heavyweight, Joshua (22-1, 19 KOs). On the other, he doesn’t have the body of work that Joshua compiled while collecting three major world titles; nor does his resume quite match those of lineal and former Ring champ Tyson Fury and WBC beltholder Deontay Wilder.

Here’s what the Panel had to say on the matter:

“Who saw that coming!? Upset of the Year slam dunk already,” said Anson Wainwright. “I think the new heavyweight line up should go as follows: 1. Fury, 2. Wilder, 3. Ruiz, 4. Joshua, though have no arguments if people want Ruiz at No. 1.” 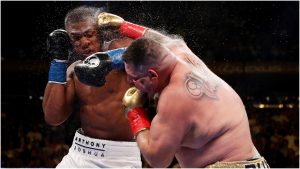 Adam Abramowitz did not.

“So, you knock out the number-one guy – no close points win, no controversy – and you are somehow only No. 3? Yeah, not seeing that. No. 1 for me,” Abramowitz said.

“There’s definitely an argument for it,” replied Gray, “but you need to factor in that Ruiz went ‘Thrilla in Manila’ with Joseph Parker.

“Fury has the better resume and he’s more proven over a longer period of time. Wilder, who I’m no fan of, has been a world titleholder for several years.

If the majority of the panel goes for No. 1, I’m good with it, but it’s not cut and dry by any means.”

“I agree with Tom but easily see where Adam is coming from. I’d find it hard to put Ruiz above the other two, even though you can make a sound case for it.”

Panelists Martin Mulcahey and Coyote Duran suggested that Ruiz enter the rankings No. 2.

“I still look upon Ruiz as undefeated, because I think he beat Parker but it was close enough, I guess. I throw my vote to Ruiz at No. 2 behind Fury (who I thought defeated Wilder) but going by official judges’ results have no big issues with No. 3 ranking. So, I like it to read: 1. Fury, 2. Ruiz, 3. Wilder, and 4. Joshua.”

“This is a tough call. Ruiz just beat the No. 1 guy and left no controversy about it,” he said. “You can certainly make the argument that he beat Parker and Saturday night should’ve been a unification bout. You can also make the argument that Fury beat Wilder last year. However, that is not the way that the official scorecards went.

“Who has the better resume? It’s close:

– Andy Ruiz has now fought undefeated versions of Parker and Joshua. Close fight with Parker and a domination of Joshua. (Zero fights in 2017, however)

– Fury has fought Klitschko and Wilder. He neutralized Wladimir Klitschko in a terrible fight and had a close bout with Wilder.

– Wilder has fought Luis Ortiz and Fury, both of whom were outboxing him until his power bailed him out.

The majority of the Panel went with “eye test” and overall body of work in recent years. Ruiz re-enters the rankings at No. 3. Joshua drops to No. 4.

Bring on the rematch!

Heavyweight – Ruiz crashes rankings at No. 3. Joshua falls from No. 1 to No. 4. Tyson Fury and Deontay Wilder are now Nos. 1 and 2. Should they hold their current placement going into an anticipated rematch in early 2020, the vacant Ring title will be on the line. But, as June 1 reminds us, a lot can happen in the heavyweight division in that time.

Cruiserweight – Maksim Vlasov (now fighting at 175 pounds) drops out. Lawrence Okolie beat out Yves Ngabu for the No. 10 spot.

Middleweight – Ndam drops out of rankings and Ryota Murata returns at No. 10.

Junior lightweight – Jamel Herring enters the rankings at No. 4 after outpointing Masayuki Ito, who drops from that spot to No. 7, lifting the WBO title from the slight odds favorite from Japan.

Featherweight – Xu Can advances one spot to No. 6 after chopping down former 122-pound beltholder Shun Kubo to a sixth-round stoppage, displacing the inactive Abner Mares.

Junior flyweight – Carlos Canizales advances one spot with a wide UD over former flyweight titleholder Sho Kimura, who enters at No. 9.

Strawweight – Wanheng Menayothin holds his No. 2 spot with an eight-round technical decision over No. 8-rated Tatsuya Fukuhara.