Opinion: Katie Taylor’s win over Delfine Persoon was no robbery 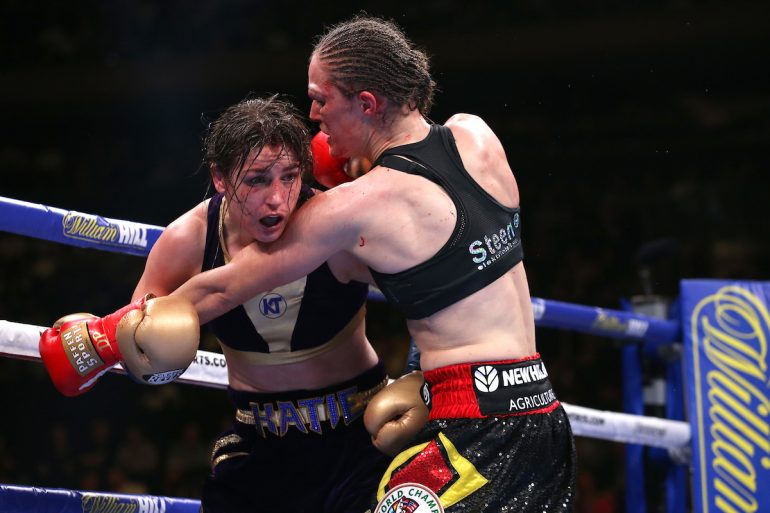 The fight started out, for many folks, in a surprising manner. We heard commentators Brian Kenny and Sergio Mora talk about how people aren’t used to seeing Katie Taylor, the Irish pugilist, win PORTIONS of rounds, let alone whole rounds.

And it was noted, in round one of the Taylor clash vs. Delfine Persoon of Belgium at the redoubtable Madison Square Garden in Manhattan, on Saturday evening on this DAZN presentation, that Persoon was a slow starter.

Not on this night…In round one, we saw Taylor having to work hard, and backing up, while Persoon took rushes at her. Yep, her balance was often off, she was squared up, Persoon got tagged with some counters. But a judge, or you at home, could easily have been impressed by her aggression, and given her round one. Taylor maybe won the round, maybe it was Persoon’s, maybe it was a 10-10. Judges, but of course, just get the one crack at their card. I will award it to Taylor, without conviction.

Taylor entered a 10 to 1 favorite, viewers were told before round two.

To start round two, we saw the WBC lightweight champ Persoon, whose lone loss came back in 2010,  slipping and dodging deftly, to avoid getting hit clean by a Katie combo. We all know that there is nothing as subjective as judging a boxing match, except perhaps in assessing the beauty or lack thereof in one’s newborn baby–but in watching the first half of round two, we saw Persoon as the aggressor. Now, was it “effective” aggression? Well, it wasn’t ineffective, as Taylor had to work faster than she was used to. She had to back up to keep the sturdy Persoon, age 34, from freight-training her. A right hand landed by the Belgian hitter knocked Taylor’s head back, as she backed up, and was the best punch of the first half of the round.

Pressing forward, while we heard about the superiority of the Taylor footwork, Persoon landed another quite solid right. Twelve seconds before, the 32 year old Taylor had connected with her own right, but did it have the same mustard on it? In my viewing, Persoon’s aggression, and indeed, it was effective, if offered in a less technically sound manner than Katie, gave her round two. On the Woods card, with benefit off stop and starts, 1-1 after two.

“That was a good round for Persoon,” Kenny stated, as we heard the Taylor corner tell their lady that she needed to step more, and not let Persoon take runs at her. “Round one Persoon looked outgunned,” but the right was sweet, Kenny noted, before the third started.

Looks like Mora was now eyes fully wide open to what was happening; “not for nuthin’ Persoon’s not out-gutted,” he shared, after admitting that he was struck by her messy footwork. Yes, friends, we all, most of us, bring notions, pre-conceptions, to the table, when we are dealing with most issues in life.

To round three–the length and aggression, yep, I know I keep coming back to THAT word, helped Persoon to start the frame.

Was a bit of frustration creeping in? Or naw, maybe Taylor just knew this was more a FIGHT than a boxing match? She used a forearm to the neck of Persoon as they scrummed on the ropes.

Ref Sparkle Lee called for a break…Much of the action was in tight, the 5’5″ Taylor wasn’t able to just slide away, get a better angle, because big Persoon was in her face, cutting off the ring on her. A Taylor right, maybe the best punch of the round, landed, but didn’t dissuade the Belgian boxer at all. The aggression, the fact that Taylor was getting backed up, beaten to the punch, that Persoon was busier, and, by the way, did well to slip shots, gave the 5-7 Persoon round three on my card. Persoon, 2-1. Chris Mannix of DAZN also had it 2-1 on fight night, to this point.

To round four…Taylor might have edged the first half of the round with a nifty combo at the 1:05 mark, but it was a coin-flip minute. Taylor’s ability to get more space was winning her the round as we ticked down. Tight, tight round..benefit of the doubt goes to Taylor, to be frank, because I want to be mindful of potential bias, in regards to my admiration for Persoon’s efforts. 2-2, after four, on my card…But that round could have gone either way. Oh yes, Mannix had it 2-2, too. (And a note here: Kenny gets tons of flack on social, and no, I don’t fully get why. Here, he tossed to Mannix to ask about his card, in terms of what the judges MIGHT be seeing. He’s a sharp dude, and gets busted on too much on social. OK, end digressionary defense of BK.)

Bad start to round five for Taylor…Persoon blitzed at her, Katie had her back to the ropes, and Katie then waved Persoon forward again. And got cracked with a right to her schnoz. She waved the Belgian forward again! They scrummed, and there was no clear winner in that interlude. Kenny asked if Persoon was “sturdy” enough to keep it up, jeeze she sure looked sturdy as heck to this point, and I detected no energy loss. Meanwhile, was Taylor’s tank level dipping? She had a nick or two on her face, her hair was disheveled, and she looked a bit worse for the wear. Also, Persoon’s face was getting touched, and she too looked like she’d been in a bout. Not an easy round to score…coin-flip special…both persons had their moments…so I’m going 10-10 for round five. I see it 2-2-1 to this point.

Post-round, Taylor trainer Ross Enamait told KT that “it’s not how you feel, it’s how you look” and advised her to get distance, don’t get into close-quarters situations. Smart advice, but also easier said than done. Remember, Taylor is 32, not a bubbly youth. We get miles on us, and sometimes those legs get more leaden, at 32, than they were at 22, or 27…We saw a nick on the bridge of the nose of Taylor, and under the right eye, and lil blood coming from her nose. And yes, sometimes judges see those things and it affects them. “Be sharp, let’s go Katie,” said the trainer. Yes, if you want to infer, his tone suggested he wanted and needed more of what he wasn’t seeing from his lady.

It worked; Katie’s start to round six was maybe her best. She gave Ross what he wanted, a body strafe, and then hurled fluid combos, while moving, and not letting herself get glued to the foe who works as a police officer in Belgium. Sweet check-hook from Taylor, her movement was on point, and yes, Persoon’s face was a bit swollen and nicked, too. That was Taylor’s best strategic round and she won it, conclusively. 3-2-1, Taylor, after six, on my card.  Mannix saw it 3-3 to here.

In the seventh, Taylor boxed smart, moved a lot, in the first half, to take that portion. A Persoon right cross, in tight, was the best punch of the round, and did Persoon win the second half of the round more conclusively than did Taylor the first? She did; 3-3-1 on the Woods card. “Persoon not letting Taylor be accurate, constant pressure,” analyst Mora noted, sagely. Replay showed a right-left-right from Persoon was a very decent combo during some trench-time.

To the 8th…Persoon was so eager to impress, she was lunging at Taylor. But in a bad way? Not to me..she was off balance, but trying to push the fight. She had the Irish gal backing up, on that back foot, fighting to survive, not thrive. “It’s an ugly fight, a sloppy fight, but an effective fight for Persoon,” said Mora. If you looked close, you saw Taylor seeking out clinch time, and that’s perhaps telling. I think desire and stamina and fighting spirit won Persoon the round, but it was tight, and yeah, probably a coinflip. 4-3-1, for Persoon, after 8. The left eye brow of Persoon was ballooned, we could see. “C’mon, wake up, let’s go,” Taylor’s trainer told her. Persoon out-landed Taylor, 14 to 8, according to stat counters, also. 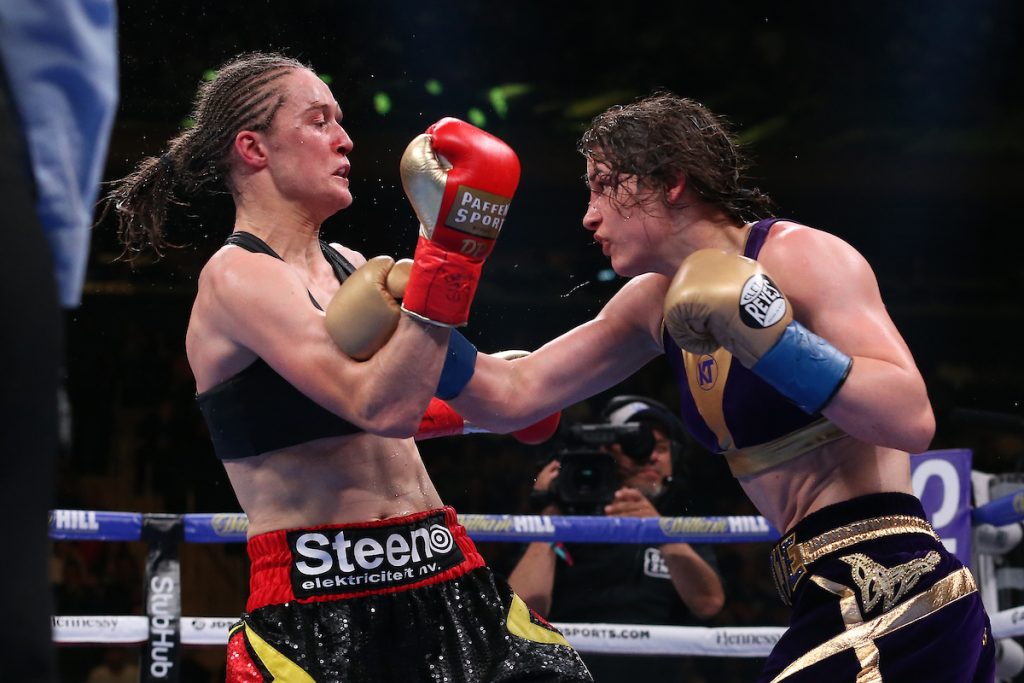 To the ninth round…Taylor’s ring generalship won her the first minute, she was able to get some distance from the cop. After trading, Taylor went to her knees, no knockdown, at the 35 seconds mark.

Guess what? On re-watch, this round was tighter than I recalled. Like, so tight, an even round would be totally appropriate. Or, if you liked the technical edge from Taylor, you could score it for Katie. Me, I saw an even round, no one pulled away and I won’t pretend that I saw different. 4-3-2, four rounds for Persoon, three rounds for Taylor, two rounds even. Katie would need to win round ten to snag a draw on my re-watch card. Maybe that check-hook by Katie spoke to judges who saw her winning the ninth.

To round ten..You’d want, but would not be able to employ, super slo-mo, to decide who won the first minute of the tenth. Tit for tat, inside fighting, both busy, both neglecting defense a tad, because of fatigue. “Taylor looks gassed,” Kenny said, as Persoon bullied her, kept windmilling, backed her up. The cleaner and harder shots were thrown by Persoon, and she conclusively took the second minute of the round, and thus won round ten. The 20,201 in the building stood, cheered, and marveled at the intensity and the entertainment value of that fight. And yes, it was a fight more than it was a boxing match.

Now, both would wait. We heard Persoon out-landed Taylor, 28-10 in the tenth. “Persoon mighta just been great tonight,” said Mora, hinting that it would be up to three judges to define what we all saw.

Indeed, we can look back and say yes, Persoon was great on this night. I had it 5-3-2, with Persoon the winner.

David Diamante told us that Don Trella saw it 95-95, even. You knew then that it wasn’t a draw, because Diamante would have chosen which score to read first differently if it were. “Allan Nace and John Poturaj both score the bout 96 to 94 for your winner, by majority decision,” said Diamante, and we saw Taylor lower her gaze to the floor, and Persoon look up, hopeful…. “and now the undisputed lightweight champion of the world KAAAATIE TAYYYYLOR,” Diamante finished.

“Delfine Persoon is incredulous and I understand why,” said Kenny. “And also understand how a judge can see Taylor might have won that fight, Sergio, but I do see why Persoon is thinking, ‘You’ve gotta be kidding me, how did I not do enough.”

Persoon exited the ring, disgusted. The camera saw the warrior walking to her dressing room, and begin to crumble. She started to cry. The cop had lived through a robbery, in her eyes, and she was distraught, understandably so.

But let me finish by reiterating..this wasn’t a robbery.

I get why Persoon thought it was. I saw her winning. But close rounds, rounds that aren’t conclusive, very often those will be awarded to the better known, better connected boxer. That isn’t alleging corruption, or ineptitude, by the way. It’s a matter of human nature, us being inclined to go with what we know.

The now IBF/WBA/WBO/WBC champ Katie Taylor is at this time more of a known entity in the States, and she got that benefit of those doubts.

Not sure what else to do here, but run it back. Do a rematch, do it soon, do it in a few months, and get ready to enjoy these two stellar warriors seek to improve upon what was a superb outing.

No robbery, let’s book the sequel.