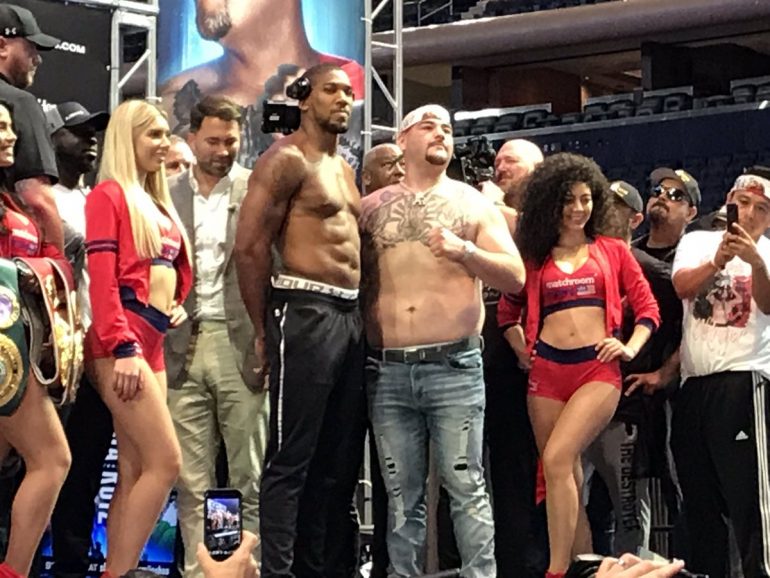 NEW YORK — Anthony Joshua and Andy Ruiz Jr. breezed through the perfunctory heavyweight weigh-in on Friday, with both coming in heavier than their prior fights.

Joshua (22-0, 21 knockouts), holder of the WBA/WBO/IBF belts, weighed in at a chiseled 247.8 pounds for his United States debut at Madison Square Garden, while Andy Ruiz Jr. (32-1, 21 KOs) weighed 268 pounds. Ruiz was six pounds heavier than his previous fight, a fifth round stoppage of Alexander Dimitrenko a month ago. Joshua was slightly over 245 pounds last September when he stopped Alexander Povetkin in seven rounds.

The Garden was turned into an extension of London as the fans belted out the lyrics to “Sweet Caroline”. The British fans drowned out the Mexican fans, body shaming Ruiz with chants of “you fat bastard”, with Union Jacks and the red and white flag of England being flown around the arena.

The other Ring championship belt to be handed out Saturday night features three-belt unified lightweight women’s champ Katie Taylor (13-0, 6 KOs) of Bray, Ireland against WBC titleholder Delfine Person (43-1, 18 KOs) of Belgium. Taylor was 134.6 pounds on the scale while Persoon was much lighter at 130.6 pounds.