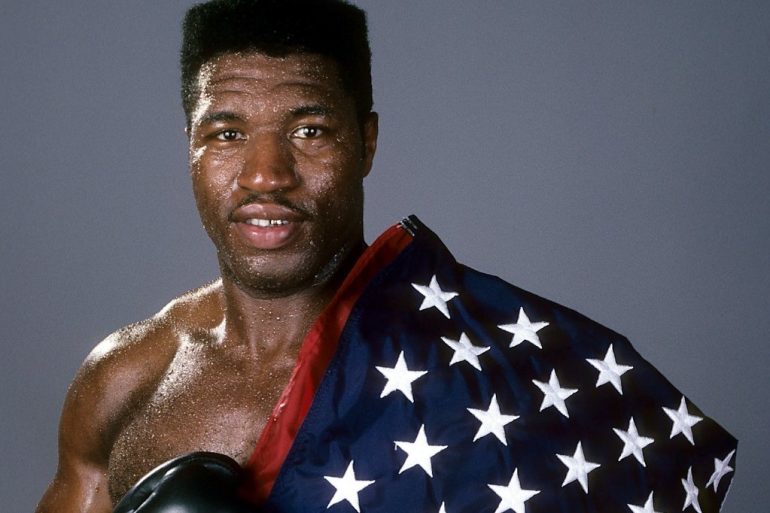 Photo from The Ring archive
29
May
by Anson Wainwright

In the early 1990s, Ray Mercer was regarded as one of the best heavyweights in the world. Owner of one of the most durable chins in the division, as well as fight ending power, he was capable of giving the very best a tough outing.

Mercer was born in Jacksonville, Florida on April 4, 1961. His father was in the military and served in Vietnam.

“We had a good life; we lived the military life,” Mercer told The Ring. “We traveled overseas, we lived in Germany when I was 15. I went to high school there.

“I used to love playing in the woods and living on post, we always felt safe. The only bad thing is every three years you’re going somewhere else, you lose track of your friends.”

Mercer knew he wanted to follow in his father’s footsteps and joined the services at 20. At that point boxing wasn’t on his radar.

“The first time I put on a pair of gloves, I was 23 years old and had been asked to be a sparring partner in Germany,” Mercer recalled. “That’s when I really caught onto it, that I liked it. I asked the trainer to show me how to defend myself without getting beat up every day. He showed me and in about two months, I made the guy I was sparring quit.”

Mercer went on to have a very successful amateur career and reached the pinnacle. After beating future heavyweight titleholder Michael Bentt at the Olympic trials, he represented his country at the 1988 Olympics in Seoul.

“It was the best thing that ever happened to me to tell the truth,” Mercer said humbly. “I was not going to be denied, I worked too hard. I was 28 years old on the Olympic team, so I knew how important it was to train and I knew you only get a certain amount of chances. I was older than all the other guys. I think I took it a little more serious than they did.

“To have the whole country behind you was so exciting, I always dreamed of that.”

Mercer stopped all four of his opponents en route to collecting the gold medal. He had compiled a stellar amateur record of 86-6 and left the infantry division to embark on a professional career in 1989.

Now a contender, Mercer parlayed that success into fighting unbeaten 1984 Olympic super heavyweight silver medalist Francesco Damiani for the then-lightly regarded WBO title in January 1991. Mercer was trailing on the scorecards when he stopped the Italian in nine.

In the summer of 1991, Mercer was scheduled to defend his title against Tommy Morrison, but the challenger was cut in sparring and Riddick Bowe stepped in. That bout didn’t take place either because Mercer injured his ankle and the Morrison bout was eventually rescheduled for October. After absorbing the best Morrison could muster, Mercer closed the show in emphatic style in the fifth round. 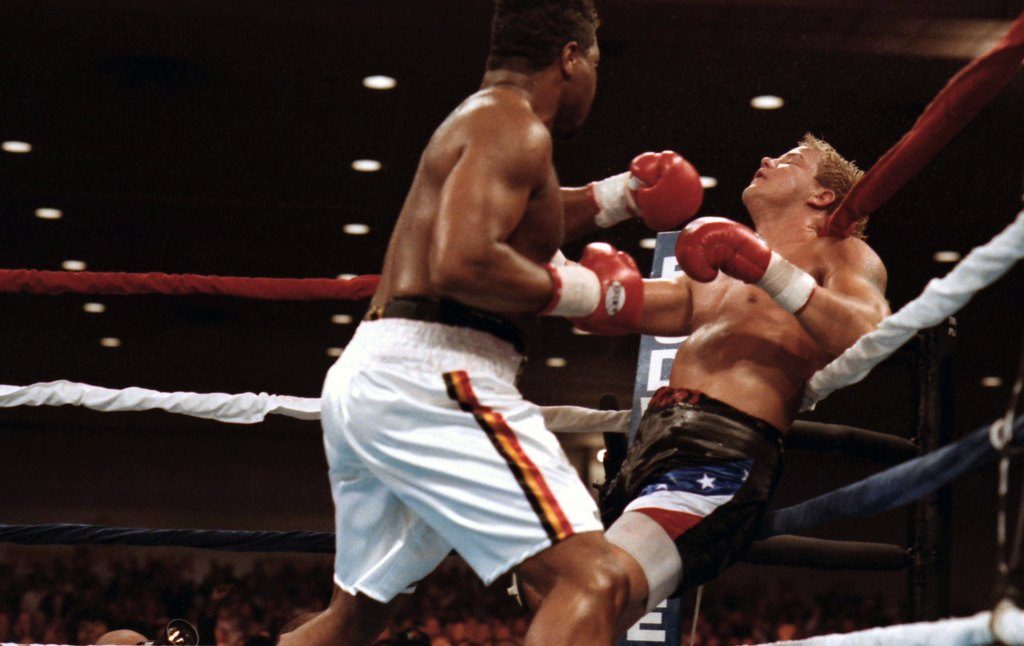 Mercer puts the finishing touches on Tommy Morrison. Photo from The Ring archive

Looking to reposition himself, Mercer was primed for a shot at Bowe but was caught up in a bribery scandal; reportedly asking Jessie Ferguson to take a dive in a fight that he would go on to lose. He was later acquitted, but the incident damaged Mercer’s reputation. He did restore some credibility when he bested Ferguson in a November 1993 rematch.

In May 1995 Mercer faced Evander Holyfield who was now on the comeback trail. He whipped himself into good shape but couldn’t match the skills of the former champion and dropped a hard-fought 10-round unanimous decision.

One year later Mercer faced off against another future great in Lennox Lewis. The two engaged in a brutal back and forth encounter, but it was Lewis who prevailed via 10-round majority decision, much to the  chagrin of many fight fans at Madison Square Garden.

“I felt like I won both of those fights,” Mercer said. “With Lennox Lewis, I know I won that fight. As a matter of fact, I’ve seen him on three different occasions and he’s told me I beat him [laughs]. I told him to send me the rest of my money. We joke about that.

“Evander Holyfield, I know I won seven rounds out of 10. I lost that in the last three rounds. He hit me with the hook and I took a knee, that’s what we were taught to do in the military, because the ones that hurt you are the ones you don’t see. Get your stuff together and get back up. I quit being the aggressor at that point and gave him an advantage. It hurt me on the scorecards, it really did.

“Lennox Lewis was a bigger fight to me. Evander Holyfield was a great fighter, but Lewis was a real heavyweight. It is what it is. I was like a gatekeeper; you beat me and you get a title shot.” 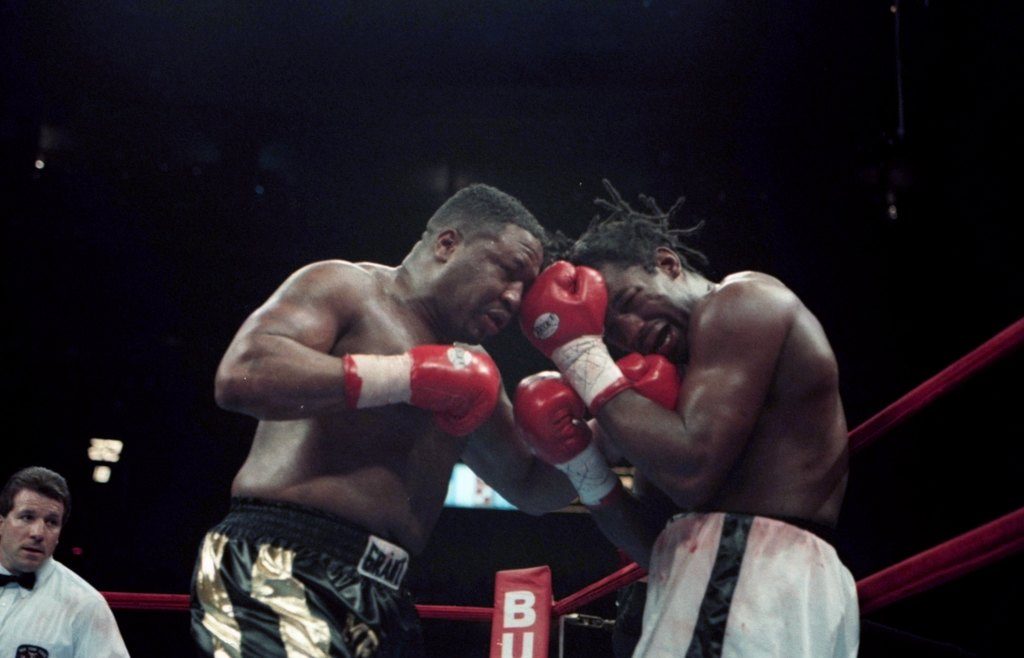 Mercer (left) gave Lewis one of the hardest fights of his career. Photo from The Ring archive

Mercer fought sparingly over the next six years, winning all seven bouts against less than stellar opposition before meeting Wladimir Klitschko for his old WBO title. The bigger, fresher, younger man easily had his way with Mercer and became the first fighter to stop him.

Mercer continued to fight and even took part in some kickboxing and MMA battles with mixed success. He retired in 2008 with a record of (36-7-1, 26 knockouts).

Mercer, now 58, lives in Fayetteville, North Carolina and is married with four children and a grandchild. He makes appearances, goes fishing and likes to spend time with his family.

The former WBO titleholder graciously took time to speak to The Ring about the best he fought in 10 key categories.

BEST JAB
Larry Holmes: I learned how to throw my jab off Larry. He had one of the best jabs in the world, ever. I’ve got to give that to him; his jab was awesome. He used the jab for a lot of things: to hurt you, set up the right hand, he used it well.

BEST DEFENSE
Francesco Damiani: He was a southpaw, he took away my jab, he looked kinda big, he was awkward. This guy could really move and he was a boxer.

FASTEST HANDS
Evander Holyfield: He was just fast. Before you know it the jab is coming back. He was a smaller guy, so he was obviously faster than the big guys.

BEST FOOTWORK
Holyfield: When he threw punches he didn’t just hit and stay there, he was a very smart fighter. He’d hit you and move to the side. He’ll come back with something and move to the other side. He’s real slick on his feet.

BEST CHIN
Bert Cooper: We had fight of the year in 1990. That dude took everything I had and I took everything he had. We both ended up in the hospital. Lennox Lewis and Holyfield took a good shot.

SMARTEST
Lennox Lewis: He knows when to battle and when not to battle. He listens to his trainer, he’s smart in a lot of ways. He gets in there and you think he’s not going to throw this and he does. He hits you with stuff you don’t think you’ll get hit with. He’ll set you up.

STRONGEST
Lewis: We were coming in and bumping into each other. He wasn’t budging and I wasn’t budging. He’s got some slick moves, he’s a big man, everything he did was slick and strong. He was definitely the strongest.

BEST PUNCHER
Wladimir Klitschko: He was a bigger and stronger guy. I really didn’t know him so when he hit me I was like, ‘Damn, where did he come from?’ I was in shape and he was just a powerful dude, his jab and everything, very heavy-handed, more than Lewis.

BEST BOXING SKILLS
Holyfield: Everybody knows he’s got the skills to hit and move, hit and not get hit. He was slick, everything his trainer told him to do he does. He was in a position to punch all the time, that’s one thing that amazes me, you have to have good footwork for that. He knows all the moves, he’ll make you pay for your mistakes. He’s just a natural, he’s got everything, he’s complete, he’s the Real Deal.