Dillian Whyte: ‘I am closing the gap’ on Anthony Joshua 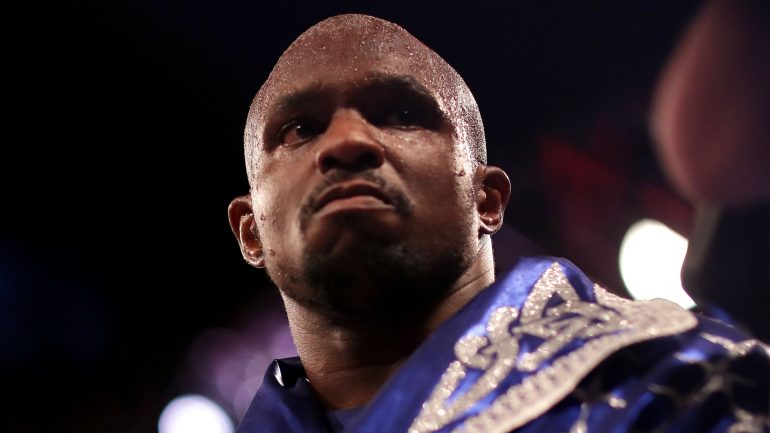 29
May
by Sporting News

Dillian Whyte believes he is closing the gap with Anthony Joshua and would produce a much-improved performance in a rematch with the unified world heavyweight champion.

Whyte is the No. 1 contender for Deontay Wilder’s WBC title, the only belt in the top weight class not held by Joshua, who faces Andy Ruiz in his American debut Saturday.

An expected Joshua victory will likely reignite talk of a bout to determine the undisputed world champion between Joshua and Wilder, the American having delivered a brutal first-round stoppage of Dominic Breazeale in his last bout.

Whyte will keep his No. 1 WBC contender status should he defeat Oscar Rivas on July 20 and is itching for his shot to win a world title.

He was knocked out in the seventh round by Joshua in December 2015, but would take a very different approach were the two Brits to do battle again.

“He has improved, he has changed the landscape, he is the man, at the minute,” Whyte told Sky Sports of Joshua. “He has only one title missing.

“I can fight, I know that. I have imperfections, work to do.

7 weeks to go expect nothing else but a KO, July 20th at the O2. Dm @kevin11_whyte for remaining tickets. I will not be denied. #whyterivas #matchroomboxing @ernestsimmons

“Everyone says, ‘Joshua has only had a few fights.’ I had seven amateur fights and 26 pro fights. When you talk about experience, I am the one that is inexperienced. Look at all the heavyweights, I am the only one.

“But I would fight any one of them and give them all the worst night of their lives.

“I would back [Joshua] up from Round 1. No excuses, but last time I had a different coach. We worked to draw him into the later rounds then try to take over, but I got injured and was in terrible condition.

“Next time I will take the fight to him — I am fitter, better, bigger, stronger.

“I watched a video of our last fight and saw how much smaller my legs and shoulders were. I am bigger now.

“A lot of things that he has been doing for 11 years, I’ve only just cottoned onto. I am closing the gap.”