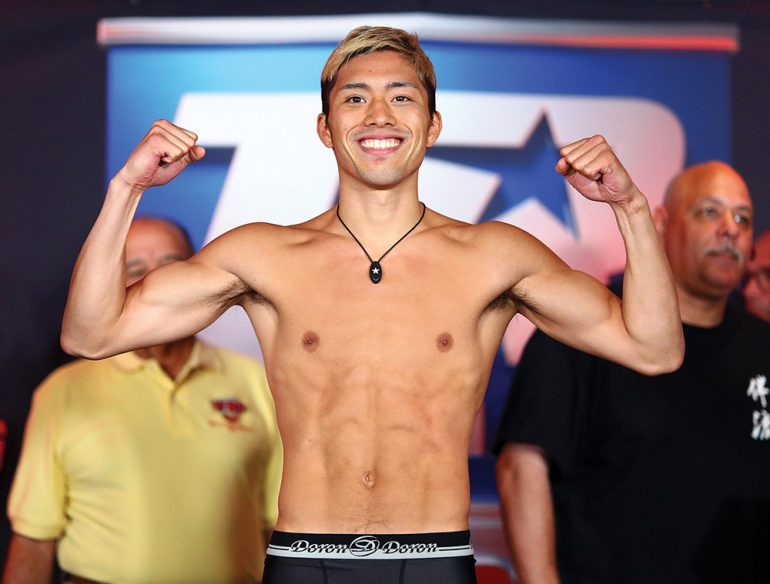 Masayuki Ito is looking to continue his good fortunes and keep his championship momentum going when he returns to Kissimmee, Florida, this time for the second defense of his WBO junior lightweight championship.

Last year the Tokyo local decisioned an undefeated Christopher Diaz in the same city to capture his first major title as a professional. Ito went on to defend his title successfully last December against a tough mandatory, stopping Evgeny Chuprakov in seven.

The card’s promoter Tuto Zabala of All-Star Boxing wanted Ito to return to Florida because, even in the center of America’s southern most state, the fan friendly Ito draws a crowd and can sell some high profile seats to his supporters. If it makes dollars it makes sense to Tuto, who has a great working relationship with Teiken boss Akihiko Honda, and is constantly in Japan. The two had little trouble agreeing that a return to Florida would be profitable.

Top Rank, eager to showcase some of their lesser known talent in Jamel Herring, got behind the fight as well and is airing it on ESPN in what should be a pretty good scrap. Ito gets more American exposure, plus a decent payday for his voluntary defense, while Tuto promotes another successful card in Florida, and Top Rank snags a title shot for their guy. Everybody wins.

The stakes are high for Ito, who can with a win accomplish another dream with the chance at unifying his title as the winner has a better than average likelihood of facing the WBC champion Miguel Berchelt. Berchelt is expected to be ringside Saturday night.

Ring: You’re returning to the place where you won the WBO junior lightweight title. Even though it’s in Florida, do you feel like you have the home field advantage in the fight against the American, Jamel Herring?

Masayuki Ito: I’ve been here once before, so I feel it’s a comfortable environment like being at home. The local fans are all great too, so I appreciate being here.

But I think it doesn’t really matter where I fight because at the fight, there is only referee and the other fighter.

Ring: You have a large contingent of Japanese fans who are expected to follow you all the way to Kissimmee, Florida. How does having that kind of support motivate you?

Ring: You’re expecting a happy addition to your family soon with another child, and already have two daughters as it is. What does having won the title and continuing this momentum mean for you and mean for them?

Ito: Boxing is a job and a dream come true for me. I have a responsibility for my family, and I think I must win. I also want to continue my dream more and more.

Ring: Why do you they call you “The Judge”?

Ito: Rudy [Hernandez, my trainer] gave me the nickname. In Los Angeles, Judge Lance Ito of the O.J. Simpson case was famous. Because I share the same last name as him, it was fitting and so I became “The Judge” because I determine the outcome of my match.

Ring: How was your camp with Rudy? You two have been working together for a while now. What is that partnership like?

Ito: He always thinks about how to win.

He gives me the best answer and always coaches me and pushes me even when the training is hard. I was repeating some fundamentals in addition to my hard training, so I was able to have a really good camp with Rudy and Daisuke this time.

Ring: You have a tough opponent in Jamel Herring. What kind of mindset are you in knowing as the champion, your opponent will bring his very best because the target is on you?

Ito: Herring is a really difficult opponent and I respect him a lot. I think it will be a difficult fight for sure. I’m a champion, but also I’m a challenger in my mind, so I’ll just do my best to be better than Herring.

Ring: Miguel Berchelt, the WBC champion, will be in the crowd watching your fight and hoping for a unification with the winner. Does that add to the pressure or make you more motivated to win this one and get ready for the next one?

Ito: It’s a great motivation having the possibility to compete with the world famous Berchelt. There is no pressure.

I’m only concentrating on this [Herring] fight right now.

Ring: What message do you have for the fans and your opponent?

Ito: To Herring, Let’s make a great fight together.

To the fans: It will definitely be an exciting fight and I‘ll make sure of that.

Please believe I‘m the one whose hand will be risen in the end. I’m ready. Please support me.

A special thanks to Teiken Gym for providing Ito’s responses.