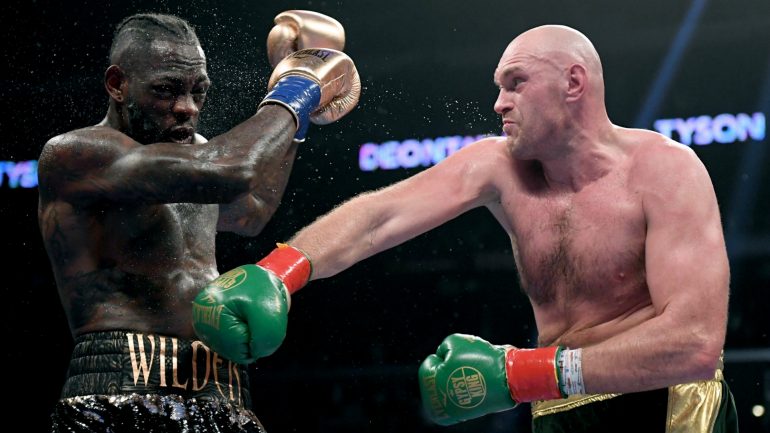 23
May
by Sporting News

A rematch between Tyson Fury and Deontay Wilder is likely to take place in March or April next year, according to the Gypsy King.

Fury and Wilder fought to a thrilling draw in Los Angeles in December, meaning the American held on to his WBC heavyweight title and both men remained undefeated.

The second bout was close to coming to fruition, but that is now not expected until 2020, with Fury set to face Tom Schwarz next month and the WBC champion fresh off an impressive first-round knockout against Dominic Breazeale on Saturday.

“Deontay Wilder cannot run from Tyson Fury forever – the fight has to happen,” Fury said to ESPN, the broadcaster with whom he recently signed a deal.

“This rematch has got to happen, but it won’t be in May, June, July or August. This fight, I’m being told, is likely to happen in March or April next year.

“All of a sudden I had a massive deal from ESPN and they made me an offer I couldn’t refuse. That would’ve been in May I believe.

“Deontay Wilder apparently signed a three-fight deal [with Showtime] before I signed an ESPN deal.

“He signed a deal to fight Dominic Breazeale, Luis Ortiz and Adam Kownacki, so this was all done even before I put pen to paper.”

WBA, IBF and WBO champion Anthony Joshua is also pushing for a fight with Wilder after he has taken on Andy Ruiz at Madison Square Garden on June 1, but Fury believes the Briton is likely to dodge a mega-fight.

Joshua, who has also never been beaten, is signed with DAZN, so all three of the world’s top heavyweights are with different broadcasters in the United States.

Fury said: “If the fighters are willing to fight then why should the networks get in the way?

“But I believe if the fighters really want to fight each other they will, as I proved. I was on BT Sport and came over to the United States and boxed on Showtime.”