Manny Pacquiao: ‘Keith Thurman is the biggest test of my career’ 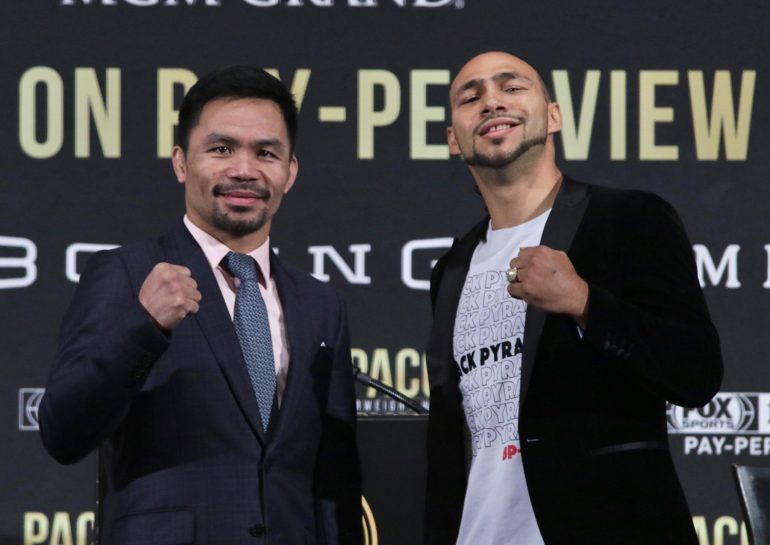 Photo by Jhay Oh Otamias
22
May
by Michael Woods

A glance at social media tells you that fans and observers are pretty much down the middle regarding that July 20 clash between Manny Pacquiao and WBA welterweight titlist Keith Thurman.

The Senator is 40 but has been fighting with a younger man’s verve. People were impressed with his zest against Lucas Matthysse and then he handled Adrien Broner with ease.

Folks figure Thurman will put up a harder battle than Broner. Yes, he didn’t look like an ultra ace in his comebacker, against Josesito Lopez, but, as he told us in the Tuesday presser in New York City to hype the July pay-per-view, you can expect the rust to be shed and for him to look like vintage “One Time.”

Before the Wednesday presser in California, I fired a couple questions to the fighting Senator “Pacman.”

First off, I wondered, how does he see Thurman, on paper, as compared to that illustrious list of pugilists he’s gloved up against since turning pro way back in 1995.

“Keith Thurman is the biggest test of my career,” he told RingTV.com. “It is a once-in-a-lifetime fight in a lifetime of memorable fights. His style reminds me of Miguel Cotto and a little like Ricky Hatton, though Thurman is a lot faster.”

OK…and can he tell us how much longer he might be doing this? Is there a finish line in sight for the man who turns 41 in December? “I still have my speed and power. I am always in good shape,” Pacman stated.

Should beating the Adrien Broners of the world get Manny Pacquiao back into the pound-for-pound rankings given his hall-of-fame resume? Photo by Wendell Alinea/MP Promotions

And do the Pacquiaos have family meetings; does he sit down with the wife and kids and do they all weigh in on his professional future? “I will keep fighting as long as I can maintain an elite level and it remains fun,” the 61-7-2 (with 39 knockouts) credit to the sport shared.