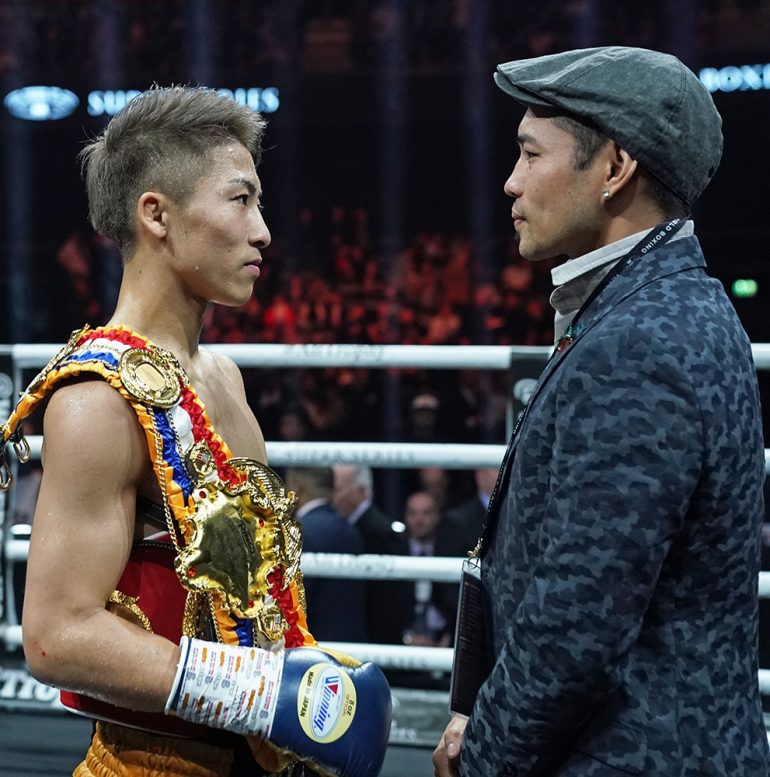 If you weren’t a believer in The Monster, Naoya Inoue, prior to his World Boxing Super Series bantamweight semifinal showdown with fellow unbeaten standout Emmanuel Rodriguez on Saturday in Glasgow, you freakin’ BETTER be now. 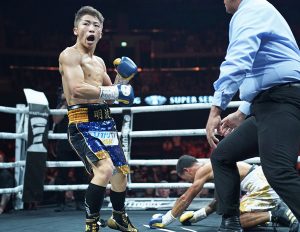 Inoue was devastating vs. Rodriguez. Photo by Naoki Fukuda

After an evenly matched opening round, Inoue (18-0, 16 knockouts) exploded upside Rodriguez’s head with a left hook, dropping the classy (and bigger-looking) Puerto Rican to the canvas. Rodriguez bravely got up – twice – after a body attack follow up sent him back to the mat, nose bleeding, right eye twitching, head shaking in disbelief. But he was no match for Inoue, who blew him out in two rounds, earning at third major title (IBF) in a third weight class at the prime age of 26, and also advancing the WBSS final where he will face future hall of famer Nonito Donaire.

Whenever and wherever that matchup lands, most fans expect to see a passing of the torch, as Inoue is the hardest-punching bantamweight the sport has witnessed since Donaire’s 118-pound prime eight years ago. Since entering the bantamweight division, Inoue, who held major titles at junior flyweight and junior bantamweight, has scored back-to-back opening-round stoppages of Jamie McDonnell (The Ring’s No. 2-rated 118 pounder at the time) and former beltholder Juan Carlos Payano (the magazine’s No. 5-rated contender at the time). His blasting of Payano was The Ring’s 2018 KO of the Year.

Given his body of work, his recent form, and breathtaking stoppage of Rodriguez (19-1, 12 KOs), Inoue made a “Monster” leap from No. 7 to No. 4 in The Ring’s pound-for-pound rankings, and also earned the magazine’s vacant bantamweight title (as he was the No. 1-rated 118 pounder and Rodriguez was No. 3 going into their showdown).

On June 1, Katie Taylor and Delfine Persoon will vie for the inaugural Ring women’s lightweight title with their four-belt unification bout on the Joshua-Ruiz undercard, and later this year the magazine’s vacant 140-pound title will be on the line in the WBSS final between Regis Prograis and Joshua Taylor (The Ring’s Nos. 1 and 2 junior welterweights).

Even with the Usyk-Carlos Takam heavyweight fight dropping from its May 25 date due to Usyk’s biceps injury, the months of April and May have been one of the busiest 60-day stretches in recent memory for Ring Magazine championship bouts. 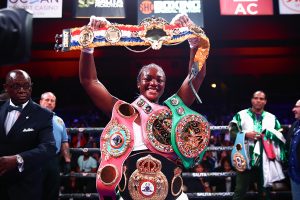 On April 12, unified (WBA/WBO) lightweight champ Lomachenko defended his Ring title by brutally dispatching Anthony Crolla in four rounds in Los Angeles. The next day, in Atlantic City, Shields made history by winning The Ring’s inaugural women’s middleweight championship with a dominant 10-round decision over Christina Hammer in their four-belt unification fight. Two weeks later, on April 26, the magazine’s junior bantamweight title changed hands when Estrada outboxed defending champ Srisaket Sor Rungvisai over 12 brilliant rounds in their rematch, which took place at the same site and city of their thrilling first bout, The Forum in Inglewood, California.

The month of May began with Canelo defending his lineal and Ring champ status with a defensive clinic against Daniel Jacobs. Alvarez, who won a unanimous decision, added Jacobs’ IBF 160-pound title to the WBC and WBA belts that he also owns and defended.

Pound for pound – Inoue advances to No. 4. Canelo remains at No. 3 following his points victory over Jacobs. Juan Francisco Estrada enters at No. 8 following his dcision over Sor Rungvisai, who drops out of the top 10.

The Ratings Panel and Editorial Board debated how far Inoue should climb in the mythical rankings.

“Inoue to No. 5. That power is very, very real, top win. No. 5 almost seems too low, but the others are also top fighters,” said panelist Anson Wainwright. 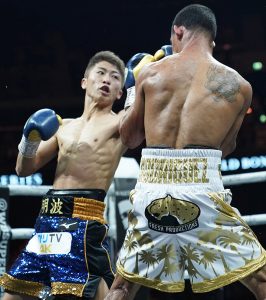 Inoue on the attack vs. Rodriguez. Photo by Naoki Fukuda

“I’d put Inoue No. 1 pound for pound,” said panelist Adam Abramowitz. “I’m not expecting the panel to agree with me, but his resume and present form and the way he has beaten top competition are just as good if not better than anyone else out there.”

“It feels like he should be higher, but Lomachenko, Crawford, Canelo and Usyk have outstanding resumes,” he said. “It would do them a disservice to drop them for Inoue.”

Abramowitz wasn’t having that talk.

“He has knocked out the No. 1 fighter in two divisions,” he retorted, “and just destroyed a good titleholder in a third.”

“Yeah, I considered Inoue for No. 1 on the basis of performance level,” said Associate Editor Tom Gray. “Nobody trounces opposition like that, and Rodriguez is a really good operator.

“However, Loma and Crawford edge him on opposition and Canelo has the best resume in the sport outside of Pacquiao. I feel that he beat GGG last time out and his overall body of work in exceptional.

Heavyweight – Deontay Wilder remains at No. 3 after demolishing unrated Dominic Breazeale in one round to retain his WBC title.

Light heavyweight – Artur Beterbiev advances from No. 6 to No. 4 after stopping Radivoje Kalajdzic in five rounds.

Middleweight – Canelo remains Ring champ. Jacobs remains at No. 2 given his competitive challenge (and the comparatively weak resumes of our Nos. 3-5). Saunders, now campaigning at 168 pounds, exits the rankings. Kamil Szeremeta (19-0), of Poland, enters at No. 10.

Junior middleweight – Julian Williams advances from No. 8 to No. 1 with his thrilling unanimous decision over game but outclassed Jarrett Hurd, who drops to No. 2. Williams won the WBA and IBF titles with his brilliant performance and tremendous effort.

Welterweight – Jessie Vargas drops out (due to a move to the 154-division). Sergey Lipinets enters at No. 10.

Junior welterweight – Josh Taylor (No. 2) and Ivan Baranchyk (No. 5) hold their spots after Taylor outpointed the rugged Russian banger, earning the IBF title and advancing to the WBSS final where he will face Regis Prograis, who lifted WBA belt from Kiryl Relikh in his semi-final bout. Relikh drops from No. 4 to No. 7. Sergei Lipinets drops out (due to a move to 147-pound division). Yves Ulysse (18-1), of Canada, replaces him at No. 8.

Lightweight – Mikey Garcia, now campaigning at 147 pounds, exists the rankings, making room for Ryan Garcia (18-0 and no relation), of the U.S., to enter at No. 10. Robert Easter drops from No. 3 to No. 5 after his mind-numbing draw with unrated Rances Barthelemy (who remains unrated). 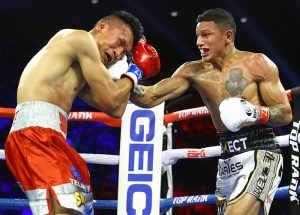 Berchelt lands an uppercut against Vargas during their rematch. Photo by Mikey Williams-TOP RANK

Some panelists wanted Vargas, who has been through the proverbial ringer and may well be shopworn at this point, to drop from the rankings. Others were against that move.

“I don’t like seeing ‘El Bandido’ Vargas drop so low after such a gutsy career, but I guess his time has passed,” stated Diego Morilla. “I’d keep him at No. 9 just out of respect for all of those Fight-of-the-Year and Round-of-the-Year performances, just for the other guys to know that it takes that kind of effort to be in the Top 10. Just a thought.”

Featherweight – Gary Russell Jr. holds his No. 3 spot following an easy WBC title defense against Kiko Martinez. Scott Quigg drops out (due to a move to the 130-pound). Shakur Stevenson (11-0), of the U.S., enters at No. 10.

Some panelists wanted to move Russell up a notch. Others weren’t feeling that opinion.

“Russell is wonderful talented but woefully inactive,” said Wainwright. “To me he’s the best 126-pounder in the world just not active enough. I’d move him up to at least No. 2 but understand the reasoning for not pushing him.” 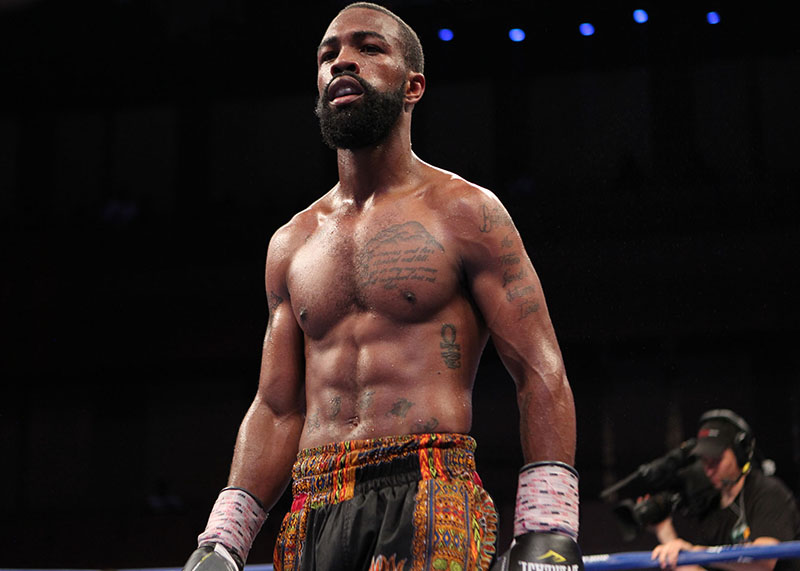 Quipped new panelist Tris Dixon: “I’m in no hurry to push Russell until he’s in a hurry to fight someone relevant.”

Montero was in favor of an advancement but couldn’t lobby hard given Russell’s once-a-year fight schedule.

“I’m good with moving Russell to No. 2 above Josh Warrington, who went the distance a couple years back with the same Kiko Martinez that Russell blew out (Saturday) night,” he said. “We’re gonna get criticism from the UK fans if we (move Russell up), though. Warrington has fought 10 times since 2015 compared to Russell’s five.”

Said Mulcahey: “Russell Jr. made his annual appearance, probably won’t see him again until 2020. Warrington’s win over Carl Frampton is still a better win than anyone Russell has beaten, in my opinion, so he stays put despite my thinking he beats Warrington head-to-head.”

Junior featherweight – Danny Roman advances from No. 4 to No. 1 with is thrilling WBA-IBF title unification majority decision over TJ Doheny, who remains at No. 6. WBO beltholder Emanuel Navarrete advances to No. 3 with his brutal rematch stoppage of Isaac Dogboe, who drops to No. 9.

“Naoya Inoue’s performance legitimized our decision to sanction his bout with Rodriguez for the Ring title,” Montero said. “A fighter that special needs to be crowned.”

Junior bantamweight – Estrada is the new Ring champ. Sor Rungvisai drops to No. 1. Jerwin Ancajas advances from No. 5 to No. 4 following his IBF title defense against unrated Ryuichi Funai.

Flyweight – Moruti Mthalane remains at the No. 2 spot after a competitive unanimous decision over No. 9-rated Masayuki Kuroda.

Junior flyweight – Felix Alvarado advances from No. 5 to No. 3 after defending his IBF title (via clear UD) against No. 9-rated Reiya Konishi.