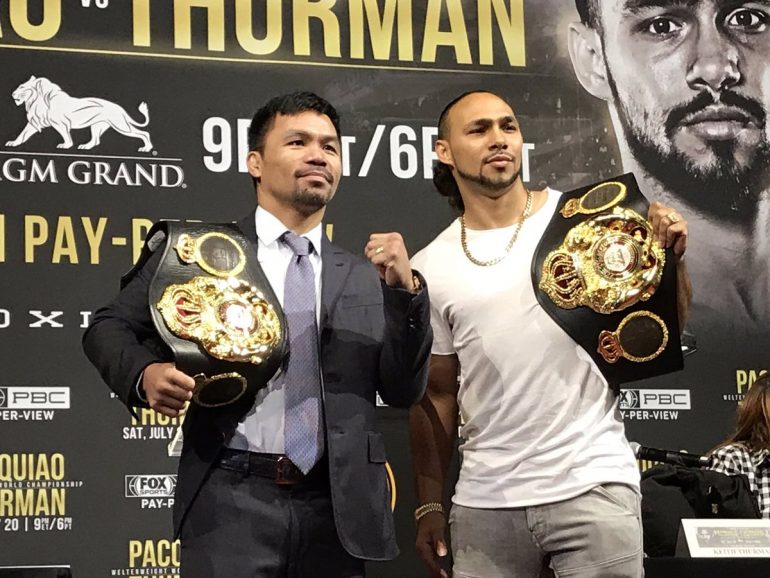 NEW YORK — It isn’t often that Manny Pacquiao goes back and forth talking trash with an opponent, but things run differently ever since he jumped ship to Premier Boxing Champions.

The Filipino legend met face to face in New York on Tuesday with Keith Thurman, the unbeaten WBA welterweight titleholder whom he’ll meet in the ring on July 20 at MGM Grand in Las Vegas. It’s the latest in a long string of pay-per-view headliners for Pacquiao, but it’s the first time for “One Time” Thurman, a hard-punching banger from Clearwater, Fla., who delivers promises with the cadence of an ’80s pro wrestler.

His excitement at fighting someone he describes as a legend was clear, as he walked to the stage showing lots of energy, singing along to an Archie Eversole song, ad-libbing “We ready for Pacquiao” at the hook.

“I believe that boxing has come to a new era. Floyd [Mayweather] is gone, Pacquiao is here. Come July 20th, he will disappear. They announced him as a senator, he belongs as a senator in the Philippines. With all respect, he’s a legend, he’ll always be remembered in the sport, but I’m doing to Manny Pacquiao what he did to Oscar de la Hoya,” said Thurman (29-0, 22 knockouts), referring to the 2008 fight where Pacquiao overwhelmed and retired the sport’s Golden Boy.

Pacquiao, an eight division champion who is ten years older at 40, smiled back at him, a smile he says means “you don’t know me.”

Pacquiao (61-7-2, 39 KOs) doesn’t get much direct confrontation at his day job in the Philippine Senate but warmed to the task when asked about Thurman’s promise to put him to sleep.

“I’m a kind of fighter that I don’t talk too much. No trash talk but I do in the ring a lot of things. Because you said that, let’s prove it in the ring on July 20. You will see a warrior Manny Pacquiao in the ring this July 20 because of all he says. Let’s prove it, and I will show you how it is like to be in the ring with me on July 20. That’s a guarantee,” said Pacquiao.

Pacquiao was accompanied by MP Promotions matchmaker Sean Gibbons and head trainer Buboy Fernandez, who followed his best friend Pacquiao into politics and was recently elected vice mayor of Polangui town in Albay province. Fernandez didn’t speak and was bundled up in a hoodie due to a sore throat. Freddie Roach, Pacquiao’s former head trainer and now assistant, wasn’t at the kickoff press conference but is expected to be at Wednesday’s second tour date in Beverly Hills.

While Pacquiao has nothing left to prove, outside of settling a score with the now-retired Floyd Mayweather Jr., Thurman has plenty to prove. He’s held a version of the WBA title for most of the decade but has found it hard building momentum due to inactivity. He hasn’t fought multiple times in the same calendar year since 2015, and sat out nearly two years following his unification win over Danny Garcia with elbow and hand injuries.

His most recent fight, a majority decision over Josesito Lopez in January, started off strong with a left hook knockdown in round two, but Thurman was dazed in round 7 by an onslaught that included Thurman having his head knocked back from a right hand.

Thurman said he had only done conditioning work by himself at LA Fitness for the Lopez fight, but says he’s hired two conditioning coaches to help him this time. Thurman has long been trained by Dan Birmingham, but gave mention to the late Ben Getty, the trainer who first put gloves on him at age 7.

“Like Manny said, trash talk doesn’t mean nothing, but when he’s on that mat and he’s catching that nite-nite on the 20th, it’s really gonna mean something. And on the 21st, I guarantee he’s not gonna see a rematch even though it’s in the contract,” said Thurman.

Pacquiao was dominant in his last fight against Adrien Broner in January, stunning the faded American and winning a unanimous decision. Thurman knocked the outing, saying “he wasn’t in a real fight” and “you didn’t get hit in your face.”

Pacquiao countered back that the reason he didn’t get hit was because of his defense, and not the caliber of opposition.

Betting odds opened up with Pacquiao as a slight +120 underdog while Thurman is favored at -140, a situation Pacquiao hasn’t seen since his 2015 fight against Floyd Mayweather. He says it motivates him to prepare better, since he understands the danger that his opponent represents.

“I’ve been in boxing for two decades. I’m never scared or intimidated with my opponent and I’m so excited for this fight because I’m fighting an undefeated [fighter]. Keith Thurman is the kind of fighter you cannot underestimate,” said Pacquiao.

“I will not predict this fight but I will make sure I’m 100% conditioned and ready for the fight. Let’s see who is tougher on the ring on July 20. I like that I’m an underdog for this fight, this gives me more motivation and encouragement to focus on this fight. This is what I want, sometimes I became careless and confident because I’m so favored in every fight but this time around it’s different.”

When they concluded their Q&A session, the two fighters stared face to face, with Pacquiao saying that Thurman told him “let’s give a good fight.”

Setting aside Thurman’s insistence that this will be Pacquiao’s final bout, Pacquiao says he has a “couple of fights” left in him, and mentioned Errol Spence, the undefeated IBF welterweight titleholder and fellow PBC boxer seen by many as the leading figure at 147 pounds,  as someone he’d like to face in those fights he has remaining. “One at a time, let’s get through this fight first,” said Pacquiao.

And what about Mayweather, who defeated Pacquiao by unanimous decision in their long overdue fight which broke financial records? He’s retired, and the 42-year-old has given no indication that will be changing any time soon. How about if Pacquiao wins impressively against Thurman, could that change matters?

“I don’t think so, he will be scared more,” Pacquiao said before cracking a smile.