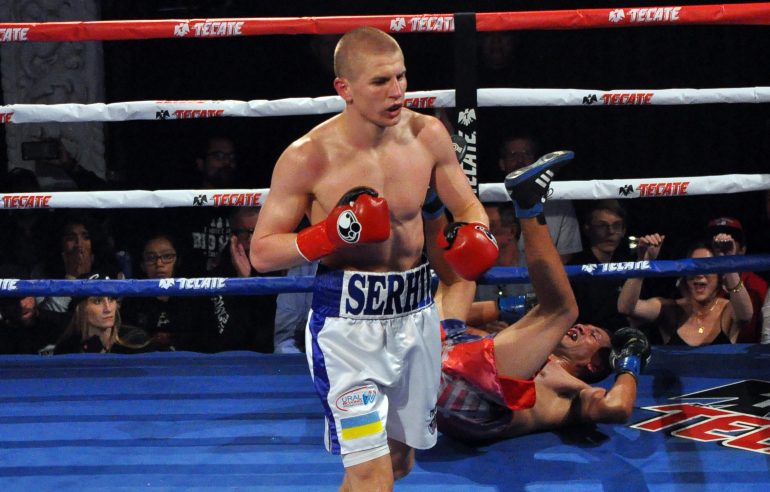 Bohachuk has won all of his bouts by stoppage. Photo by German Villasenor
19
May
by Francisco Salazar

Another fight, another knockout victory for Serhii Bohachuk.

The unbeaten junior middleweight notched another impressive victory Sunday night, this time at the expense of former welterweight contender Freddy Hernandez in round five at The Avalon in Hollywood, California.

Bohachuk improves to 14-0, with all of his wins coming by knockout.

The 24-year-old Bohachuk, who is originally from the Ukraine and now resides in Big Bear Lake, California, last fought on Mar. 24, stopping Cleotis ‘Mookie’ Pendarvis after the third round. The 40-year-old Hernandez figured to give Bohachuk a stern test, despite having lost his last two fights and having seen his best days behind him.

It was a tactical fight from the opening bell between the two fighters, but Bohachuk landed the more telling blows. Bohachuk dropped Hernandez midway through the second round, landing a counter right hand to the head. Hernandez was not visibly hurt and fought on after getting up from the canvas.

As the bout progressed, Bohachuk’s youth and aggression began to take its toll on Hernandez, who looked sluggish and a step slower than Bohachuk. Hernandez stood in the pocket with Bohachuk but was receiving punishment and had to deal with a cut that opened over his left eye in round three.

Midway through the fifth round, Bohachuk pinned Hernandez against the ropes, ripping and connecting with a right uppercut to the chin, followed by a right to the body. Moments later, a left hook to the stomach dropped Hernandez to the canvas. Hernandez beat the count, but referee Wayne Hedgpeth stopped the fight at 1:40.

“I was just boxing and doing my job,” said Bohachuk, who is trained by Abel Sanchez. “Freddie is a tough and great fighter. He is my toughest opponent.” 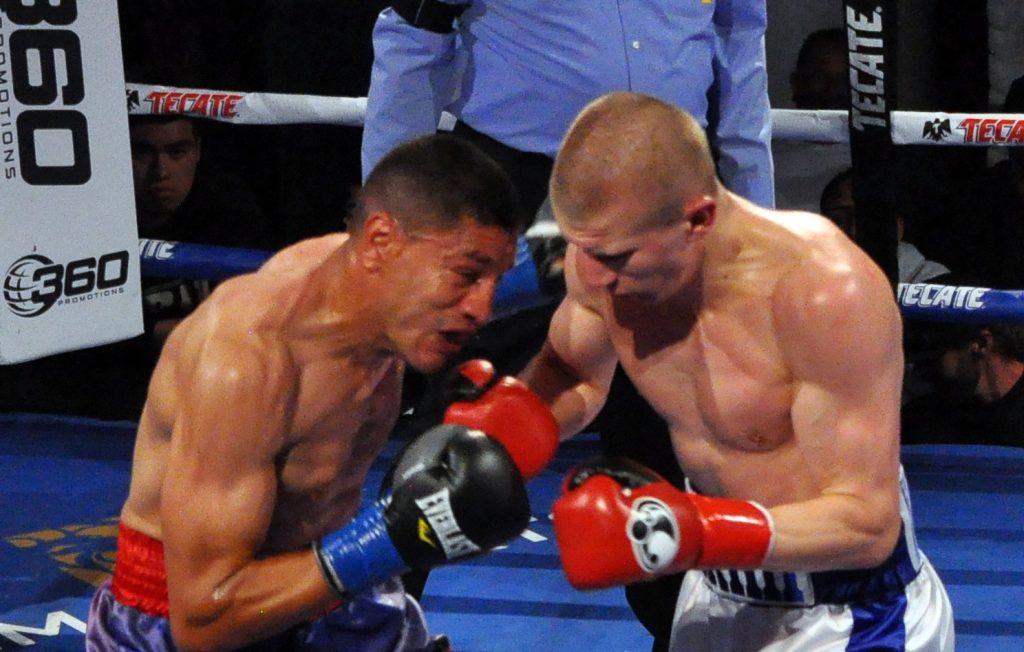 Bohachuk has received high praise from promoter Tom Loeffler as well as scribes and diehard boxing fans. He believes fights against the likes of Hernandez will serve him well in the long run.

“It was not an easy fight. This was good experience for me.”

Hernandez (34-11, 22 KOs), who is originally from Mexico City and now resides in the Los Angeles area, announced after the fight that he was retiring from boxing. He praised Bohachuk on his performance.

“(Bohachuk) is a young, strong fighter,” said Hernandez, who began his pro career in February 2001. “He surprised me as I came to fight and win. He confused me as he went to the head, but then attacked my body. He punishes both the head and body.”

Unbeaten bantamweight George Navarro knocked out Cesar Sustaita with one punch in the opening round of a scheduled six-round bout.

Navarro (6-0-1, 3 KOs) landed an overhand right to the chin, dropping Sustaita (3-5, 3 KOs) to the canvas. Sustaita struggled to get up, prompting referee Raul Caiz, Jr. to immediately stop the fight.

Junior lightweight Adrian Corona remained unbeaten, defeating Canton Miller by split-decision over six rounds. Both fighters had their moments throughout the fight. Corona was effective boxing from distance, as Miller pressed the action, landing the harder punches.

In a clash of Southern California junior featherweights, Humberto Rubalcava (10-1, 7 KOs) stopped Daniel Constantino (3-3-2, 1 KO) at 1:36 of the opening round.

The 10-round super middleweight bout between unbeaten Alem Begic and Benjamin Simon, both of whom reside in Germany, was postponed when Simon reportedly did not show up at Saturday’s weigh-in due to a managerial issue.