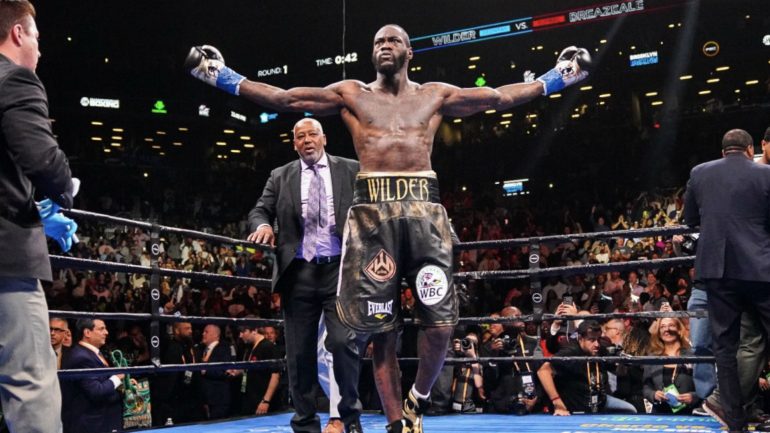 19
May
by Sporting News

Deontay Wilder’s first-round obliteration of Dominic Breazeale in their Showtime main-event showdown at Barclays Center in Brooklyn sent social media into a frenzy Saturday night. Not only was the finish one of the most violent things you’ll see this year, it also threw gasoline on the heavyweight division fire as fans clamor for Wilder, Anthony Joshua and Tyson Fury to eventually face one another.

The buzz will only be heightened when Joshua and Fury return to action next month. Joshua will make his U.S. debut at Madison Square Garden against Andy Ruiz Jr. on June 1; Fury will head to Las Vegas to face Tom Schwarz on June 15.

Join DAZN to watch Joshua vs. Ruiz on June 1

Wilder, the WBC champion, drew first blood in this divisional battle with his brutal KO of Breazeale. The Bronze Bomber not only made a big statement in the Big Apple this weekend, he also set the pace as Joshua and Fury get ready to handle their business.

Here’s what we learned from Wilder’s 40th knockout in 42 fights:

1. Deontay Wilder is a star.

It took a long time to get there (about 40 fights), but Wilder has become must-watch television. He also is the biggest enigma in boxing, as evidenced by his nuclear knockout of Breazeale. Coming off a draw with Fury on Dec. 1, Wilder needed to do something to keep fans’ interest after not landing an expected rematch with The Gypsy King. Breazeale wasn’t the fight people wanted, but Wilder’s prefight antics —punctuated by suggesting legalized homicide — kept them engaged. Wilder’s words and the anger the fighters have felt for each other since 2017 made this bout an explosive showdown and one that went from ho-hum to one that compelled people to tune in and see what might happen.

Instead of wasting time, Wilder detonated a vicious bomb on his rival’s chin late in Round 1 and made good on his promise to sink Breazeale’s battleship.

The Bronze Bomber left no stone unturned before and after this fight. He capitalized on the “‘Til this day” catchphrase he made famous ahead of his fight with Fury, kept it entertaining during his media rounds and delivered a confident promo after the KO. Wilder has turned into arguably the most intriguing heavyweight since Mike Tyson.

There’s no doubt that when Wilder fights, we’re all watching.

2. We’re no closer to Wilder-Fury 2 or Wilder-Joshua.

What we want next isn’t going to happen, and that was made obvious during the postfight interview when Luis Ortiz stepped into the ring to challenge Wilder to a rematch of their entertaining 2018 fight in which Wilder stopped the Cuban in the 10th round. With network and promotional politics in the way, fights with Fury (Top Rank/ESPN) and Joshua (Matchroom/DAZN) won’t happen next.

Wilder’s manager, Shelly Finkel, suggested that he’ll meet with DAZN chairman John Skipper next week to begin negotiating for a Wilder-Joshua fight. Don’t believe the hype; that was lip service. A deal absolutely won’t be finalized before Joshua takes on Ruiz.

If things shake out the way we expect, Wilder will face Ortiz before the end of the year and then take on Polish slugger Adam Kownacki in early 2020. That leaves us with mid- to late 2020 being the first possible date for a fight with Joshua or Fury.

3. There’s Wilder, Fury, Joshua and nobody else.

The heavyweight division may be as exciting as it has been in years, but it is also a three horse-race, and the gap between the top three and everyone else is growing wider by the day.

Breazeale has been good enough to beat everyone but Joshua and Wilder, who both put him out to pasture inside the distance. Fury’s only real test has been against Wilder, and the same can be said for Wilder with Fury. Joshua’s toughest test has been the now-retired Wladimir Klitschko, whom Joshua emphatically knocked out in 2017 to claim the WBA (Super) and IBO heavyweight titles.

The second tier (Ortiz, Dillian Whyte and Alexander Povetkin) and third tier (Kownacki, Joseph Parker, Kubrat Pulev and Oscar Rivas) of heavyweights either aren’t ready or have already tasted defeat at the hands of one of the division’s big three. With politics once more in the way, the likely scenario will be the second and third tiers jockeying for position to lose to those top dogs. Wilder’s path is the most obvious (Ortiz and Kownacki), but Joshua and Fury’s aren’t quite as clear. It’s possible that Joshua will go back to Wembley Stadium in London to fight the winner of Whyte vs. Rivas this fall, and it’s likely that Fury will see Pulev after Schwarz.

Fortunately for fans, the other heavyweights have had their share of exciting fights and won’t just lie down should they get to challenge one of the champions. All of that will lead to exciting fights, but there’s little doubt that the three sitting atop the division now will still be there at this point next year.

Fans won’t be satisfied until Fury, Wilder and Joshua are scheduled to face one another, but there won’t be a full-blown mutiny while we wait. As a matter of fact, with Wilder’s star growing, Fury re-entering fight fans’ consciousness and Joshua establishing himself stateside, the wait will only make these fights grow bigger in stature.