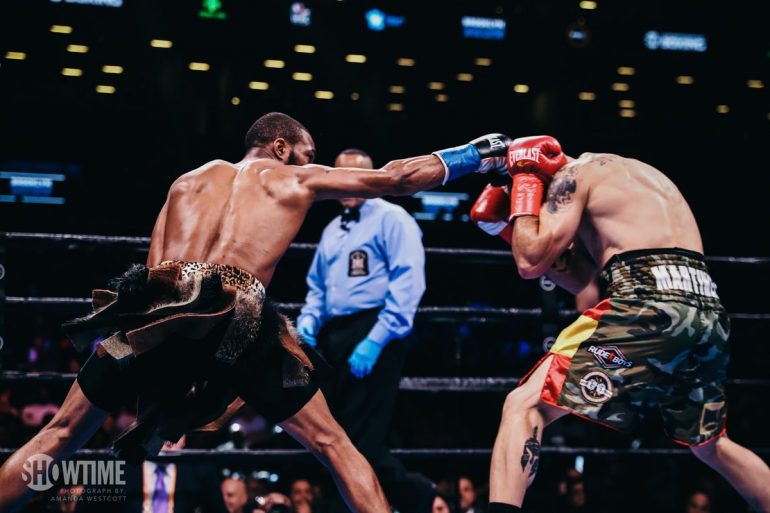 Photo by Amanda Westcott/Showtime
18
May
by Joseph Santoliquito

NEW YORK — Gary Russell Jr. was omnipresent Saturday night at Barclays Center. It was almost as if Russell forced anyone who saw him to rub their eyes trying to convince themselves Russell didn’t split himself into three.

The WBC featherweight champion worked the corners of his brothers, Gary Antonio Russell and Gary Antuanne Russell, the former U.S. Olympian, then had to get ready for his own title defense later in the evening on the Deontay Wilder-Dominic Breazeale undercard.

There were times Kiko Martinez (39-9-2, 28 knockouts) may have thought he was fighting three Gary Russell Jrs., who was making his fourth title defense.

Fighting for the first time in a year, Russell chopped up Martinez over five rounds, before the fight was stopped at 2:52 of the fifth due to a severe cut over Martinez’s left eye.

“I did pretty well,” Russell said. “We stayed behind the jab and he couldn’t get past it.  We knew that intellect over athleticism would get it done.

“We want (WBA Featherweight Champion) Leo Santa Cruz. We want to make this fight happen.  The fire is all the way hot on this side of the field. You will get burned. I would love for that fight to happen this year. Let’s make it happen.”

Russell, a southpaw, ruled the first two rounds. He bounced a fusillade of shots on Martinez’s head. Even though it was the first time Russell fought in a year, you couldn’t tell, by the way Russell was exerting his hand speed and precise combination punching.

In the third, Russell (30-1, 18 KOs) once again landed a heavy left off the side of Martinez’s head. By the end of the third, a cut began opening over Martinez’s left eye. Martinez was able to get a few shots in, one a left hook to the body in the last minute of the third.

Otherwise, Martinez was able to do little against Russell.

At the outset of the fourth, Russell caught Martinez leaning in and off balance.

With 1:08 left in the fourth, Russell cleaved Martinez’s defense with a right uppercut to the face. Martinez tried burrowing in with his head down and often found Russell wasn’t there, sidestepping the former IBF junior featherweight champ.

Relaxed and feeling confident, Russell began the fifth using his effective jab as a range finder, and in keeping a good distance between the two fighters. Martinez couldn’t get off more than one punch at a time against the swifter Russell.

Martinez kept coming forward, and each time, he paid a hefty price. With :07 left in the fifth, referee Ricky Gonzalez waved Martinez to his corner, blood flowing from his left eye. Gonzalez, on the advice of the ringside doctor, ended it at 2:52.