Gray Matter: Deontay Wilder wants a body on his record… and needs tape over his mouth 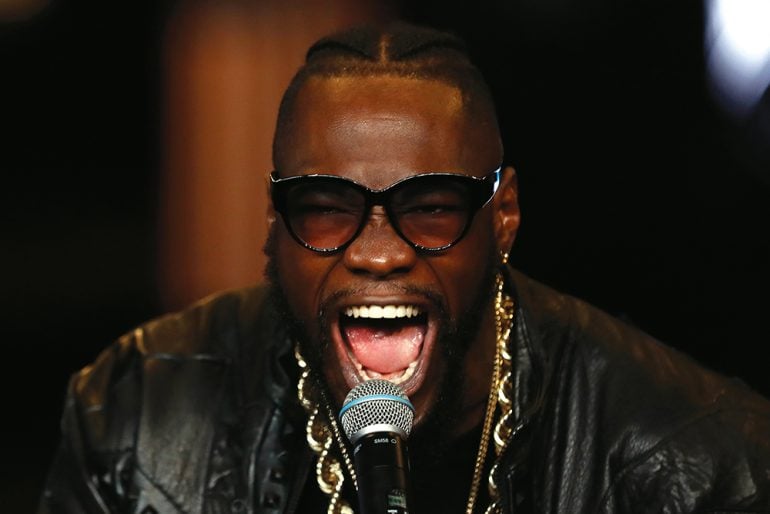 Nothing is sacred and anything is defendable. Finding a way to go against the grain on highly controversial topics is a way to be noticed, to feel smarter than what you really are, damn the non-existent consequences. I see it time and again, inside and outside of boxing. There’s no serious deterrent, no price to pay. You can talk as much garbage as you like.

The most recent example in the boxing world is the reaction to WBC heavyweight titleholder Deontay Wilder saying, “I’m still trying to get me a body on my record!”

First up, I’ve been around death in this sport. During a time when I was keeping fit at Forgewood Amateur Boxing Club in Motherwell, Scotland during the mid-1990s, I vividly recall the devastation that the death of James Murray, a Scottish bantamweight, had on the club’s members. In October 1995, Murray, who lived locally, was knocked out in the 12th and final round of a British title fight by countryman Drew Docherty. A horrible riot ensued, Murray never woke up, Docherty was never the same, families were torn to pieces.

Over 20 years later, I sat at a bar questioning the way I made a living after Scottish welterweight Mike Towell died following a bout with Dale Evans in September 2016. Tears in my eyes, I literally felt sick to my stomach because Towell had a young son, just like myself, and I imagined my own family having to move on without me.

Chloe Ross, Towell’s girlfriend and the mother of his son, was absolutely aghast by Wilder’s comments and her wounds have been needlessly re-opened.

In the past, I’ve also spoken to former featherweight champion Barry McGuigan about his experiences regarding ring fatalities and heard his voice crack decades after the event. Young Ali, McGuigan’s opponent, passed away five months after a sixth-round knockout left him in a coma in June 1982.

Now, don’t get me wrong, no one has directly came out and endorsed Wilder’s comments, but some of the drivel being spouted on social media is bordering on lunacy. Let’s examine the three most popular lines:

Wilder’s comments are being blown out of proportion
I’ll keep this short. It’s easy to be on the outside and say that, it’s easy to be flippant when you’ve never been directly involved in a ring fatality. Put yourself in the shoes of all the people who have lost a loved one to boxing. Think!

Wilder is seeking attention and indulging in self-promotion
“The Bronze Bomber” is aligned with PBC and Showtime and they have more than a few dollars kicking around. If Wilder is craving attention so badly, then it might be a good idea for him to touch base with his team. We’re talking about an unbeaten 6-foot-7-inch knockout artist with a big mouth and a green belt. Surely there’s enough scope there to get this guy some copy.

But Mike Tyson talked about killing people
First, if you told Tyson that he was being used as the moral compass in this argument, he would be the first one to slap the taste out of your mouth. The former two-time heavyweight champion exhibited behaviors that were reprehensible during his zenith and he carries plenty of regret. Tyson has reinvented himself countless times since that period, and forgiveness, from many parties, has taken a very long time. He talked about killing Razor Ruddock in 1991. He talked about eating Lennox Lewis’ children in 2000. That was 20-30 years ago for God sake. Time is a great healer and this is a different world now. We’re in the social media age and an athlete’s words travel a lot further and carry much greater influence than they once did, particularly among the younger generation.

Simply put, if you show, or pretend to show, any level of understanding in relation to Wilder’s comments, if you draw any comparisons to suit this narrative, then you have all the brains that God gave a goose.

Those words have hurt people a lot worse than a punch ever could.