Photos: Deontay Wilder, Dominic Breazeale on the scales in Brooklyn 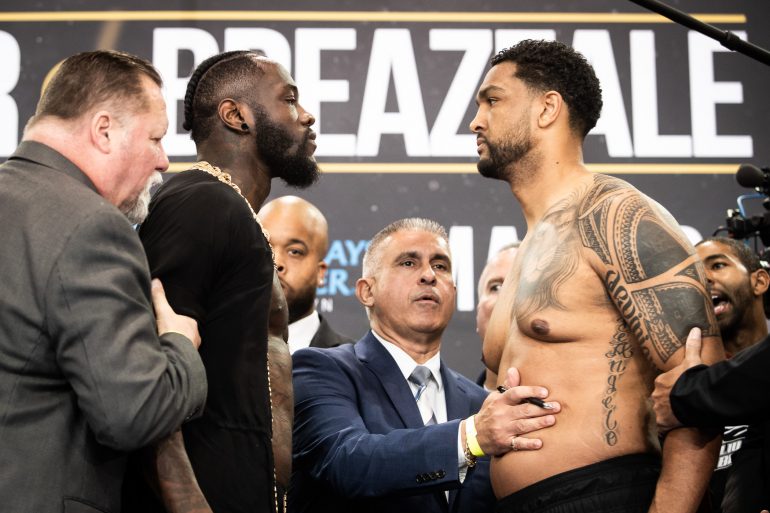 Photo by Amanda Westcott/Showtime
17
May
by Ryan Songalia

If pre-fight weights mean anything, Deontay Wilder probably isn’t counting on doing a lot of moving.

The WBC heavyweight titleholder weighed 223 1/4 pounds, more than eleven pounds over what he weighed in his last fight against Tyson Fury, and the most he has weighed in three years. Dominic Breazeale, traditionally the heavier man, checked in at 255 1/4, just below what he weighed against Carlos Negron last December.

The fight will be Wilder’s ninth title defense, and takes place Saturday at Barclays Center in Brooklyn, live on Showtime Championship Boxing. 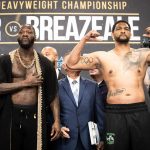 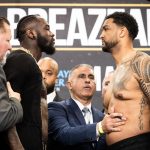 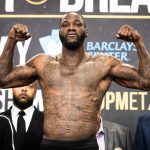 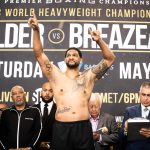 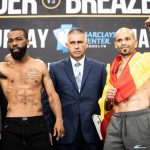 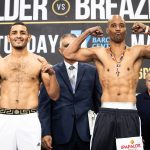 “Tomorrow is judgment day,” said Wilder (40-0-1, 39 knockouts). “The bad blood is not going to affect the fight at all, it will only intensify it. When we get into the ring we are both going to see red. That’s what makes great fights – the words that we speak and what we do in the ring.”

Breazeale (20-1, 18 KOs) is the mandatory challenger for the WBC belt and is getting his second shot at a world title after losing in seven rounds to Anthony Joshua in 2016.

“I think the bad blood motivated me during camp,” said Breazeale. “Coming into the fight though I’m going to act like a professional and put a professional performance on and give the fans what they want to see and get that knockout win.

(READ: Deontay Wilder says you can keep the fame, he’s out for ‘generational wealth’)

“I’m going to put some leather in his face as often as possible. I plan on landing some big right hands and following up with some great body shots and left hooks. But on fight night, it’s about whoever lands to big shots first.”

The referee will be Harvey Dock, and all three judges – John McKaie, Waleska Roldan, and Tom Schreck – are from New York.