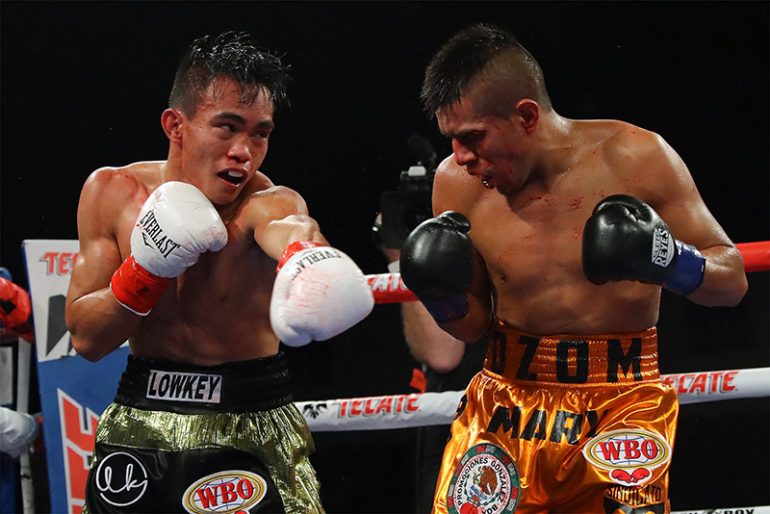 With the victory, Duno improves to 20-1, 15 knockouts, earning the NABO regional title and a top-10 ranking by the WBO.

The win over Rodriguez was a redemption of sort for Duno, who vowed to defeat Rodriguez after the fighter from Puebla, Mexico stopped former lightweight contender and Filipino-American Mercito Gesta on March 21.

Duno, who resides in General Santos City in the Philippines, which is also the hometown of Manny Pacquiao, initiated exchanges from the opening bell that allowed him to beat Rodriguez to the punch.

Undaunted, the veteran southpaw walked Duno down beginning in round three. The tactic worked as Rodriguez landed the more-telling punches, particularly when both fighters exchanges combinations in the pocket.

Both had their moments during the middle rounds. Rodriguez continued to connect with combinations, especially in round six, when a punch to the head momentarily stunned Duno. 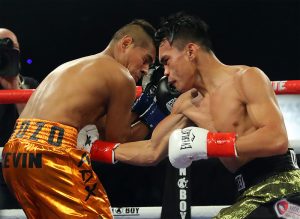 Duno lands to Rogriguez’s body (this one was on the beltline). Photo by Tom Hogan

Duno dug himself a hole in round seven when he was deducted a point from referee Raul Caiz Sr. for landing a low blow. Replays showed the punch was borderline on Rodriguez’s belt-line.

Just when it looked like Rodriguez had the upper hand, a left hook from Duno to the body dropped Rodriguez to one knee. Rodriguez barely beat the count, but fought on despite the punch weakening his legs.

The end of the fight came at 30 seconds of round nine. Caiz stopped the fight after examining Rodriguez’s bruised and bloody face and determining a cut, that was opened from an accidental clash of heads, was too deep to allow Rodriguez to continue.

“He fights tough and he’s strong,” said Duno, who trains at the famed Wild Card gym in Hollywood, California.

Robles, who is the son of trainer Manny Robles, had not fought since defeating Jose Santos Gonzalez by split-decision six months ago. After the fight, the 24-year-old Robles vowed to perform better in the ring, and Hermosillo looked like the perfect opponent. Hermosillo had faced less-than-average opposition, with three fighters having winning records entering the Robles fight.

It looked like it would be a short night for Robles about a minute into the opening round, as he dropped Hermosillo with a left-right combination to the head. Hermosillo was not visibly hurt from the knockdown and continued fighting on. 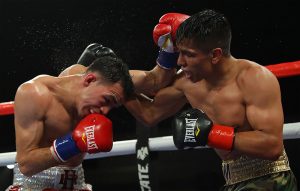 Manny Robles and Rigoberto Hermosillo go at it during their 10-round battle. Photo by Tom Hogan

Robles was the more-effective fighter during the first half of the fight, connecting to the head and body of the southpaw Hermosillo, all the while keeping his distance. As the bout progressed into the second half of the fight, Hemosillo closed the distance between the two fighters. Hermosillo landed several lead and counter left hands to the head of Robles, who attempted to counter Hermosillo’s offense with counter right hands.

Both fighters had their moments during the final two rounds of the fight, but Robles connected with the more-telling blows in the final round.

“I tip my hat off to the him,” said Robles after the fight. “He’s a tough guy and he came to fight.” 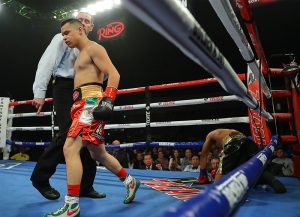 In junior welterweight action, Genaro Gamez returned to the ring from a 13-month layoff, knocking out Mexico City’s Daniel Evangelista (20-10-2, 16 KOs) at 2:43 of the opening round.

Former junior lightweight contender Carlos Morales battered Pedro Navarrete (30-24-3, 19 KOs) before the fight was stopped by referee Raul Caiz, Sr. at 2:02 of the fifth round.

Featherweight gatekeeper Diuhl Olguin of Mexico defeated Tenochtitlan Nava (7-2, 1 KO) by majority decision over six rounds. One judge scored the bout 57-57, while the other two judges scored the bout 59-55 and 58-56 for Olguin, who improves to 14-12-3, 9 KOs.

In the opening bout of the Golden Boy Promotions card, welterweight Joshua Anton was successful in his pro debut, knocking out Lashawn Alcocks (1-6) at 53 seconds of the second round.