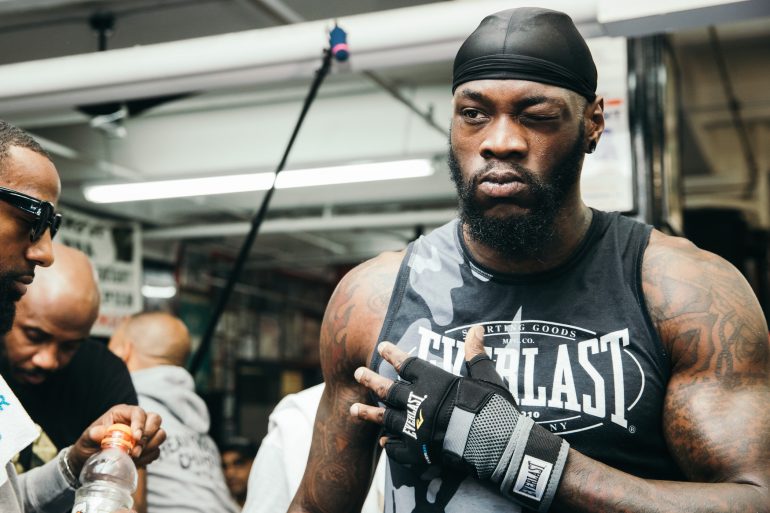 Photo by Amanda Westcott/SHOWTIME
14
May
by Michael Woods |

It isn’t that only KOs float peoples’ boats. You all saw that Julian Williams and Jarrett Hurd’s bout didn’t end in a stoppage and days later, people are still talking about it.

But it’s more so this…People want to see fighters FIGHTING..and by that, I mean, investing in their shots, looking to land with oomph, punching through their opponent…fighting with bad intentions.

Hey, skills pay the bills, we get that, and we don’t demean it. But this is the hurt game, and so I think it’s fair to say that the matchups that promise to feature all-in investments will do more to get people fired up for the fights than physical chess matches.

Wilder hit the famed and fabled Gleason’s Gym in DUMBO, Brooklyn, with NYC fight game royalty Bruce Silverglade presiding over the media gathering on Tuesday evening. Of course, in this age, the video getters out-number print media, 80-20, so Wilder mostly got questions from You Tubers and podcasters and the like.

Before the Alabama slamma took queries, he stretched, and then did pad work with his crew. Trainers Jay Deas and Mark Breland took turns absorbing power cracks from the leader of the Bomb Squad, and the WBC heavyweight tilist got a solid sweat going in the throwback fight factory, in existence since 1937.

And, indeed, these are that, at least financially, for the A siders, and even some lucky B siders, who find themselves the beneficiaries of bidding wars, as platforms and OTT bases bosses scramble to build up and out.

Breland, before he headed into the ring to work out his kid, told RING that he thinks Wilder is dialed in. This shouldn’t be too heavy a lift for the slugger, he told me, and who knows, it might not last more than three minutes. “Two rounds,” the soft spoken fight-game royalty said. “Maybe one if he really is feeling it.”

We talked about this certainty, how the people, the masses, they like these conclusive finishes. OK, no, not as conclusive as Wilder sometimes gets at. He will bring up how he hits so hard, that he can envision dealing out a fatal level of trauma. In fact, he says, he thinks finishing off a foe would burnish his legacy. Yeah, that makes me cringe too, but for some reason, that’s part and parcel of his mindset at this stage of his life.

These ARE heady times; he’s been offered a ludicrous lump sum from the DAZN crew but decided to stay in the fold, in the PBC-Showtime-Fox sphere, and believes that his law of attraction thinking will get him showdowns with the Anthony Joshuas and Tyson Furys which will pay him in excess of what DAZN offered. In the meantime, Showtime and whoever else scrambled to raise enough cash to satisfy Wilders’ ask to meet Breazeale, who is the mandatory title challenger as directed by the WBC. 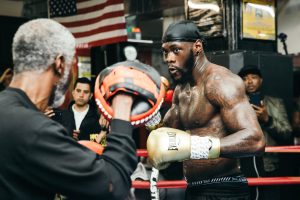 Back to Breland – we chatted about how some guys get it, and crave it. They understand that the people want conclusiveness…and they are built the right way to deliver it. Breland patted his heart, indicating that it’s in there, it’s inside, it’s about your desire as much as a skill set, quote unquote. We talked about a couple recent fights in which fans didn’t see that heart. Deontay has the requisite fire, though, he declared to me.

The champ took queries from media, while still dripping sweat from his in-ring activity. He took a shot at Breazeale, telling us that Breazeale isn’t a top three, or a top five heavy. He’s in the bottom of the pack, the 40-0-1 boxer shared, and isn’t the caliber of athlete who’ll be able to hang with him, in his kind. “It’s gonna be in dramatic fashion,” the 33-year-old striker promised, going out on a limb and saying a KO will come. “His life is on the line for this fight, and I do mean his life. Still tryin’ to get me a body on my record!”

OK, yeah, I’m hoping he doesn’t get his wish…but fans of the stoppage should get their preference on Saturday night. “Speak it, believe it, receive it,” that’s one of his mantras, and I will hazard the guess that Breazeale could well receive a right hand that makes it an early night. “This is the only sport you can kill a man and get paid for it at the same time, ” Wilder said, “it’s legal, so why not use my right to do so?”