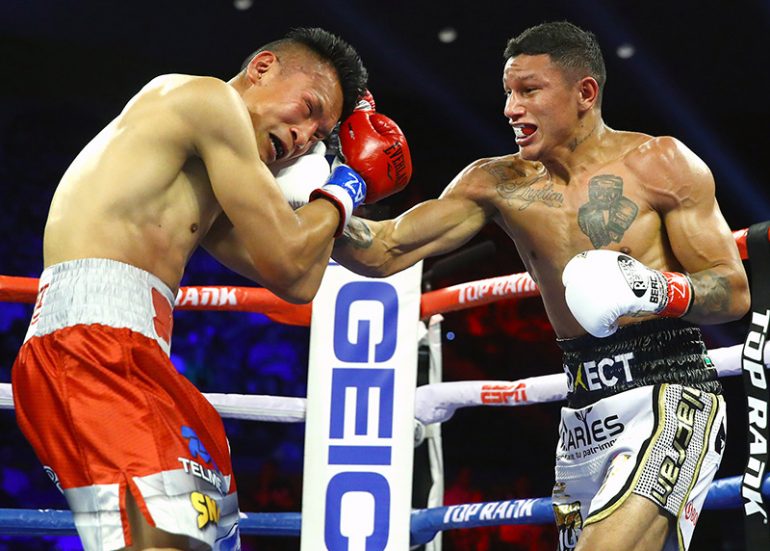 Miguel Berchelt lands an uppercut against Francisco Vargas during their rematch in Tucson, Arizona. Photo by Mikey Williams-TOP RANK
11
May
by Norm Frauenheim

TUCSON – They were rematches without any reversals. It was more of the same for Miguel Berchelt and Emanuel Navarrete.

The difference in both sequels was in the way each winner accomplished the task. The rematches left no doubt or any reason to even wonder about trilogy. Each rematch was more definitive for the victor and a lot more painful for the vanquished. The losses were punishing, so much so that each bout ended in the same manner.

The respective corners ended it, Vargas corner before the seventh round and Dogboe’s corner with 58 seconds left in the 12-round bout. 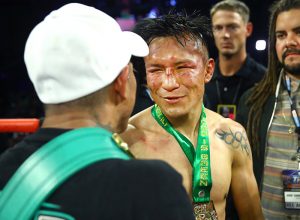 Vargas’ face told the story of the rematch. Photo by Mikey Williams-TOP RANK

“My trainer did what he was supposed to,’’ Vargas said. “He stepped in to protect me.’’

Vargas (25-2-2, 18 KOs) pretty much said it all, for himself and Dogboe. Vargas trainer, Joel Diaz, didn’t need to see any more of the pounding that Vargas had begun to take from the stronger Berchelt (36-1, 32 KOs).

“His corner did the right thing when they kept him from taking more punishwent’’ said Berchelt, who collected $600,000, $450,000 more than Vargas’ $150,000 purse, according to contract filed with the Arizona Commission.

For the emerging Berchelt, the victory created a whole host of new opportunities. He has been mentioned as a potential opponent for pound-for-pound contender Vasiliy Lomachenko. In post-fight interviews, Berchelt said he wanted a shot at the winner Masayuki Ito-Jamel Herring on May 25 for the WBO title.

In the night’s first rematch, Navarrete (27-1, 23 KOs) took the storm out of Dogboe (20-2, 14 KOs) and administered a royal beating of the Ghana fighter who calls himself The Royal Storm. The real surprise was that Dogboe had less of a chance in the rematch than he had in losing a decision to Navarrete in December.

The bigger Navarrete controlled distance and pace. The Mexican’s power shots to the body and head left Dogboe stumbling across the canvas throughout most of the 12 rounds. In the sixth, Navarrete’s uppercut knocked Dogboe off his feet and onto the bottom rope. 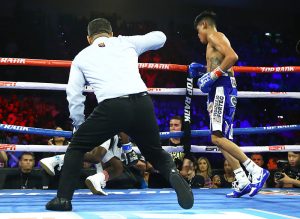 If not for that rope, Dogboe might have found himself face down on a ringside table. It was scored a knockdown. Somehow, Dogboe stayed upright, but he was an unconscious man walking, walking straight into more of Navarrete’s arsenal.

By the eighth, the end looked to be inevitable. In the 12th, the inevitable landed, first with more Navarrete shots that dropped Dogboe on hands and knees. Again, Dogboe got up. But this time his corner had seen enough. At 2:02 of the 12th, it was over, leaving no doubt about Navarrete’s credentials.

One thing is for sure: Dogboe said is moving up in weight to 126 pounds.

“Thanks to Navarrete,’’ said Dogboe, who also might have been saying thanks to an immediate future that won’t include another fight with the Mexican.

Best Of The Undercard

Miguel Marriaga has appeared in title fights, main events and undercards. On Saturday, it was an undercard. The Colombian lightweight (28-3, 24 KOs), who fought and lost to champions Lomachenko and Oscar Valdez Jr. in 2017, administered a painful succession of body shots, sending fellow Colombian Ruben Cervera (10-2, 9 KOs) to the canvas twice in the second. Cervera returned the favor in the third, scoring a knockdown with what looked like a push and a punch. But Marriaga’s body blows kept coming and kept hurting. It ended with Cervera sitting on his stool, unable to answer the bell for the fourth round.

“He was a last-minute opponent that came a little heavier than what I’m used to fighting, and that’s why I focused on punishing the body. He connected well with a solid punch and I went down, but he didn’t hurt me badly. My plan was to punish him with body shots until he did not want to continue and finally he didn’t come out to fight following third round.”

“I want a world title fight. I want to fulfill my dream of becoming a world champion. All the champions and 126-pound contenders are at the same level, so I’m willing to fight any of them. I’m here to fight the best.”

Phoenix junior-featherweight Carlos Castro continues to climb up in the rankings and into the conversation. His unbeaten record is hard to ignore. And it stayed that way with a thorough 10-round performance in a 100-89, 98-91, 100-89 decision over Mexican Mario Diaz. Castro (23-0, 9 KOs), who is ranked among the top-10 contenders by two acronyms, scored an early knockdown, employed a consistently quick jab and shook off repeated counters from Diaz (18-3, 7 KOs) in the late rounds.

Maryland junior-welterweight Mykal Fox (20-1, 5 KOs) often looked as if he were about to be slam-dunked by Fazliddin Gaibnazarov (7-1, 4 KOs), who has the physical dimensions of a small forward. But Fox darted in, darted out and scored just enough to win 96-92, 95-93, 96-92 decision over Gaibnazarov, of Uzbekistan.

It didn’t take long for the card to take on the city’s identity. Tucson calls itself The Old Pueblo. That also means old school, which is what Manny Guajardo was in scoring a resilient four-round decision over Johnathan Espino.Guajardo (5-0), a Tucson middleweight, rocked Espino early. But Espino (2-4, 2 KOs), of Escondido, Calif., came back with some counters of his own in the third and fourth. In the end, however, the momentum and the fight belonged to Guarjardo, who won a hard-fought majority decision in the second bout on the card.

The card’s afternoon opener ended quickly. The matinee lasted a round. Mexican super-lightweight Miguel Parra (17-1-1, 11 KOs) knocked down Nicaraguan David Morales (13-11, 13 KOs) moments after the first bell at Tucson Arena. Morales got up slowly. There was no hiding the obvious. Morales trainer threw in the towel seconds before the start of the second round.