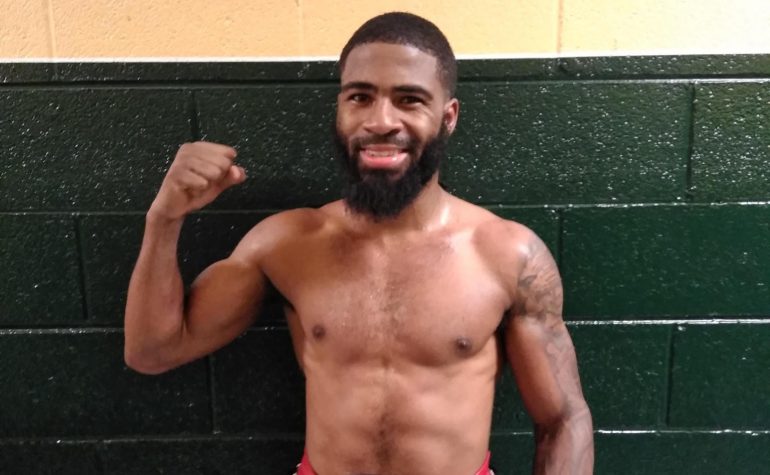 The IBO super bantamweight belt just looked natural around his waist for some reason Saturday night in one of the green-walled warrens of EagleBank Arena on the George Mason University campus.

In the biggest fight of his life to date, with certainly more ahead, “Scooter” looked the best he’s ever looked, dominating 38-year-old IBO super bantamweight champion Paulus Ambunda—now former champ—by unanimous scores of 120-107, which included an eighth-round knockdown.

Fulton has certainly placed himself in the argument at super bantamweight among the division’s elite, like Daniel Roman, Guillermo Rigondeaux, Rey Vargas, Emanuel Navarrete and Isaac Dogboe.

“It was easier than I expected, and Ambunda is a tough competitor,” Fulton said. “I felt in control from the first round on, because he couldn’t get away from the jab. Once I’m able to hit you with the jab, the fight is done. I was waiting to do more, and once I was able to do some extra, he was going down.”

Ambunda did go down, put there by a looping right in the eighth, and got up under some shaky legs. Ambunda kept his career mark of never having been stopped, but Fulton can say he came the closest.

“This is a whole new world, and a whole new legacy,” Fulton said. “I want to fight three more times by the end of the year, looking to get back into the ring in July. From here on out, I’m going to be on TV.

“This is still hitting me. But the belt feels great around my waist. It fits naturally.”

Fulton looked strong. He had a great camp, looking formidable late in the fight with the help of Wahid Rahim and Steve Maltepes, who supplied extra conditioning.

“This is the best performance I’ve seen from Scooter by far,” Rahim said. “What Scooter did was listen. He had an opportunity and he took advantage of it. I’ve watched guys who should have been world champions get in certain situations. They didn’t seize the moment when they had the chance to be world champions—and Scooter did that tonight.

“Scooter listened in camp. He listened to Hamza (Muhammad, Fulton’s trainer). This was a huge spark for Scooter. It’s a great start to an amazing story, and I have to give Steve Maltepes a lot of credit for it, too. I go way back with Steve. I worked with Steve when I fought. Steve worked with us and he gave us the key to Pandora’s box.”

Knowing Ambunda’s experience, Muhammad started feeling comfortable in the third in a controlling performance where one round mirrored the next. Ambunda couldn’t keep up with the faster Fulton, who varied his attack with punishing jabs and looping rights. In the middle rounds, Fulton dropped down and softened the body with wide shots to the ribs. It was a Fulton circling right that dropped Ambunda in the eighth.

“This is the best I’ve ever seen Scooter,” Muhammad said. “In his biggest moment, he looked his best. I had a sense we were in control in the third round. We were hitting Ambunda with the shots that we wanted to hit him with.

“Then, Ambunda began stepping back. And that was the first time Scooter’s been 12 rounds. We put in a lot at camp and it showed. He got stronger as the rounds went on and finished strong.”

In the first fight of the night, super middleweight Kevin Womack Jr. (9-17-4, 7 KOs) knockout Mark Duncan (3-2, 3 KOs) at 1:39 of the second round. It was a frightening way to start the evening. A loser in his last three fights, Womack plowed Duncan with a right to the jaw. There was a delay of a second before Duncan collapsed to the canvas.